The First Report of Genetic and Structural Diversities in the SPRN Gene in the Horse, an Animal Resistant to Prion Disease

Equine neuroaxonal dystrophy/equine degenerative myeloencephalopathy (eNAD/EDM) is an inherited neurodegenerative disorder of unknown etiology. Clinical signs of neurological deficits develop within the first year of life in vitamin E (vitE) deficient horses. A genome-wide association study (GWAS) was carried out using 670,000 SNP markers in 27 case and 42 control Quarter Horses. Two markers, encompassing a 2.5 Mb region on ECA7, were associated with the phenotype (p = 2.05 × 10-7 and 4.72 × 10-6). Within this region, caytaxin (ATCAY) was identified as a candidate gene due to its known role in Cayman Ataxia and ataxic/dystonic phenotypes in mouse models. Whole-genome sequence data in four eNAD/EDM and five unaffected horses identified 199 associated variants within the ECA7 region. MassARRAY® genotyping was performed on these variants within the GWAS population. The three variants within ATCAY were not concordant with the disease phenotype. No difference in expression or alternative splicing was identified using qRT-PCR in brainstem across the ATCAY transcript. Atcayji-hes mice were then used to conduct functional analysis in a second animal model. Histologic lesions were not identified in the central nervous system of Atcayji-hes mice. Additionally, supplementation of homozygous Atcayji-hes mice with 600 IU/day of dl-α-tocopheryl acetate (vitE) during gestation, lactation, and adulthood did not improve the phenotype. ATCAY has therefore been excluded as a candidate gene for eNAD/EDM. View Full-Text
Keywords: alpha-tocopherol; Cayman Ataxia; equine degenerative myeloencephalopathy; genetics; horse; vitamin E alpha-tocopherol; Cayman Ataxia; equine degenerative myeloencephalopathy; genetics; horse; vitamin E
►▼ Show Figures 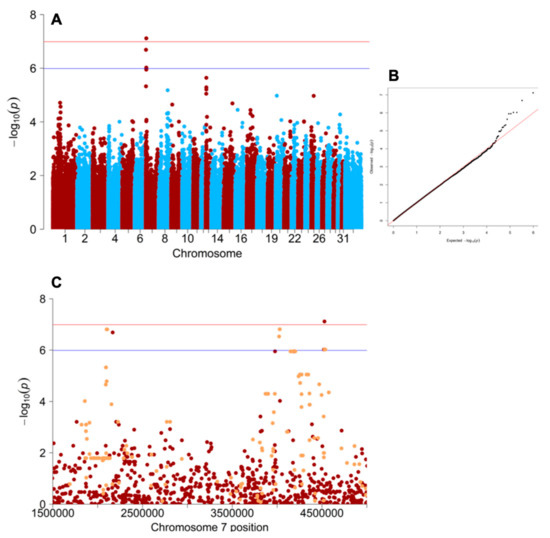