Overexpression of Two Members of D7 Salivary Genes Family is Associated with Pyrethroid Resistance in the Malaria Vector Anopheles Funestus s.s. but Not in Anopheles Gambiae in Cameroon

Prions are infectious, self-perpetuating protein conformers. In mammals, pathological aggregation of the prion protein causes incurable neurodegenerative disorders, while in yeast Saccharomyces cerevisiae, prion formation may be neutral or even beneficial. According to the prevailing contemporary point of view, prion formation is considered to be a functional inactivation of the corresponding protein whose conformational state shifts from the functional monomeric one to the infectious aggregated one. The Swi1 protein forms the [SWI+] prion and belongs to the nucleosome remodeler complex SWI/SNF controlling the expression of a significant part of the yeast genome. In this work, we performed RNA sequencing of isogenic S. cerevisiae strains grown on the media containing galactose as the sole carbon source. These strains bore the [SWI+] prion or had its structural gene SWI1 deleted. The comparative analysis showed that [SWI+] affects genome expression significantly weaker as compared to the SWI1 deletion. Moreover, in contrast to [SWI+], the SWI1 deletion causes the general inhibition of translation-related genes expression and chromosome I disomy. At the same time, the [SWI+] prion exhibits a specific pattern of modulation of the metabolic pathways and some biological processes and functions, as well as the expression of several genes. Thus, the [SWI+] prion only partially corresponds to the loss-of-function of SWI1 and demonstrates several gain-of-function traits. View Full-Text
Keywords: prion; amyloid; yeast; S. cerevisiae; transcriptome; RNA-Seq; Swi1; [SWI+]; SWI/SNF prion; amyloid; yeast; S. cerevisiae; transcriptome; RNA-Seq; Swi1; [SWI+]; SWI/SNF
►▼ Show Figures 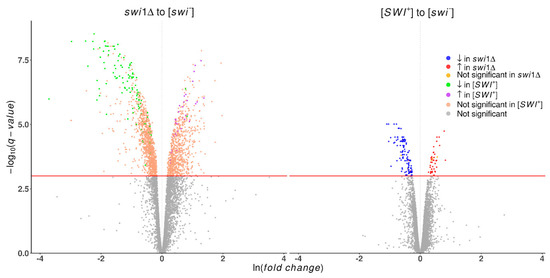