Micromanagement of Developmental and Stress-Induced Senescence: The Emerging Role of MicroRNAs
Previous Article in Special Issue

Overexpression of Two Members of D7 Salivary Genes Family is Associated with Pyrethroid Resistance in the Malaria Vector Anopheles Funestus s.s. but Not in Anopheles Gambiae in Cameroon

D7 family proteins are among the most expressed salivary proteins in mosquitoes. They facilitate blood meal intake of the mosquito by scavenging host amines that induce vasoconstriction, platelet aggregation and pain. Despite this important role, little information is available on the impact of insecticide resistance on the regulation of D7 proteins and consequently on the blood feeding success. In this study, real-time quantitative polymerase chain reaction (qPCR) analyses were performed to investigate how pyrethroid resistance could influence the expression of genes encoding D7 family proteins in Anopheles gambiae and Anopheles funestus s.s. mosquitoes from Elon in the Central Cameroon. Out of 328 collected mosquitoes, 256 were identified as An. funestus sl and 64 as An. gambiae sl. Within the An. funestus group, An. funestus s.s. was the most abundant species (95.95%) with An. rivulorum, An. parensis and An. rivulorum-like also detected. All An. gambiae s.l mosquitoes were identified as An. gambiae. High levels of pyrethroid resistance were observed in both An. gambiae and An. funestus mosquitoes. RT-qPCR analyses revealed a significant overexpression of two genes encoding D7 proteins, D7r3 and D7r4, in pyrethroids resistant An. funestus. However, no association was observed between the polymorphism of these genes and their overexpression. In contrast, overall D7 salivary genes were under-expressed in pyrethroid resistant An. gambiae. This study provides preliminary evidences that pyrethroid resistance could influence blood meal intake through over-expression of D7 proteins although future studies will help establishing potential impact on vectorial capacity. View Full-Text
Keywords: D7 salivary proteins; gene expression; insecticide resistance; pyrethroids; Anopheles gambiae; Anopheles funestus; malaria disease D7 salivary proteins; gene expression; insecticide resistance; pyrethroids; Anopheles gambiae; Anopheles funestus; malaria disease
►▼ Show Figures 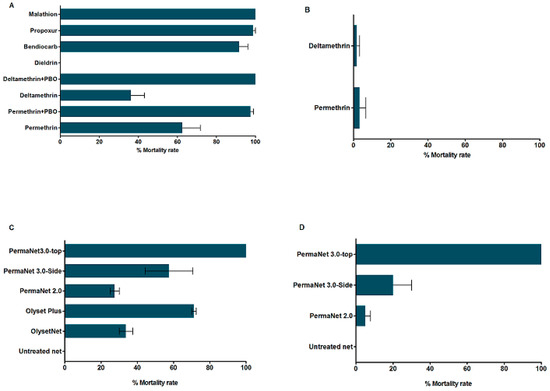