Beyond Biodiversity: Can Environmental DNA (eDNA) Cut It as a Population Genetics Tool?
Next Article in Special Issue

:
Personalized medicine is focused on research disciplines which contribute to the individualization of therapy, like pharmacogenomics and pharmacotranscriptomics. Acute lymphoblastic leukemia (ALL) is the most common malignancy of childhood. It is one of the pediatric malignancies with the highest cure rate, but still a lethal outcome due to therapy accounts for 1–3% of deaths. Further improvement of treatment protocols is needed through the implementation of pharmacogenomics and pharmacotranscriptomics. Emerging high-throughput technologies, including microarrays and next-generation sequencing, have provided an enormous amount of molecular data with the potential to be implemented in childhood ALL treatment protocols. In the current review, we summarized the contribution of these novel technologies to the pharmacogenomics and pharmacotranscriptomics of childhood ALL. We have presented data on molecular markers responsible for the efficacy, side effects, and toxicity of the drugs commonly used for childhood ALL treatment, i.e., glucocorticoids, vincristine, asparaginase, anthracyclines, thiopurines, and methotrexate. Big data was generated using high-throughput technologies, but their implementation in clinical practice is poor. Research efforts should be focused on data analysis and designing prediction models using machine learning algorithms. Bioinformatics tools and the implementation of artificial i Lack of association of the CEP72 rs924607 TT genotype with intelligence are expected to open the door wide for personalized medicine in the clinical practice of childhood ALL.
Keywords:
pharmacogenomics; pharmacotranscriptomics; high-throughput analysis; childhood acute lymphoblastic leukemia

Emerging high-throughput technologies, which enable the analysis of individual genomes, epigenomes, transcriptomes, proteomes, metabolomes, and microbiomes, so called “omics”, have brought great advancements in the field of biomedical sciences [1]. Moreover, multiple genomic, epigenomic, transcriptomic, and proteomic markers have already been included in routine diagnostic, prognostic, and therapeutic protocols for a great number of diseases [2,3]. This is important for designing new therapies, like molecular and gene therapy, which is the basis of personalized medicine.
Pharmacogenetics and pharmacogenomics are staples of personalized medicine. The goal of pharmacogenomics is to create an effective therapy strategy based on the genomic profile of a patient. Pharmacotranscriptomics is a field of study which investigates associations between variations in the transcriptome with the pharmacokinetics and the pharmacodynamics of drugs to detect interindividual differences between patients, so that a more efficient dose regimen of a drug can be established.
There are two main approaches in pharmacogenomics and pharmacotranscriptomics: One based on candidate pharmacogenes/pharmacotranscripts, the other based on testing the entire genome/transcriptome (genome-wide association studies/transcriptome-wide association studies (GWAS/TWAS)) for pharmacogenomic/pharmacotranscriptomic markers. Candidate genes/transcripts studies have high statistical power, but their weakness is the fact that they lack the capacity to discover new genes or transcripts. On the contrary, the strength of GWAS/TWAS lies in the ability to identify relevant pharmacogenomic or pharmacotranscriptomic markers regardless of whether their function was previously known, but they have low statistical power due to the number of independent tests performed [4].
Acute lymphoblastic leukemia (ALL) is the most common malignancy of childhood, accounting for around 30% of all childhood cancers and around 80% of all childhood leukemia. It is one of the pediatric malignancies with the highest cure rate [5]. However, more than 10% of patients experience an unfavorable outcome.
Considering that more efficient treatment of pediatric ALL has not been achieved by the introduction of novel drugs into the treatment protocols, but instead by trying to diminish the adverse effects of the drugs that are already included in the protocols, it is understandable that pharmacogenomics and pharmacotranscriptomics have become very important in this field.
In the current review, we present the results of pharmacogenomics and pharmacotranscriptomics studies conducted in pediatric ALL using high-throughput technologies. We aim to summarize the contributions of these novel technologies in this field to find out what additional opportunities they offer and to suggest future directions.

Acute lymphoblastic leukemia (ALL) is a rare disease, representing about one fourth of all cancers in children. The incidence rate of ALL among children aged up to 14 years is about 41:1,000,000, with a peak in children aged 2–7 years. Biologically, the disease originates from T- and B-lymphoid precursors of the bone marrow [6].
In childhood ALL, almost all patients achieve remission, and about 85% of the patients are expected to be cured with modern treatment protocols [7]. The treatment of the patients with ALL is usually tailored according to risk group stratification defined by clinical and laboratory features [8]. Standard treatment options for childhood ALL encompass historically validated cytotoxic agents grouped into so called therapeutic phases or elements. These include remission induction chemotherapy agents—vincristine, a corticosteroid drug, anthracyclines, and asparaginase [9]. Post-induction (or consolidation) treatment options for childhood ALL include cyclophosphamide, cytarabine, 6-mercaptopurine, and high-dose methotrexate. Most protocols also include an intensification phase, utilizing the same drugs, namely vincristine, corticosteroids, anthracyclines, and cytarabine, combined with another thiopurine, such as 6-thioguanine [10]. After completing intensive treatment phases, the patient is due for maintenance therapy, whose backbone is based on daily oral 6-mercaptopurine and weekly oral methotrexate.
Hematopoietic stem cell transplantation also has a role in the treatment of ALL patients, such as those with unfavorable clinical and laboratory features as well as patients with relapsed disease.
Efficient therapy causes side effects in 75% of childhood ALL patients [11]. Aside from this, chemotherapy leads to delayed side effects and even permanent sequelae [12,13]. It is estimated that 1–3% of pediatric ALL patients have a lethal outcome due to the consequences of treatment side effects and not due to the consequence of the disease [8,14].
It is necessary to emphasize that a patient with a malignancy has two genomes: The constitutional genome, characteristic for all cells except the tumor clone; the other is the tumor genome that contains acquired genetic variants and which changes during the evolution of tumor clones. Variants in the constitutional genome and germinative variants influence the transport and the metabolism of drugs, making them responsible for the efficacy of the drugs and the side effects, while somatic mutations are responsible for the resistance of the tumor to drugs [15].
The side effects of therapy in pediatric ALL are a consequence of the insufficient specificity of drugs, the small therapeutic index of drugs, and the high exposure and long-term application of drugs. The most frequent complications are hypersensitive reactions, neuro-, cardio-, and hepatotoxicity, the toxicity of the digestive tract and kidneys, as well as myelosuppression and osteonecrosis [11]. General toxicity can be diminished by patient stratification, while individual patient toxicity caused by genetic variants of the genes responsible for drug metabolism can be prevented with specific genetic tests and individually tailored chemotherapy [16,17].

This research has been supported by grant III41004 from the Ministry of Education and Science, Republic of Serbia. 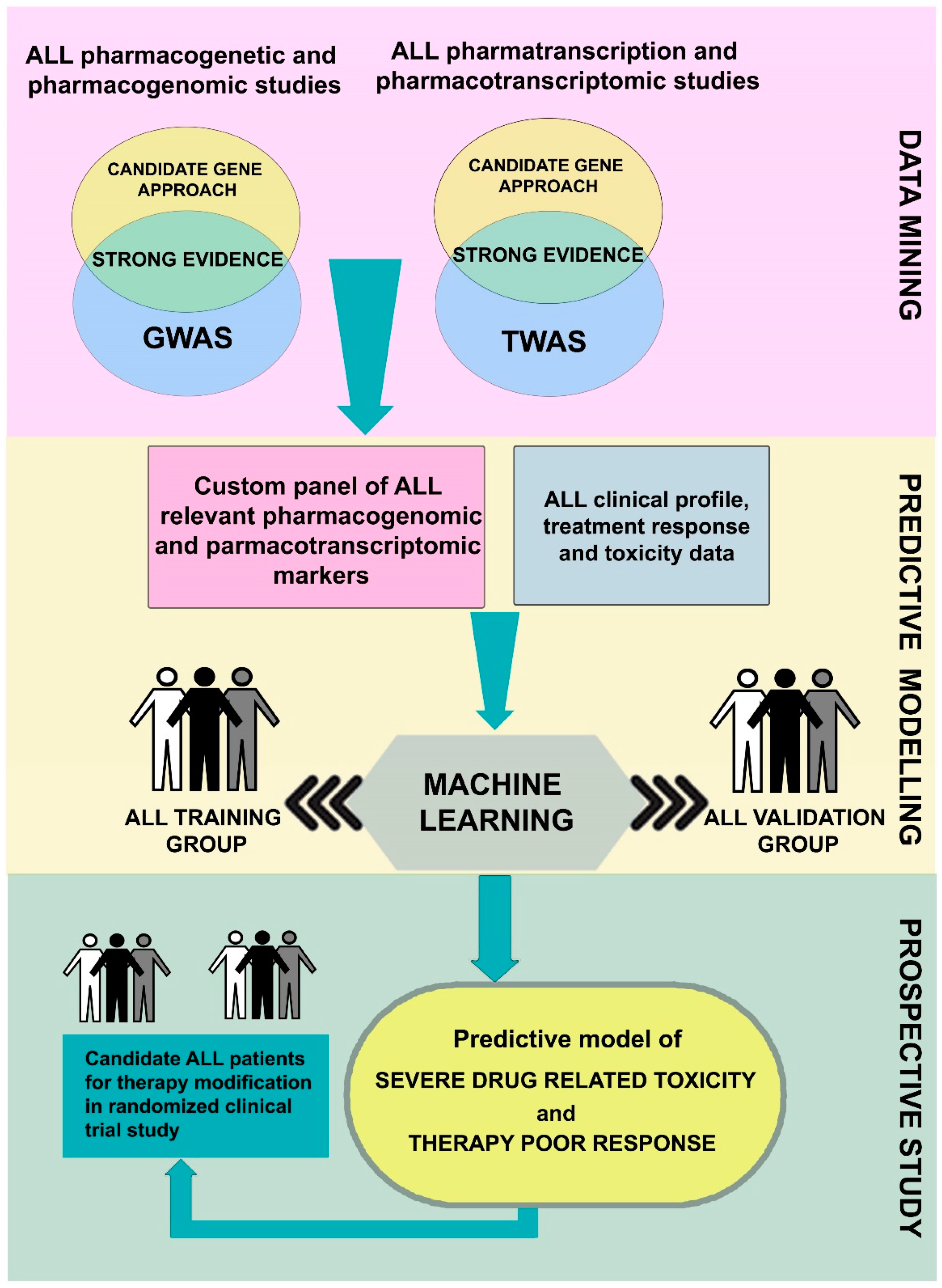