Gloeostereum incarnatum is a precious edible mushroom that is widely grown in Asia and known for its useful medicinal properties. Here, we present a high-quality genome of G. incarnatum using the single-molecule real-time (SMRT) sequencing platform. The G. incarnatum genome, which is the first complete genome to be sequenced in the family Cyphellaceae, was 38.67 Mbp, with an N50 of 3.5 Mbp, encoding 15,251 proteins. Based on our phylogenetic analysis, the Cyphellaceae diverged ~174 million years ago. Several genes and gene clusters associated with lignocellulose degradation, secondary metabolites, and polysaccharide biosynthesis were identified in G. incarnatum, and compared with other medicinal mushrooms. In particular, we identified two terpenoid-associated gene clusters, each containing a gene encoding a sesterterpenoid synthase adjacent to a gene encoding a cytochrome P450 enzyme. These clusters might participate in the biosynthesis of incarnal, a known bioactive sesterterpenoid produced by G. incarnatum. Through a transcriptomic analysis comparing the G. incarnatum mycelium and fruiting body, we also demonstrated that the genes associated with terpenoid biosynthesis were generally upregulated in the mycelium, while those associated with polysaccharide biosynthesis were generally upregulated in the fruiting body. This study provides insights into the genetic basis of the medicinal properties of G. incarnatum, laying a framework for future characterization of bioactive proteins and pharmaceutical uses of this fungus. View Full-Text
Keywords: Gloeostereum incarnatum; whole genome sequencing; PacBio; secondary metabolite; cytochrome P450 enzyme (CYP); terpenoid Gloeostereum incarnatum; whole genome sequencing; PacBio; secondary metabolite; cytochrome P450 enzyme (CYP); terpenoid
►▼ Show Figures 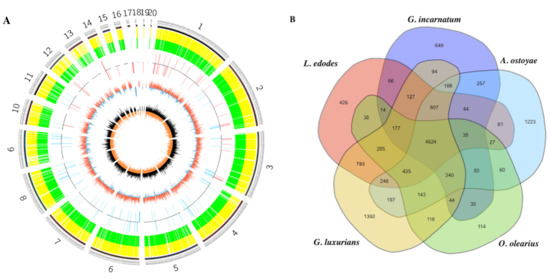