The domain of unknown function (DUF) superfamily encodes proteins of unknown functions in plants. Among them, DUF668 family members in plants possess a 29 amino-acid conserved domain, and this family has not been described previously. Here, we report this plant-specific novel DUF668 gene family containing 12 OsDUF668 genes in rice (Oryza sativa) and 91 DUF668s for the other seven plant species. In our study, DUF668 genes were present in both dicot and monocot plants, indicating that DUF668 is a conserved gene family that originated by predating the dicot–monocot divergence. Based on the gene structure and motif composition, the DUF668 family consists of two distinct clades, I and II in the phylogenetic tree. Remarkably, OsDUF668 genes clustered on the chromosomes merely show close phylogenetic relationships, suggesting that gene duplications or collinearity seldom happened. Cis-elements prediction display that over 80% of DUF668s contain phytohormone and light responsiveness factors. Further comprehensive experimental analyses of the OsDUF668 family are implemented in 22 different tissues, five hormone treatments, seven environmental factor stresses, and two pathogen-defense related stresses. The OsDUF668 genes express ubiquitously in analyzed rice tissues, and seven genes show tissue-specific high expression profiles. All OsDUF668s respond to drought, and some of Avr9/Cf-9 rapidly elicited genes resist to salt, wound, and rice blast with rapidly altered expression patterns. These findings imply that OsDUF668 is essential for drought-enduring and plant defense. Together, our results bring the important role of the DUF668 gene family in rice development and fitness to the fore. View Full-Text
Keywords: DUF668 gene family; rice; phylogenetic analysis; expression patterns; stress DUF668 gene family; rice; phylogenetic analysis; expression patterns; stress
►▼ Show Figures 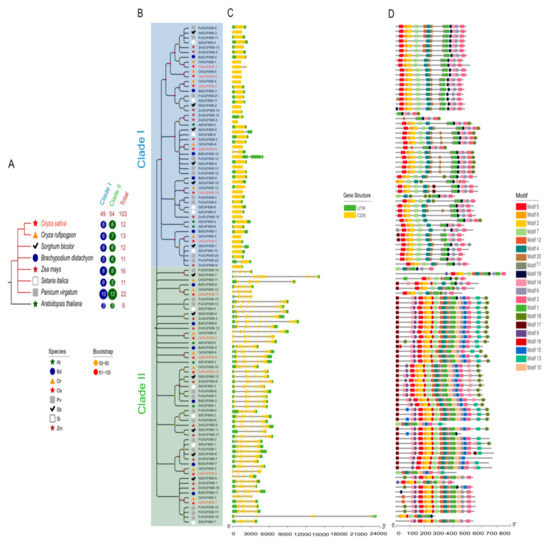