Differential Expression of Genes Related to Sexual Determination Can Modify the Reproductive Cycle of Astyanax scabripinnis (Characiformes: Characidae) in B Chromosome Carrier Individuals

The species complex Astyanax scabripinnis is one of the most studied with respect to origin, distribution, and frequency of B chromosomes, and is considered a model organism for evolutionary studies. Research using population inferences about the occurrence and frequency of the B chromosome shows seasonal variation between sexes, which is associated with the presence of this supernumerary element. We hypothesized that the B chromosome could influence the sex ratio of these animals. Based on this assumption, the present work aimed to investigate if differences exist among levels of gene expression with qRT-PCR of the amh (associated with testicular differentiation) and foxl2a (associated with ovarian differentiation) genes between B-carrier and non-B-carrier individuals. The results showed that for the amh gene, the difference in expression between animals with B chromosomes was not accentuated compared to that in animals without this chromosome. Expression of foxl2a in B-carrier females, however, was reduced by 73.56% compared to females that lacked the B chromosome. Males had no difference in expression of the amh and foxl2a genes between carriers and non-carriers of the B chromosome. Results indicate that the presence of B chromosomes is correlated with the differential expression of sex-associated genes. An analysis of these results integrated with data from other studies on the reproductive cycle in the same species reveals that this difference in expression may be expanding the reproductive cycle of the species. View Full-Text
Keywords: fishes; supernumerary chromosomes; sexual differentiation; foxl2a; amh fishes; supernumerary chromosomes; sexual differentiation; foxl2a; amh
►▼ Show Figures 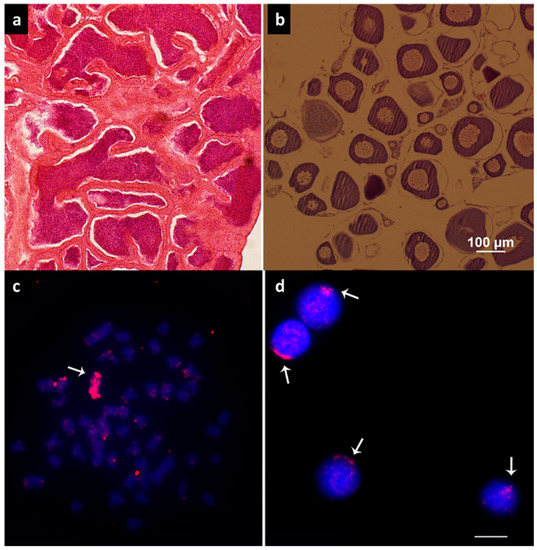