The genus Austrolebias (Cyprinodontiformes: Rivulidae) represents a specious group of taxa following annual life cycles in the neotropical ichthyofauna. They live in temporary ponds and each generation must be completed in a few months, depending on environmental stochasticity. Annual fish survive the dry season through diapausing eggs buried in the substrate of these ponds. A hypothesized bimodal hybrid zone between two taxa of the genus, A. charrua and A. reicherti from Dos Patos Merin lagoon system, was recently proposed based on genetics and morphological analyses. However, hundreds of additional nuclear molecular markers should be used to strongly support this hypothesized bimodal pattern. In the present paper, we conducted RNA-seq-based sequencing of the transcriptomes from pools of individuals of A. charrua, A. reicherti and their putative natural hybrids from the previously characterized hybrid zone. As a result, we identified a set of 111,725 SNP (single nucleotide polymorphism) markers, representing presumably fixed allelic differences among the two species. The present study provided the first panel of 106 SNP markers as a single diagnostic multiplex assay and validated their capacity to reconstruct the patterns of the hybrid zone between both taxa. These nuclear markers combined with Cytb gene and morphological analyses detected a population structure in which some groups among the hybrid swarms showed different level of introgression towards one or the other parental species according to their geographic distribution. High-quality transcriptomes and a large set of gene-linked SNPs should greatly facilitate functional and population genomics studies in the hybrid zone of these endangered species. View Full-Text
Keywords: annual killifish; hybrid zone; Austrolebias; transcriptome-based SNP; discovery; validation; morphology; conservation annual killifish; hybrid zone; Austrolebias; transcriptome-based SNP; discovery; validation; morphology; conservation
►▼ Show Figures 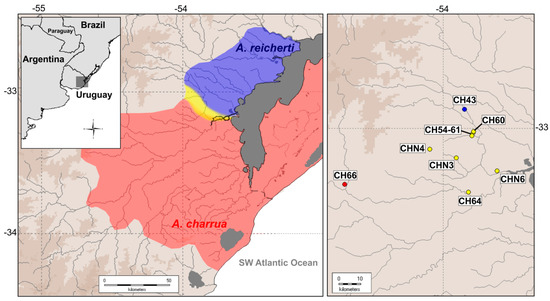