Cyclocarya paliurus (Batal.) Iljinskaja, a unique species growing in southern China, is a multi-function tree species with medicinal, healthcare, material, and ornamental values. So far, sexual reproduction is the main method for extensive cultivation of C. paliurus plantations, but this is limited by low seed plumpness resulted from the character of heterodichogamy. Phenological observations have revealed the asynchronism of flower development in this species. However, its molecular mechanism remains largely unknown. To reveal molecular mechanism of heterodichogamy in C. paliurus, transcriptome of female (F) and male (M) buds from two mating types (protandry, PA; protogyny, PG) at bud break stage were sequenced using Illumina Hiseq 4000 platform. The expression patterns of both 32 genes related to flowering and 58 differentially expressed transcription factors (DETFs) selected from 6 families were divided four groups (PG-F, PG-M, PA-F, and PA-M) into two categories: first flowers (PG-F and PA-M) and later flowers (PA-F and PG-M). The results indicated that genes related to plant hormones (IAA, ABA, and GA) synthesis and response, glucose metabolism, and transcription factors (especially in MIKC family) played significant roles in regulating asynchronism of male and female flowers in the same mating type. The expression of DETFs showed two patterns. One contained DETFs up-regulated in first flowers in comparison to later flowers, and the other was the reverse. Nine genes related to flowering were selected for qRT-PCR to confirm the accuracy of RNA-seq, and generally, the RPKM values of these genes were consistent with the result of qRT-PCR. The results of this work could improve our understanding in asynchronism of floral development within one mating type in C. paliurus at transcriptional level, as well as lay a foundation for further study in heterodichogamous plants. View Full-Text
Keywords: Cyclocarya paliurus; heterodichogamy; RNA-seq; differentially expressed transcription factors Cyclocarya paliurus; heterodichogamy; RNA-seq; differentially expressed transcription factors
►▼ Show Figures 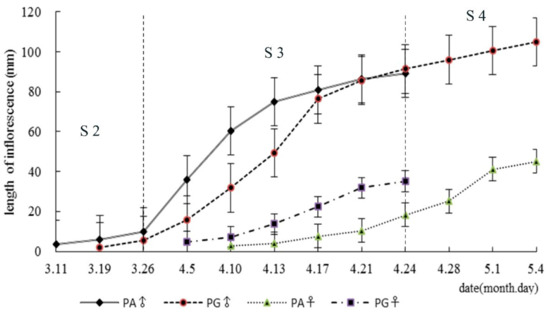