Mixing Genetically and Morphologically Distinct Populations in Translocations: Asymmetrical Introgression in A Newly Established Population of the Boodie (Bettongia lesueur)

In an era of unprecedented global change, exploring patterns of gene expression among wild populations across their geographic range is crucial for characterizing adaptive potential. RNA-sequencing studies have successfully characterized gene expression differences among populations experiencing divergent environmental conditions in a wide variety of taxa. However, few of these studies have identified transcriptomic signatures to multivariate, environmental stimuli among populations in their natural environments. Herein, we aim to identify environmental and sex-driven patterns of gene expression in the Tasmanian devil (Sarcophilus harrisii), a critically endangered species that occupies a heterogeneous environment. We performed RNA-sequencing on ear tissue biopsies from adult male and female devils from three populations at the extremes of their geographic range. There were no transcriptome-wide patterns of differential gene expression that would be suggestive of significant, environmentally-driven transcriptomic responses. The general lack of transcriptome-wide variation in gene expression levels across the devil’s geographic range is consistent with previous studies that documented low levels of genetic variation in the species. However, genes previously implicated in local adaptation to abiotic environment in devils were enriched for differentially expressed genes. Additionally, three modules of co-expressed genes were significantly associated with either population of origin or sex. View Full-Text
Keywords: RNA-sequencing; conservation genomics; geographic variation; Tasmanian devil; population level; sex-specific expression RNA-sequencing; conservation genomics; geographic variation; Tasmanian devil; population level; sex-specific expression
►▼ Show Figures 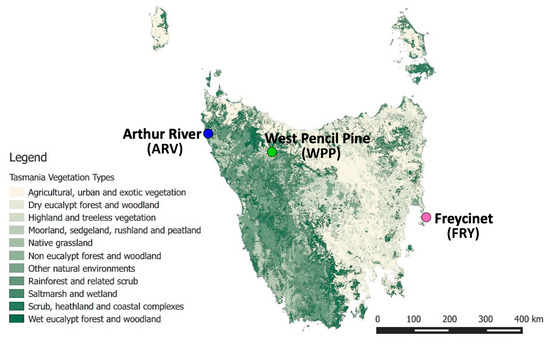