Fine-Tuning of GLI Activity through Arginine Methylation: Its Mechanisms and Function
Next Article in Special Issue

Rho GTPases in the Amygdala—A Switch for Fears?
Previous Article in Special Issue

Enhanced glycolysis is a hallmark of breast cancer. In cancer cells, the high glycolytic flux induces carbonyl stress, a damaging condition in which the increase of reactive carbonyl species makes DNA, proteins, and lipids more susceptible to glycation. Together with glucose, methylglyoxal (MGO), a byproduct of glycolysis, is considered the main glycating agent. MGO is highly diffusible, enters the nucleus, and can react with easily accessible lysine- and arginine-rich tails of histones. Glycation adducts on histones undergo oxidization and further rearrange to form stable species known as advanced glycation end-products (AGEs). This modification alters nucleosomes stability and chromatin architecture deconstructing the histone code. Formation of AGEs has been associated with cancer, diabetes, and several age-related diseases. Recently, DJ-1, a cancer-associated protein that protects cells from oxidative stress, has been described as a deglycase enzyme. Although its role in cell survival results still controversial, in several human tumors, its expression, localization, oxidation, and phosphorylation were found altered. This work aimed to explore the molecular mechanism that triggers the peculiar cellular compartmentalization and the specific post-translational modifications (PTM) that, occurring in breast cancer cells, influences the DJ-1 dual role. Using a proteomic approach, we identified on DJ-1 a novel threonine phosphorylation (T125) that was found, by the in-silico tool scansite 4, as part of a putative Akt consensus. Notably, this threonine is in addition to histidine 126, a key residue involved in the formation of catalytic triade (glu18-Cys106-His126) inside the glioxalase active site of DJ. Interestingly, we found that pharmacological modulation of Akt pathway induces a functional tuning of DJ-1 proteoforms, as well as their shuttle from cytosol to nucleus, pointing out that pathway as critical in the development of DJ-1 pro-tumorigenic abilities. Deglycase activity of DJ-1 on histones proteins, investigated by coupling 2D tau gel with LC-MS/MS and 2D-TAU (Triton-Acid-Urea)-Western blot, was found correlated with its phosphorylation status that, in turn, depends from Akt activation. In normal conditions, DJ-1 acts as a redox-sensitive chaperone and as an oxidative stress sensor. In cancer cells, glycolytic rewiring, inducing increased reactive oxygen species (ROS) levels, enhances AGEs products. Alongside, the moderate increase of ROS enhances Akt signaling that induces DJ-1-phosphorylation. When phosphorylated DJ-1 increases its glyoxalase activity, the level of AGEs on histones decreases. Therefore, phospho-DJ-1 prevents glycation-induced histones misregulation and its Akt-related hyperactivity represents a way to preserve the epigenome landscape sustaining proliferation of cancer cells. Together, these results shed light on an interesting mechanism that cancer cells might execute to escape the metabolic induced epigenetic misregulation that otherwise could impair their malignant proliferative potential. View Full-Text
Keywords: metabolic rewiring; DJ-1; AGEs; Akt; breast cancer; histones; 2D TAU gel; glycation metabolic rewiring; DJ-1; AGEs; Akt; breast cancer; histones; 2D TAU gel; glycation
►▼ Show Figures 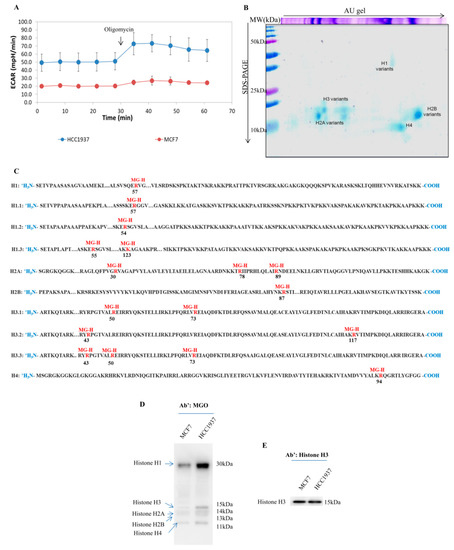