Characterisation of animal models of diabetic cardiomyopathy may help unravel new molecular targets for therapy. Long-living individuals are protected from the adverse influence of diabetes on the heart, and the transfer of a longevity-associated variant (LAV) of the human BPIFB4 gene protects cardiac function in the db/db mouse model. This study aimed to determine the effect of LAV-BPIFB4 therapy on the metabolic phenotype (ultra-high-performance liquid chromatography-mass spectrometry, UHPLC-MS) and cardiac transcriptome (next-generation RNAseq) in db/db mice. UHPLC-MS showed that 493 cardiac metabolites were differentially modulated in diabetic compared with non-diabetic mice, mainly related to lipid metabolism. Moreover, only 3 out of 63 metabolites influenced by LAV-BPIFB4 therapy in diabetic hearts showed a reversion from the diabetic towards the non-diabetic phenotype. RNAseq showed 60 genes were differentially expressed in hearts of diabetic and non-diabetic mice. The contrast between LAV-BPIFB4- and vehicle-treated diabetic hearts revealed eight genes differentially expressed, mainly associated with mitochondrial and metabolic function. Bioinformatic analysis indicated that LAV-BPIFB4 re-programmed the heart transcriptome and metabolome rather than reverting it to a non-diabetic phenotype. Beside illustrating global metabolic and expressional changes in diabetic heart, our findings pinpoint subtle changes in mitochondrial-related proteins and lipid metabolism that could contribute to LAV-BPIFB4-induced cardio-protection in a murine model of type-2 diabetes. View Full-Text
Keywords: cardiomyopathy; type-2 diabetes; longevity; gene therapy; BPIFB4 cardiomyopathy; type-2 diabetes; longevity; gene therapy; BPIFB4
►▼ Show Figures 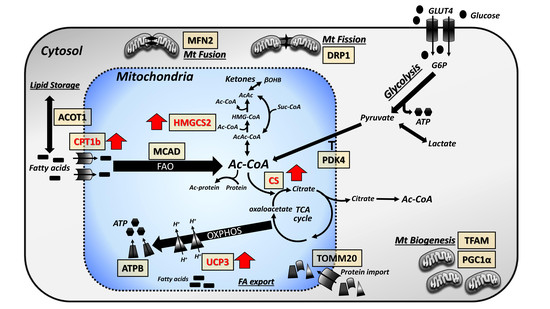