Differences in the Response to DNA Double-Strand Breaks between Rod Photoreceptors of Rodents, Pigs, and Humans
Previous Article in Journal

Cells were exposed to an equal physical dose of 3 Gy for γH2A.X assay or 1, 2, 4, 6 and 8 Gy for long-term clonogenic survival assays, independent of different beams and irradiators used. We present the model of irradiation in Figure 1A and show the distribution of relative dose in percent.

Proton irradiation was performed on a Proteus Plus with a 230 MeV cyclotron (IBA International, Louvain-La-Neuve, Belgium). The plates with cell monolayers covered with 2 ml of culture medium for 12-well and 6-well plates were placed on a treatment table and irradiated in pencil beam mode in a defined source axis distance in the isocenter. Cells were exposed to either mid SOBP or EP proton irradiation. A narrow SOBP was necessary to account for uncertainties in range and scattering as well as exact cell positions while maintaining the SOBP region. The maximum energy of 110 MeV (range approx. 9 cm in water) and the lowest energy of 100 MeV (range approx. 7.6 cm in water) of the SOBP (in total six layers) must therefore be transmitted through a range shifter (thickness 7.4 cm). The range shifter offers the possibility to reach the desired measuring depth. A 2 mm solid plate phantom was used as build up to position the cells in the EP region of the depth dose curve. SOBP was composed of 6 single Bragg peaks with following energies in MeV: 1: 109.9; 2: 107.6; 3: 105.1; 4: 103.1; 5: 100.9; 6: 100. To achieve the same dose for the EP proton region as for SOBP, the range shifter was not applied, and the time of irradiation was increased.
Irradiation fields were created and optimized by the clinical planning system and calibrated by measuring the dose with a 2D array detector MatriXX PT (IBA International, Louvain-La-Neuve, Belgium) at the same depth as the cells were placed during the irradiation.

Clonogenic cell survival was tested in response to ionizing radiation with doses between 1 and 8 Gy as previously described [54]. Exponentially grown cells were seeded in 6-well plates and were irradiated 24 h later. For determination of colony formation, cells were fixed after 7–10 days in 3.7% formaldehyde and 70% ethanol, and stained with 0.05% Coomassie blue. Colonies of at least 50 cells were counted. Survival data were calculated using the linear-quadratic model and the following equation:
S(D) = exp [− (αD + βD2)]
where S(D) – survival fraction probability at a given radiation dose (D), α – linear and β – quadratic parameter of cells’ radiosensitivity [55].
The linear (α) and quadratic (β) parameters were calculated for each survival curve form, stratified and fitted to the liner-quadratic model colony formation survival data. The dose D(S) to achieve a given survival level (S) was calculated using transformed Equation (1):
D(S) = − (α/2β) ± [0.25(α/β)2 − (ln(S)/β)]0.5
The RBE values were calculated as previously described using Equation (3):
RBE(S) = D(S) X-rays/D(S) particle
where RBE(S) – RBE at a given cell survival level (10%), D(S) X-rays – dose of X-ray photons and D(S) particle – dose of EP/SOBP protons required to achieved given cell survival (S) [23,56].

Exponentially growing cells cultured in 6-well plates were irradiated with 8 Gy photon or proton irradiation. Alkaline buffers were prepared according to [61]. Cells were collected at defined time points after irradiation (30 min, 4 h, 8 h, 24 h) by trypsinization. The cell suspension (100 μL) was mixed with 200 μL agarose (40 °C, 1% in ddH2O, low melting, Sigma-Aldrich, Deisenhofen, Germany) and pipetted onto an agarose-precoated slide. The agarose clot was covered with a cover slip, which was removed after solidification of the agarose and subsequently placed in alkaline lysis buffer (pH > 13.0) for 1 h. The slides were then placed in alkaline electrophoresis buffer (pH > 12.3) for 10 min to allow buffer exchange prior to electrophoresis for 1 h (0.75 V/cm electrode distance). Subsequently, the slides were transferred in ddH2O for 10 min and allowed to air-dry overnight at room temperature. For fluorescence microscopy, propidium iodide solution (50 μg/mL in ddH2O) was added onto the dried slide and sealed with a cover slip. The comets were imaged by the Axio Scanner Z.1 with 10× objective magnification and using the ZEN 2 Blue edition software (Carl Zeiss AG, Germany) and the tail length determined with ImageJ (1.51j8 available at https://imagej.nih.gov/ij/; U.S. National Institutes of Health, Bethesda, MD, USA) and the plugin OpenComet (OpenComet v1.3.1) [62].

3.3. Lig IV is Essential for the Repair of DNA Damage Induced in MEFs by Irradiation with X-ray Photons and SOBP Protons

3.4. Impairment of NHEJ or HRR shows a Different Impact on Sensitivity of Cancer Cells to Irradiation with X-ray Photons or Protons

This work was supported by a grant of the German Research Foundation DFG GRK1739/2 to V.J. and by a grant for ITN RADIATE from European Union’s Framework Programme for Research and Innovation Horizon 2020 (2014–2020) under Marie Skłodowska-Curie Grant Agreement No. 642623 to V.J. and M.P.; J.T.S. is supported by the German Cancer Consortium (DKTK) and the German Research Foundation (DFG) through grant SI1549/3-1 (Clinical Research Unit KFO337) and Collaborative Research Center SFB824 (project C4). 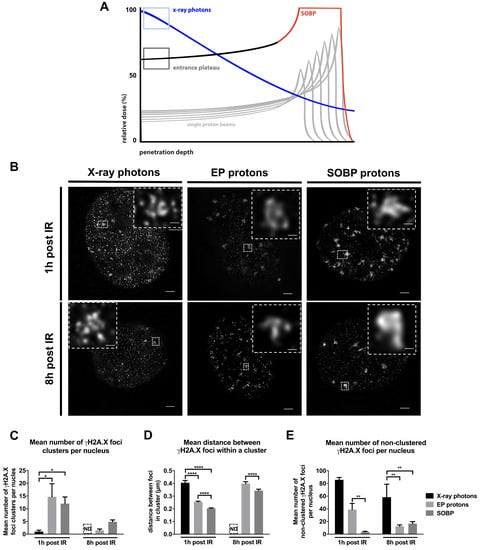 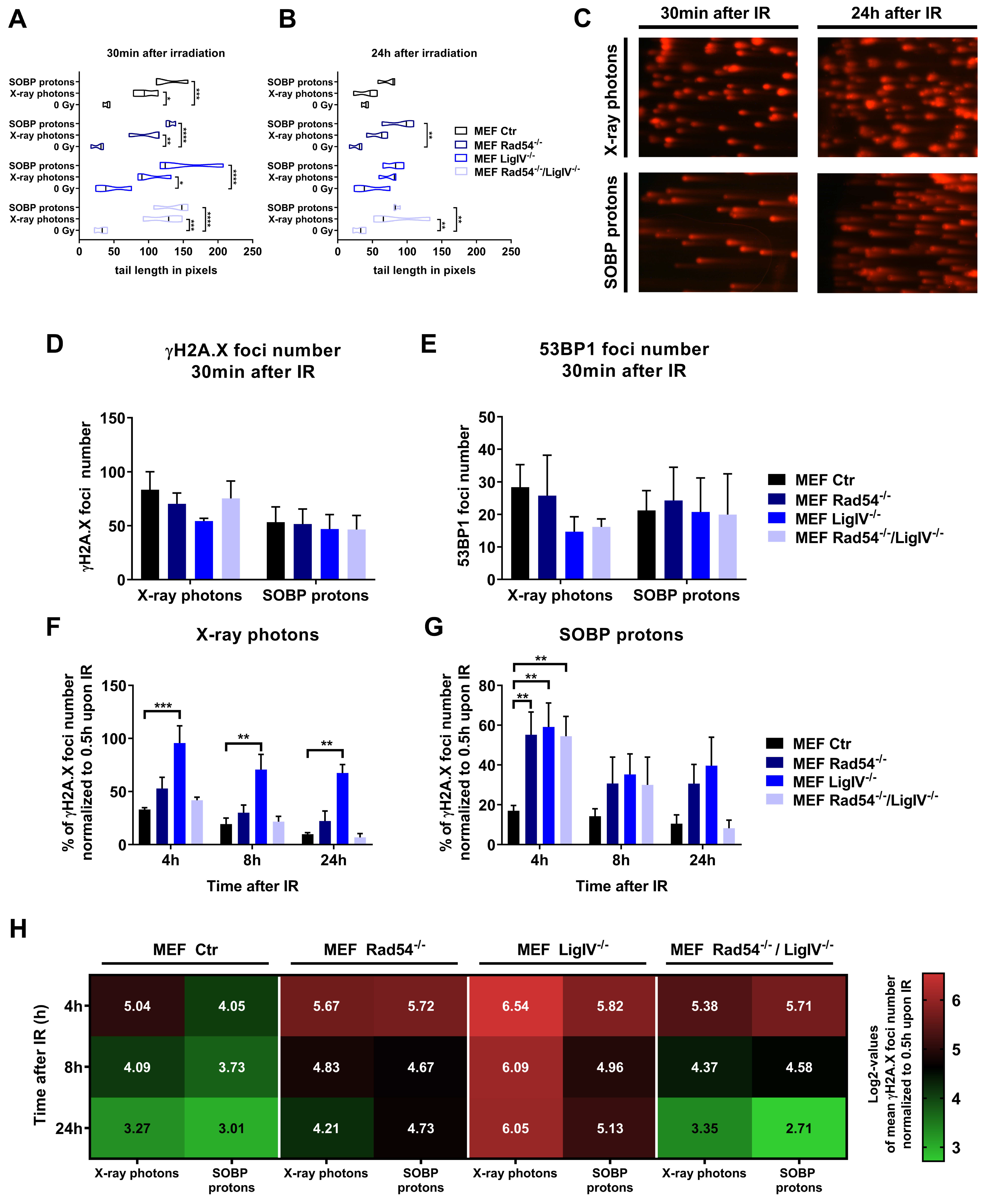