The cation channel subunit TRPC1 is strongly expressed in central neurons including neurons in the CA1 region of the hippocampus where it forms complexes with TRPC4 and TRPC5. To investigate the functional role of TRPC1 in these neurons and in channel function, we compared current responses to group I metabotropic glutamate receptor (mGluR I) activation and looked for major differences in dendritic morphology in neurons from TRPC1+/+ and TRPC1−/− mice. mGluR I stimulation resulted in the activation of a voltage-dependent nonselective cation current in both genotypes. Deletion of TRPC1 resulted in a modification of the shape of the current-voltage relationship, leading to an inward current increase. In current clamp recordings, the percentage of neurons that responded to depolarization in the presence of an mGluR I agonist with a plateau potential was increased in TRPC1−/− mice. There was also a small increase in the minor population of CA1 neurons that have more than one apical dendrite in TRPC1−/− mice. We conclude that TRPC1 has an inhibitory effect on receptor-operated nonselective cation channels in hippocampal CA1 neurons probably as a result of heterotetramer formation with other TRPC isoforms, and that TRPC1 deletion has only minor effects on dendritic morphology. View Full-Text
Keywords: TRPC channels; cation channels; TRPC channel regulation; molecular physiology; TRPC1; nonselective cation current; hippocampus; CA1 TRPC channels; cation channels; TRPC channel regulation; molecular physiology; TRPC1; nonselective cation current; hippocampus; CA1
►▼ Show Figures 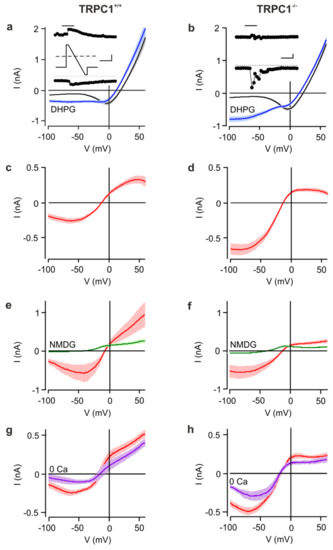