Flexible Players within the Sheaths: The Intrinsically Disordered Proteins of Myelin in Health and Disease
Previous Article in Journal

The Extracellular Matrix: An Accomplice in Gastric Cancer Development and Progression
Previous Article in Special Issue

Evaluation of myelin by magnetic resonance imaging (MRI) is a difficult challenge, but holds promise in demyelinating diseases, such as multiple sclerosis (MS). Although multiple techniques have been developed, no gold standard has been established. This study aims to evaluate the correlation between synthetic MRI myelin volume fraction (SyMRIMVF) and myelin fraction estimated by other techniques, i.e., magnetization transfer saturation (MTsat), T1-weighted images divided by T2-weighted images (T1w/T2w), and radial diffusivity (RD) in patients with MS. We also compared the sensitivities of these techniques for detecting MS-related myelin damage. SyMRIMVF, MTsat, T1w/T2w, and RD were averaged on plaque, periplaque white matter, and normal-appearing white matter (NAWM). Pairwise correlation was calculated using Spearman’s correlation analysis. For all segmented regions, strong correlations were found between SyMRIMVF and T1w/T2w (Rho = 0.89), MTsat (Rho = 0.82), or RD (Rho = −0.75). For each technique, the average estimated myelin differed significantly among regions, but the percentage change of NAWM from both periplaque white matter and plaque were highest in SyMRIMVF. SyMRIMVF might be suitable for myelin evaluation in MS patients, with relevant results as compared to other well-studied techniques. Moreover, it presented better sensitivity for the detection of the difference between plaque or periplaque white matter and NAWM.
Keywords: myelin; multiple sclerosis; synthetic magnetic resonance imaging myelin; multiple sclerosis; synthetic magnetic resonance imaging

Thirty-seven patients with relapsing-remitting MS were prospectively included in this study, from March 2017 to July 2018. These patients were diagnosed with MS according to the standard McDonald criteria [40]. Of these patients, 14 did not have any plaque or had only small (<5 mm maximal length) plaques on brain MRI and 2 had diffuse extensive WM abnormalities. Therefore, these 16 patients were excluded and the remaining 21 patients were included in the analysis. Disability was assessed using the Expanded Disability Status Scale (EDSS) score. The demographic and clinical data of the patients with MS are provided in Table 1. The institutional review board of Juntendo University Hospital approved this study on 18 March 2016 and written informed consent was obtained from all participants. The ethical approval number is 15-212.

2.3. Acquisition and Processing of SyMRI Data

MR relaxometry was performed with the QRAPMASTER (quantification of relaxation times and proton density by multi-echo acquisition of a saturation recovery using turbo spin-echo readout) pulse sequence, which is a multi-slice, multi-echo, and multi-saturation delay acquisition sequence. Two sets of echo times (TE) and 4 sets of delay times were used to generate 8 complex images in each section in order to quantify R1, R2, and PD. The TE were 22 and 99 ms, the delay times were 170, 620, 1970, and 4220 ms and the repetition time (TR) was 4250 ms. An in-plane resolution of 0.8 × 0.8 mm with a slice thickness/gap of 4.0/1.0 mm was used for 30 slices. The field-of-view (FOV) was set to 230 × 186 mm with a matrix size of 320 × 208. The acquisition time was 5 min and 8 s.
With the assumption that all the R1, R2, and PD values of MVF, excess parenchymal water volume fraction, cellular volume fraction, and free water volume fraction contribute to the effective R1, R2, and PD in each acquisition voxel; a model was produced to estimate partial volumes of these four compartments, as described by Warntjes et al. [7]. This was done by running Bloch equations and optimizing model parameters in a spatially normalized and averaged brain from a group of healthy controls. Damage to myelin, even in the NAWM of patients with MS [18], is supposed to cause deviation from the R1, R2, and PD in the healthy state, leading to a decrease in the calculated SyMRIMVF. Using this model, MVF maps were created from R1, R2, and PD maps via SyMRI software (version 8.04; SyntheticMR, Linköping, Sweden).
Even though other myelin imaging techniques require scaling factors for estimating MVF from the measured macromolecular pool or myelin water, this procedure was not necessary because SyMRIMVF directly estimates the volume fraction of myelin in each voxel [7].

Synthetic T1w and T2w images were created using post-processing TR of 500 ms and TE of 10 ms and TR of 4500 ms and TE of 100 ms, respectively, on SyMRI software based on R1, R2, and PD maps. To reduce the effect of intensity scaling, we used a calibration algorithm based on 2 anatomical masks (eye and temporal muscle), as proposed by Ganzetti et al. [41]. We recorded the modes as reference values for the eyes as follows: 28.2 for T1w images and 99.9 for T2w images. For the temporal muscle, these values were 58.6 for T1w images and 21.1 for T2w images. After calibrating the T1w and T2w images, their ratio was calculated to produce T1w/T2w ratio images. The T1w/T2w ratio was further linearly calibrated, as reported in a previous study [13], to be comparable to SyMRIMVF.

2.5. Acquisition and Processing of MTsat

2.6. Acquisition and Processing of Radial Diffusivity

Synthetic T2w images and maps of SyMRIMVF, MTsat, RD, and T1w/T2w (Figure 1) were analyzed by using ITK-SNAP software (3.8.0-beta version) by a radiologist (L.S.) with 3 years of experience. Plaques were defined as a WM area of more than 5 mm in diameter in the supratentorial area, with abnormally high intensity on T2w images. Plaques were semi-automatically segmented on synthetic T2w images using an adaptive brush tool for automatic and objective adjustment to lesion boundaries, choosing an adaptive algorithm with high granularity and low smoothness to undersegment plaques slightly in order to mitigate possible misregistration and the partial volume effect. Periplaque regions were manually segmented with a small round-shaped brush (approximately ⅕th of plaque diameter). Periplaque was defined as a visually normal-appearing WM (NAWM) area on a synthetic T2w image closest to a plaque [19,43,44]. Around each plaque, up to 6 areas were added in order to encircle the plaque and, together, these were considered as a periplaque region-of-interest (ROI). NAWM was manually segmented with a round-shaped brush on the WM contralateral to each plaque while avoiding other plaques. All the ROIs placed on synthetic T2w images were copied and pasted onto the SyMRIMVF, T1w/T2w, MTsat, and RD maps.

For acquired myelin-sensitive metrics, normality was tested with the Shapiro–Wilk test. Because not all data were normally distributed, we used the Steel–Dwass nonparametric test for multiple comparisons to compare ROI volumes and the values of SyMRIMVF, T1w/T2w, MTsat, and RD among plaque, periplaque, and NAWM tissue. The percentage changes in plaque or periplaque relative to NAWM were also calculated and compared among different metrics using the Steel–Dwass test. The signs of negative percentage changes were inverted before comparison.
Spearman’s rank order correlation analysis was used to investigate the correlation among myelin-sensitive metrics for plaque, periplaque, NAWM, and all regions. The signs of negative coefficients were inverted for further analysis and classification. Correlation coefficients across metrics were compared in plaque, periplaque, NAWM, and overall regions using a percentile bootstrap method, as described by Wilcox [45,46]. EDSS and disease duration were also correlated with myelin-sensitive metrics in the plaque, periplaque, and NAWM regions, averaged in each patient via Spearman’s rank order correlation analysis. Then, p-values for correlation coefficients and their comparisons were controlled for the false discovery rate [47]. Spearman’s ρ correlation coefficients were classified as follows: 0–0.30, very weak; 0.30–0.50, weak; 0.50–0.70, moderate; 0.70–0.90, strong; and 0.90–1.00, very strong. A 2-sided p-value <.05 was considered significant. Shapiro–Wilk and Steel–Dwass tests were performed with the software package R, version 3.3.3. Calculation of correlation coefficients and comparisons of these were performed on Matlab (release R2015b, MathWorks, Natick, Massachusetts, United States).

SyMRIMVF might be suitable for myelin evaluation of patients with MS, with results comparable to those of other well-studied myelin evaluation techniques (MTsat, T1w/T2w, and RD). Moreover, it presented better sensitivity for detecting the difference between plaque or periplaque regions and NAWM, which warrants further investigation for SyMRIMVF to be useful for diagnosis and prognosis evaluation. Subregional analysis demonstrated a weaker but significant correlation in myelin estimation, especially in NAWM, but NAWM SyMRIMVF was significantly associated with disease duration. SyMRIMVF could therefore yield additional complementary information about microstructural tissue damage in patients with MS.

The following are available online at https://www.mdpi.com/2073-4409/9/2/393/s1, Table S1: p values for comparisons of Spearman’s rho correlation coefficients across SyMRIMVF, MTsat, T1w/T2w and RD. These p values are corrected for false discovery rate.

We are grateful for the cooperation of the Japan Quantitative Imaging Biomarkers Alliance (J-QIBA) and Radiological Society of North America QIBA (RSNA-QIBA). 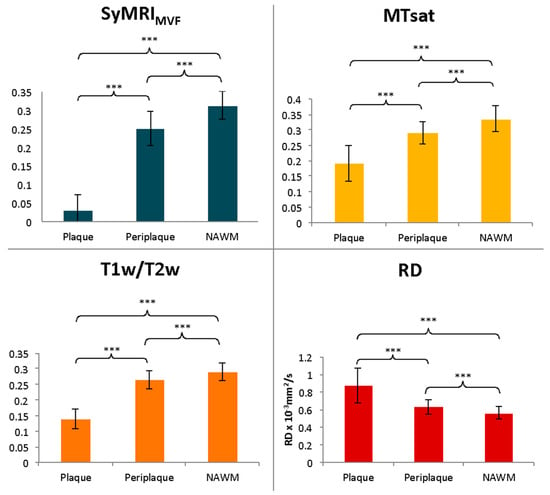 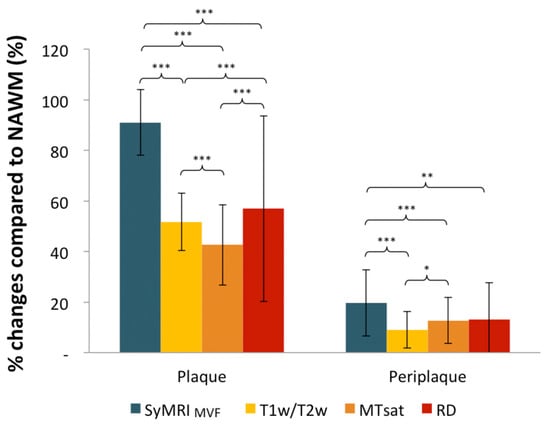 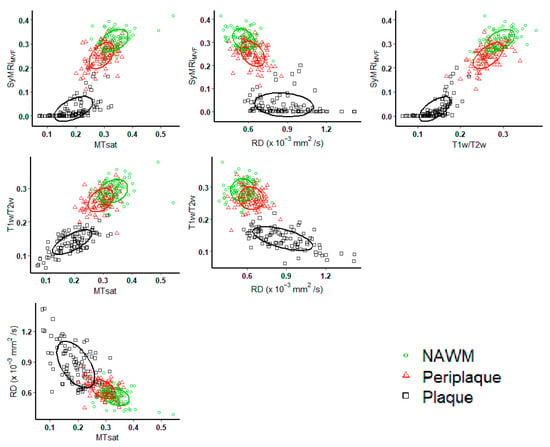