Interaction of the Anti-Proliferative GPER Inverse Agonist ERα17p with the Breast Cancer Cell Plasma Membrane: From Biophysics to Biology
Previous Article in Journal

Controversy in the Use of CD38 Antibody for Treatment of Myeloma: Is High CD38 Expression Good or Bad?

Some species of clover are reported to have beneficial effects in human diseases. However, little is known about the activity of the forage plant Trifolium repens, or white clover, which has been recently found to exert a hepatoprotective action. Scientific interest is increasingly focused on identifying new drugs, especially natural products and their derivatives, to treat human diseases including cancer. We analyzed the anticancer effects of T. repens in several cancer cell lines. The phytochemical components of T. repens were first extracted in a methanol solution and then separated into four fractions by ultra-high-performance liquid chromatography. The effects of the total extract and each fraction on cancer cell proliferation were analyzed by MTT assay and Western blotting. T. repens and, more robustly, its isoflavonoid-rich fraction showed high cytotoxic effects in chronic myelogenous leukemia (CML) K562 cells, with IC50 values of 1.67 and 0.092 mg/mL, respectively. The block of cell growth was associated with a total inhibition of BCR-ABL/STAT5 and activation of the p38 signaling pathways. In contrast, these strongly cytotoxic effects did not occur in normal cells. Our findings suggest that the development of novel compounds derived from phytochemical molecules contained in Trifolium might lead to the identification of new therapeutic agents active against CML. View Full-Text
Keywords: Trifolium repens; isoflavonoids; polyphenols; cancer; chronic myelogenous leukemia; K562 cells; BCR-ABL/STAT5 Trifolium repens; isoflavonoids; polyphenols; cancer; chronic myelogenous leukemia; K562 cells; BCR-ABL/STAT5
►▼ Show Figures 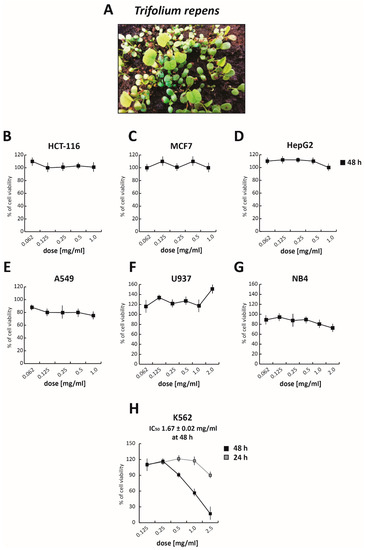