Granulins (GRN) are secreted factors that promote neuronal survival and regulate inflammation in various pathological conditions. However, their roles in physiological conditions in the brain remain poorly understood. To address this knowledge gap, we analysed the telencephalon in Grn-deficient zebrafish and identified morphological and transcriptional changes in microglial cells, indicative of a pro-inflammatory phenotype in the absence of any insult. Unexpectedly, activated mutant microglia shared part of their transcriptional signature with aged human microglia. Furthermore, transcriptome profiles of the entire telencephali isolated from young Grn-deficient animals showed remarkable similarities with the profiles of the telencephali isolated from aged wildtype animals. Additionally, 50% of differentially regulated genes during aging were regulated in the telencephalon of young Grn-deficient animals compared to their wildtype littermates. Importantly, the telencephalon transcriptome in young Grn-deficent animals changed only mildly with aging, further suggesting premature aging of Grn-deficient brain. Indeed, Grn loss led to decreased neurogenesis and oligodendrogenesis, and to shortening of telomeres at young ages, to an extent comparable to that observed during aging. Altogether, our data demonstrate a role of Grn in regulating aging kinetics in the zebrafish telencephalon, thus providing a valuable tool for the development of new therapeutic approaches to treat age-associated pathologies. View Full-Text
Keywords: neurogenesis; microglia; granulin; aging neurogenesis; microglia; granulin; aging
►▼ Show Figures 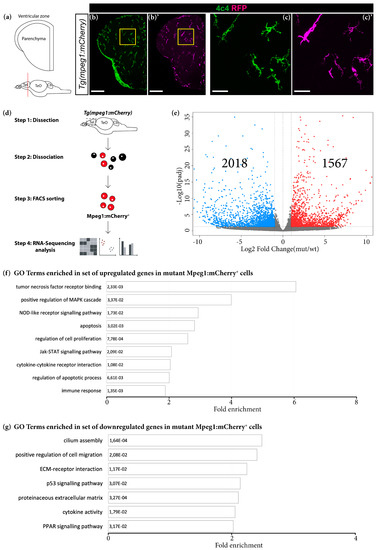