Alternative splicing is a combinatorial mechanism by which exons are joined to produce multiple mRNA variants, thus expanding the coding potential and plasticity of eukaryotic genomes. Defects in alternative splicing regulation are associated with several human diseases, including cancer. Ewing sarcoma is an aggressive tumor of bone and soft tissue, mainly affecting adolescents and young adults. DHX9 is a key player in Ewing sarcoma malignancy, and its expression correlates with worse prognosis in patients. In this study, by screening a library of siRNAs, we have identified splicing factors that regulate the alternative inclusion of a poison exon in DHX9 mRNA, leading to its downregulation. In particular, we found that hnRNPM and SRSF3 bind in vivo to this poison exon and suppress its inclusion. Notably, DHX9 expression correlates with that of SRSF3 and hnRNPM in Ewing sarcoma patients. Furthermore, downregulation of SRSF3 or hnRNPM inhibited DHX9 expression and Ewing sarcoma cell proliferation, while sensitizing cells to chemotherapeutic treatment. Hence, our study suggests that inhibition of hnRNPM and SRSF3 expression or activity could be exploited as a therapeutic tool to enhance the efficacy of chemotherapy in Ewing sarcoma. View Full-Text
Keywords: DHX9; alternative splicing; Ewing sarcoma; chemoresistance DHX9; alternative splicing; Ewing sarcoma; chemoresistance
►▼ Show Figures 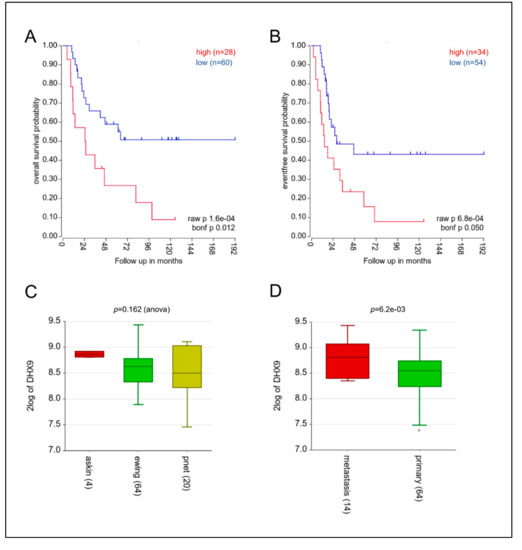