Visfatin/NAMPT (nicotinamide phosphoribosyltransferase) is an adipocytokine with several intriguing properties. It was first identified as pre-B-cell colony-enhancing factor but turned out to possess enzymatic functions in nicotinamide adenine dinucleotide biosynthesis, with ubiquitous expression in skeletal muscles, liver, cardiomyocytes, and brain cells. Visfatin exists in an intracellular (iNAMPT) and extracellular (eNAMPT) form. Intracellularly, visfatin/iNAMPT plays a regulatory role in NAD+ biosynthesis and thereby affects many NAD-dependent proteins such as sirtuins, PARPs, MARTs and CD38/157. Extracellularly, visfatin is associated with many hormone-like signaling pathways and activates some intracellular signaling cascades. Importantly, eNAMPT has been associated with several metabolic disorders including obesity and type 1 and 2 diabetes. In this review, a brief overview about visfatin is presented with special emphasis on its relevance to metabolic diseases. Visfatin/NAMPT appears to be a unique molecule with clinical significance with a prospective promising diagnostic, prognostic, and therapeutic applications in many cardiovasculo-metabolic disorders. View Full-Text
Keywords: visfatin/NAMPT; metabolic disorders; NAD+; sirtuins; PARPs/MARTs visfatin/NAMPT; metabolic disorders; NAD+; sirtuins; PARPs/MARTs
►▼ Show Figures 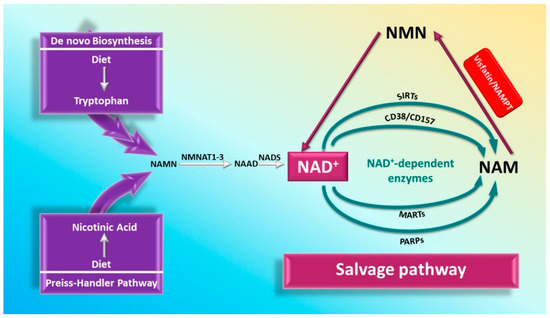