Expression of FGF8, FGF18, and FGFR4 in Gastroesophageal Adenocarcinomas

Even though distinctive advances in the field of esophageal cancer therapy have occurred over the last few years, patients’ survival rates remain poor. FGF8, FGF18, and FGFR4 have been identified as promising biomarkers in a number of cancers; however no data exist on expression of FGF8, FGF18, and FGFR4 in adenocarcinomas of the esophago-gastric junction (AEG). A preliminary analysis of the Cancer Genome Atlas (TCGA) database on FGF8, FGF18, and FGFR4 mRNA expression data of patients with AEG was performed. Furthermore, protein levels of FGF8, FGF18, and FGFR4 in diagnostic biopsies and post-operative specimens in neoadjuvantly treated and primarily resected patients using immunohistochemistry were investigated. A total of 242 patients was analyzed in this study: 87 patients were investigated in the TCGA data set analysis and 155 patients in the analysis of protein expression using immunohistochemistry. High protein levels of FGF8, FGF18, and FGFR4 were detected in 94 (60.7%), 49 (31.6%) and 84 (54.2%) patients, respectively. Multivariable Cox proportional hazard regression models revealed that high expression of FGF8 was an independent prognostic factor for diminished overall survival for all patients and for neoadjuvantly treated patients. By contrast, FGF18 overexpression was significantly associated with longer survival rates in neoadjuvantly treated patients. In addition, FGF8 protein level correlated with Mandard regression due to neoadjuvant therapy, indicating potential as a predictive marker. In summary, FGF8 and FGF18 are promising candidates for prognostic factors in adenocarcinomas of the esophago-gastric junction and new potential targets for new anti-cancer therapies. View Full-Text
Keywords: FGF8; FGF18; FGFR4; adenocarcinoma of the esophagogastric junction; neoadjuvant therapy FGF8; FGF18; FGFR4; adenocarcinoma of the esophagogastric junction; neoadjuvant therapy
►▼ Show Figures 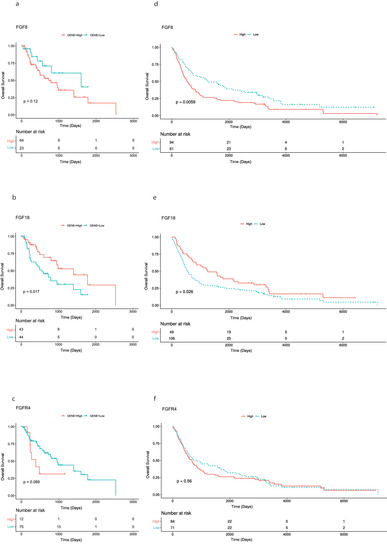