Circulating microRNAs offer attractive potential as epigenetic disease biomarkers by virtue of their biological stability and ready accessibility in liquid biopsies. Numerous clinical cohort studies have revealed unique microRNA profiles in different disease settings, suggesting utility as markers with diagnostic and prognostic applications. Given the complex network of microRNA functions in modulating gene expression and post-transcriptional modifications, the circulating microRNA landscape in disease may reflect pathophysiological status, providing valuable information for delineating distinct subtypes and/or stages of complex diseases. Heart failure (HF) is an increasingly significant global health challenge, imposing major economic liability and health care burden due to high hospitalization, morbidity, and mortality rates. Although HF is defined as a syndrome characterized by symptoms and findings on physical examination, it may be further differentiated based on left ventricular ejection fraction (LVEF) and categorized as HF with reduced ejection fraction (HFrEF) and HF with preserved ejection fraction (HFpEF). The presenting clinical syndromes in HFpEF and HFrEF are similar but mortality differs, being somewhat lower in HFpEF than in HFrEF. However, while HFrEF is responsive to an array of therapies, none has been shown to improve survival in HFpEF. Herein, we review recent HF cohort studies focusing on the distinct microRNA profiles associated with HF subtypes to reveal new insights to underlying mechanisms and explore the possibility of exploiting these differences for diagnostic/prognostic applications.
Keywords: heart failure; microRNA; HFrEF; HFpEF heart failure; microRNA; HFrEF; HFpEF

Heart failure (HF) is a complex clinical syndrome arising from deficient cardiac output that is unable to meet the metabolic needs of the organs and tissues in the body. HF evolves from systolic and/or diastolic contractile dysfunction caused by progressive structural and functional alterations of the heart [1]. Multiple risk factors are strongly associated with the prevalence and incidence of HF, including age, hypertension, obesity, and diabetes, as well as prior cardiovascular conditions such as atrial fibrillation and coronary artery disease especially when complicated by myocardial infarction [2]. HF may be acute or chronic with many patients experiencing recurrent episodes of acute decompensated HF superimposed on a background of chronic HF, wherein the latter comprises the majority of the HF population [1]. Despite substantial therapeutic advances, morbidity, mortality, and hospitalization rates in HF remain high. HF survival has not improved from a decade ago with mortality of approximately 20% and 53% at one and five years from diagnosis, respectively [3]. It is estimated that 17–45% of hospitalized HF patients die within a year of admission and no more than half will survive beyond five years [1,4]. With an aging population worldwide, the incidence and prevalence of HF is rising, compounded by known age-related comorbidities such as type 2 diabetes mellitus and renal impairment, as well as myocardial infarction and hypertension [5,6,7]. The enormous and growing challenge of HF as a significant global health problem requires urgent attention to accelerate disease characterization, understand HF predictors, and to open windows of opportunities for diagnosis/prognosis, prevention, and treatment.

The overall prevalence of HF is about 1–2% worldwide with an estimated 37.7 million people affected globally [4,8]. In the United States and European Union, the prevalence of HF varies from 1% to 14% in various cohort studies involving different age groups [2]. Based on data collected between 2011–2014 in the United States, the prevalence of HF in those over 20 years of age is about 6.5 million (2.4%) with 960,000 new cases reported annually [1]. In the United Kingdom, the prevalence of HF is 1.5–1.6% based on a longitudinal study between 2002–2014 [2]. Notably, further analysis revealed a rise in HF incidence by 23% from 2002 to 2014 in the United Kingdom (from 750,127 cases in 2002 to 920,616 cases in 2014) [2]. The trend is similar in Asia where the overall prevalence of HF is around 1–2% but distributed variably (between 0.3 to 6.7%) across different countries [9]. Asian HF patients are younger than those of Caucasian ethnicity. The contributory factors for this difference remain elusive [9]. Asia has a rapidly aging population of about 4.5 billion people (approximately 60% of the world’s population) carrying a high burden of cardiovascular risk. This portends a burgeoning public health challenge in the region mandating urgent research to understand and characterize geographical, social, ethnic, and phenotypic differences in Asian HF.

3. The Challenges of HFrEF and HFpEF

4. MicroRNAs, the Small Nucleotides that May Play Big Roles in HF Research

MicroRNAs comprise a cluster of noncoding RNA species that are known to play important roles in modulating the expression of most protein coding genes at the post-transcriptional level [42]. MicroRNAs are first transcribed in the nucleus by RNA polymerase II, subsequently edited and exported to the cytoplasm for further processing into mature microRNA, and finally assembled into argonaut-containing RNA-induced silencing complexes (RISC). In the cytoplasm, by Watson–Crick base pairing, the seed region of microRNA guides the RISC to the 3’ untranslated region (3’UTR) of target gene transcripts and subsequent silencing of gene expression by facilitating the degradation of messenger RNA (mRNA) and/or suppressing the translational machinery [43]. In addition to autonomously regulating gene expression, a growing body of evidence further supports the role of microRNAs in exerting paracrine effects via extracellular vesicles or exosomes and subsequently modulating the biological functions of a targeted organ [44,45,46]. Given the roles of microRNAs in fine-tuning gene expression in cells, and that the circulating microRNA landscape is contingent on active export from cells and/or passive release from damaged or necrotic cells, it is conceivable that the composition of circulating microRNAs may reflect physiological status and may contain valuable pathobiological information of different disease states. MicroRNAs, particularly circulating microRNAs, have been found to be highly stable with long half-lives under a controlled environment [47,48]. Accumulating evidence from studies across broad biomedical disciplines suggests the involvement of microRNAs, and their potential applications as diagnostic as well as prognostic biomarkers in various human diseases including cancer [49,50,51], neurodegenerative diseases [52,53,54,55], fertility disorders [56,57], and metabolic disorders [58,59]. For several years, our research effort has been devoted to discovering potential applications of microRNAs in disease diagnosis, as well as elucidating the role of dysregulated microRNAs in cardiovascular pathogenesis [60,61,62,63,64]. The involvement of specific microRNAs in different cardiovascular pathological pathways has been examined using functional analyses and different disease models [65], and the dysregulation of circulating microRNAs offers candidate biomarkers for heart failure [43].

5. MicroRNA Profiling in HFrEF and HFpEF

The discovery of microRNAs and their roles in post-transcriptional modification have led to further advances in understanding the complexity of gene regulation. However, translating findings of distinct circulating microRNA compositions and their pathophysiological implications in different disease states to decipher underlying mechanisms with a view towards therapeutic exploitation remains challenging.
MicroRNA-3’UTR interactions do not require perfect Watson–Crick pairing and this significantly increases the functional flexibility of microRNA. It is now known that one microRNA can have multiple 3’UTR targets, and one 3’UTR can be recognized by more than one microRNA so that biological homeostasis could be tightly controlled in the normal state while dynamic biochemical responses could also be triggered upon stimulation. Although it has been established that microRNAs play important roles in post-transcriptional modification, scientists have yet to fully understand the operating rhythm of microRNAs. The traditional approach of deciphering the regulatory effect of one microRNA on one gene is manifestly inadequate in bringing together the influence of the microRNA landscape on gene expression regulatory networks. Dysregulated microRNAs can be viewed as functional clusters that variously contribute to HF pathogenesis. This concept was supported by our previous study where data from microRNA/3’UTR binding and gain-of-function assays demonstrated putative regulatory effects of HF-related microRNAs upon key molecules involved in neurohormonal signaling [64].
Given the potential application of signature microRNAs in HF diagnosis, further independent verification of our findings by other reputable investigators is needed. Furthermore, the diagnostic performance of microRNAs may require further refinement according to comorbidities and clinical background. Further studies to clarify the association between HF-related microRNAs and pathogenesis will be essential to translate these epigenetic alterations into therapeutic applications. It is conceivable that linear algorithms will not be adequate to describe the interaction networks between transactivation and post-transcriptional regulation of microRNAs with their target genes. Hence, large scale international multi-disciplinary collaborative research integrating expertise in biomedicine, clinical practice, bioinformatics, artificial intelligence, and machine learning will be pivotal to advancing progress in HF research. 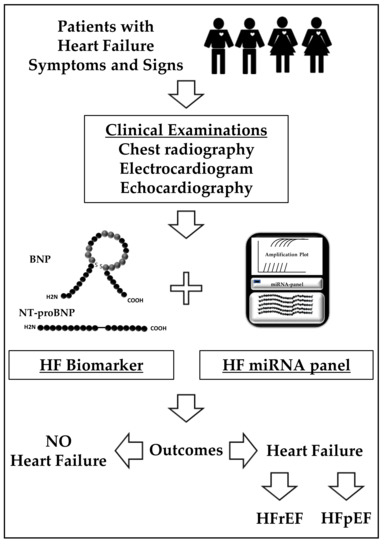 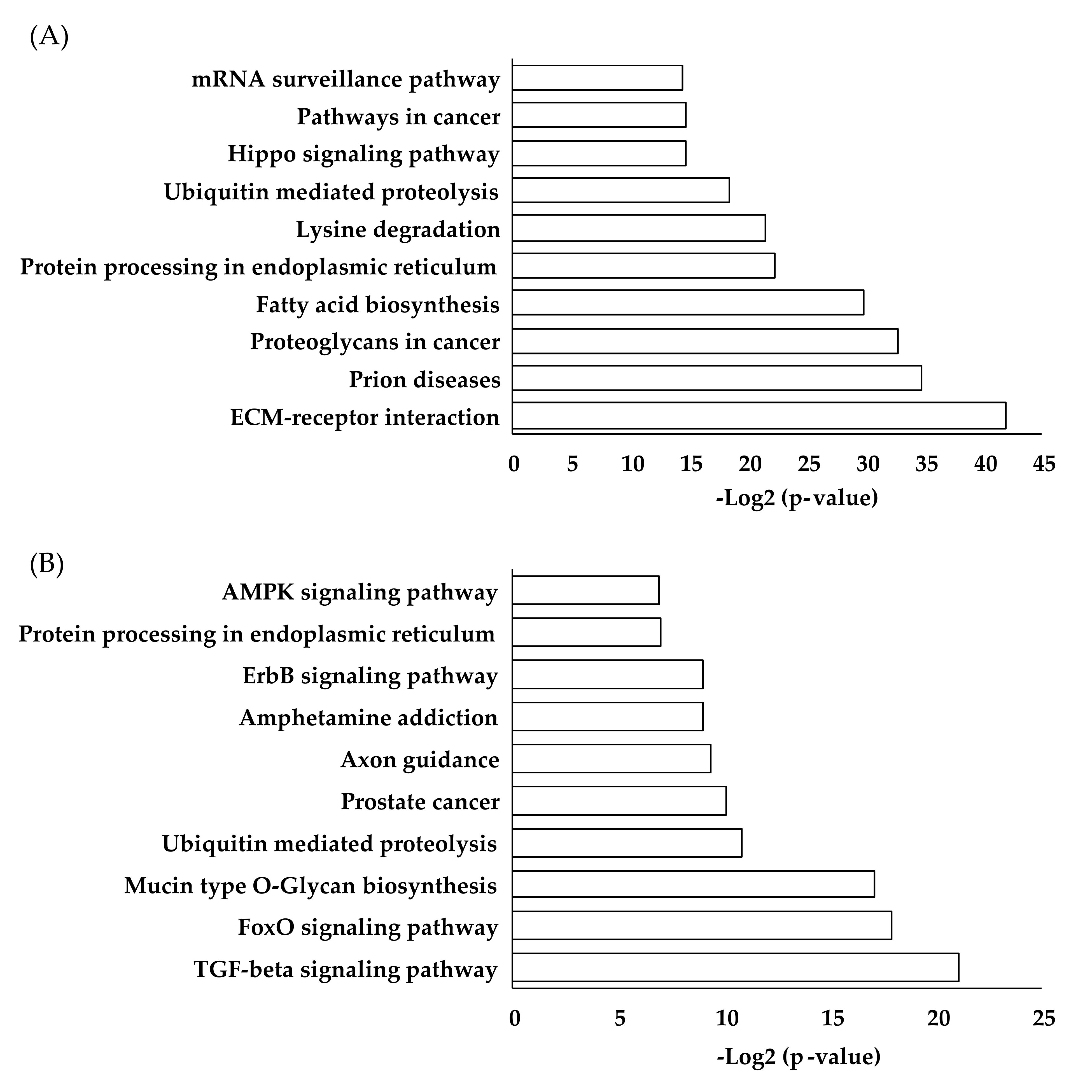