Mast cells are well known for their detrimental effects in allergies and asthma, and Wnt signaling has recently been implicated in asthma and other airway diseases. However, it is not known if or how Wnts affect human mast cells. Since Wnt expression is elevated in individuals with asthma and is linked to a Th2 profile, we hypothesized that mast cells could be affected by Wnts in the context of asthma. We therefore sought to investigate the role of Wnt signaling in human mast cell development and activation. We first examined the expression of the 10 main Wnt receptors, Frizzled 1–10 (FZD1–10), and found expression of several FZDs in human mast cells. Treatment with purified recombinant Wnt-3a or Wnt-5a did not affect the proliferation or maturation of CD34+ progenitors into mast cells, as indicated by cellular expression of CD117 and FcεRI, activation by FcεRI crosslinking, and histamine and tryptase release. Furthermore, Wnt treatment did not change the phenotype from MCT to MCTC, since MrgX2 expression, compound 48/80-mediated activation, and carboxypeptidase A3 content were not affected. However, Wnt-3a activated WNT/β-catenin signaling in mature human mast cells, as revealed by stabilization of β-catenin, upregulation of IL-8 and CCL8 mRNA expression, and release of IL-8 protein. Thus, our data suggest that Wnt-3a activation of mast cells could contribute to the recruitment of immune cells in conditions associated with increased Wnt-3a expression, such as asthma. View Full-Text
Keywords: mast cells; Wnt signaling; Wnt-3a; Frizzled; IL-8; CCL8; asthma mast cells; Wnt signaling; Wnt-3a; Frizzled; IL-8; CCL8; asthma
►▼ Show Figures 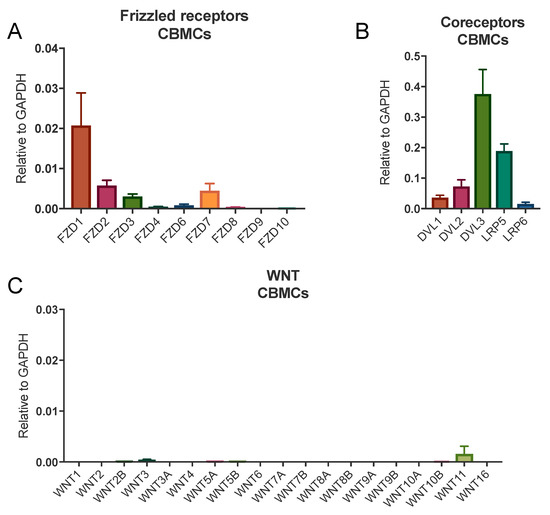