Androgens and Androgen Receptor Actions on Bone Health and Disease: From Androgen Deficiency to Androgen Therapy
Next Article in Special Issue

Autophagic- and Lysosomal-Related Biomarkers for Parkinson’s Disease: Lights and Shadows

Parkinson’s disease (PD) is a neurodegenerative disorder that currently affects 1% of the population over the age of 60 years, for which no disease-modifying treatments exist. This lack of effective treatments is related to the advanced stage of neurodegeneration existing at the time of diagnosis. Thus, the identification of early stage biomarkers is crucial. Biomarker discovery is often guided by the underlying molecular mechanisms leading to the pathology. One of the central pathways deregulated during PD, supported both by genetic and functional studies, is the autophagy-lysosomal pathway. Hence, this review presents different studies on the expression and activity of autophagic and lysosomal proteins, and their functional consequences, performed in peripheral human biospecimens. Although most biomarkers are inconsistent between studies, some of them, namely HSC70 levels in sporadic PD patients, and cathepsin D levels and glucocerebrosidase activity in PD patients carrying GBA mutations, seem to be consistent. Hence, evidence exists that the impairment of the autophagy-lysosomal pathway underlying PD pathophysiology can be detected in peripheral biosamples and further tested as potential biomarkers. However, longitudinal, stratified, and standardized analyses are needed to confirm their clinical validity and utility. View Full-Text
Keywords: Parkinson’s disease; biomarker; autophagy; lysosome; glucocerebrosidase; alpha synuclein Parkinson’s disease; biomarker; autophagy; lysosome; glucocerebrosidase; alpha synuclein
►▼ Show Figures 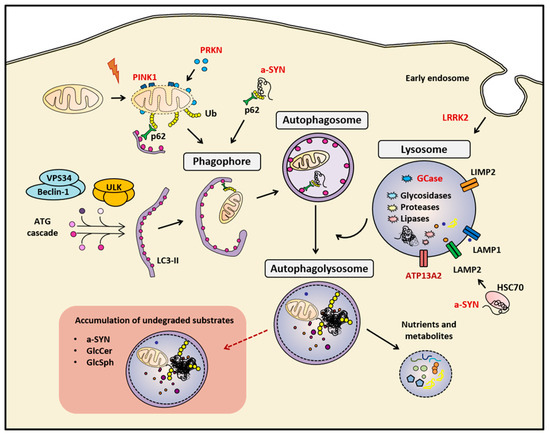