:
Adverse outcomes following virus-associated disease in patients receiving allogeneic haematopoietic stem cell transplantation (HSCT) have encouraged strategies to control viral reactivation in immunosuppressed patients. However, despite timely treatment with antiviral medication, some viral infections remain refractory to treatment, which hampers outcomes after HSCT, and are responsible for a high proportion of transplant-related morbidity and mortality. Adoptive transfer of donor-derived lymphocytes aims to improve cellular immunity and to prevent or treat viral diseases after HSCT. Early reports described the feasibility of transferring nonspecific lymphocytes from donors, which led to the development of cell therapy approaches based on virus-specific T cells, allowing a targeted treatment of infections, while limiting adverse events such as graft versus host disease (GvHD). Both expansion and direct selection techniques have yielded comparable results in terms of efficacy (around 70–80%), but efficacy is difficult to predict for individual cases. Generating bespoke products for each donor–recipient pair can be expensive, and there remains the major obstacle of generating products from seronegative or poorly responsive donors. More recent studies have focused on the feasibility of collecting and infusing partially matched third-party virus-specific T cells, reporting response rates of 60–70%. Future development of this approach will involve the broadening of applicability to multiple viruses, the optimization and cost-control of manufacturing, larger multicentred efficacy trials, and finally the creation of cell banks that can provide prompt access to virus-specific cellular product. The aim of this review is to summarise present knowledge on adoptive T cell manufacturing, efficacy and potential future developments.
Keywords:
haematopoietic stem cell transplantation; viral infections; adoptive cell therapy; third party donor

Haematopoietic stem cell transplantation (HSCT) represents an important curative option for a large group of malignant (mainly leukaemias and lymphomas) and nonmalignant disorders (e.g., primary immunodeficiencies and metabolic diseases). However, outcomes can be hampered by a wide spectrum of transplant-related complications including viral infections, which are a major cause of morbidity and mortality in transplanted patients [1]. Accurate incidences of viral infections in transplant settings are not reported consistently since differences in sample analysis (e.g., whole blood versus plasma) [2] or different viral load cut-offs for positivity, can lead to heterogeneous results [3]. Although pharmacological therapies are available to treat viral infections, many are ineffective due in part to drug resistance, or having to cease therapy due to drug-related toxicities. Furthermore, prolonged therapy is expensive. For these reasons, virus-specific T cells (VsTs), mainly cytotoxic T lymphocytes (CTLs), have been increasingly investigated as a treatment option for refractory viral infections in transplanted patients.
Different strategies for VsT manufacture have been employed to improve viral specificity of T cells towards single or multiple viruses, including methods of cell selection or in-vitro stimulation, choice of cell source, and HLA (human leukocyte antigen) matching. In this review, we illustrate the relevant differences in approaches to adoptive cell therapy using lymphocytes, focusing on factors influencing the efficacy of CTLs, and overview the latest advances and possible future developments of antiviral T-cell therapy.

3. From DLI to Virus-Specific T Cells and Beyond

Therapy with ex vivo-selected lymphocytes to treat viral infections after HSCT was originally based on infusion of nonspecific donor-derived lymphocytes (donor lymphocyte infusions: DLIs). The pioneering studies of this approach proved that restoring antiviral immunity in immunocompromised hosts was feasible and could cure refractory viral infections [25,26]. Good response rates were first observed in patients treated for EBV-driven post-transplant lymphoproliferative disease (PTLD) [25]. However, the broad T cell receptor repertoire of infused T cells, not specifically committed to antiviral activity, but also targeting host MHC, led to development or exacerbation of GVHD. This seemed to limit the use of DLI in transplanted patients, but refinement of the cellular product, through depletion of allo-reactive T cells [27,28], was implemented in order to reduce the risk of GVHD, yet preserving antiviral activity.
Further development of cellular therapies for viral infections focused on the specificities of T cells for different viruses, aiming to achieve higher response rates [29,30]. The first and most widely used protocols to develop virus-specific T cells (VSTs) were based on ex vivo generation and in vitro expansion of T cells, leading to a final product comprising polyclonal T cells (recognizing different immunogenic viral antigens), with the manufacture of substantial numbers of cells from a relatively small volume of blood. More importantly, one of the main advantages of ex vivo differentiation of VSTs is that it could overcome the potential obstacle represented by paucity of specific immunity for the virus in the donor immune system. However, this approach can require a long production time (from a minimum of 13 days and up to 3 months), which can limit the use of ex vivo-expanded VSTs in critically ill patients [31,32].
A more rapid way to obtain VSTs from the donor is direct selection of specific T cells, using either (1) viral peptide multimers conjugated to magnetic beads, to select highly pure cytotoxic T cells, or (2) stimulation with viral peptides followed by IFN-gamma capture assay with magnetic beads, which allows selection of both CD4+ and CD8+ virus-specific T cells. CD4+ T cell help is considered essential to induce a sustained immune response, whereas CD8+ T cells are responsible for the rapid antiviral effects. Therefore, a cellular product containing both CD4+ and CD8+ T cells is thought most likely to rapidly impart sustained protective immunity. These two approaches enable rapid production of cellular products specifically directed against viruses [33,34], although these techniques are mainly limited to donors that have already developed a specific immunological memory for the virus. Moreover, a large volume of donor blood (100–500 mL) is usually needed to obtain clinically useful cell doses. Furthermore, in vitro activation or expansion can exhaust the resulting T cells.
There have been no large controlled prospective randomized trials using good manufacturing practice (GMP) processes investigating the efficacy of VSTs obtained by either exvivo expansion or direct selection, though there have been many small-scale studies (Table 2). However, there are now plans for a multinational, placebo-controlled, Phase-III clinical trial (TRACE (transfer of multivirus-specific T cells), involving some of the authors, led by T.F.) which will aim to generate evidence so that adoptive transfer of virus-specific T cells can be included into evidence-based treatment guidelines to become a standard treatment for refractory viral infections post-HSCT.
Manufacturing virus-specific T cells is based upon knowledge of viral antigen immunogenicity. While some viral antigens capable of inducing an immunological response are well characterized (e.g., pp65 for CMV, EBNA2–6 for EBV), this is less understood for other viruses, such as AdV, HHV6 and BK virus. Dedicated BKV-specific T cell products manufactured using peptides and rapid antigen capture based on multimers have been described [40,41]. There is only one report on the use of ex vivo-specific CTLs for JC PML [42], which showed the proof of principle of this approach. Currently, a National Institutes of Health (NIH) Phase I study (NCT02694783) is recruiting patients for use of JC virus-specific CTLs in transplanted patients with PML.
Post-transplant management of viral infections can be particularly challenging in the presence of multiple refractory viral infections, and in order to obtain control of multiple infections with adoptive T cells, patients can be treated with multivirus-specific T cell therapy [32] (Table 3). The rationale is based on recognition by CTLs of immunodominant viral proteins derived from CMV, EBV and AdV simultaneously. This approach could incorporate targeting other viruses, such as HHV6 and BK virus [43]. The different immunogenic potentials of viral antigens could lead to antigen competition during in vitro manufacturing of CTLs, resulting in loss of specificity towards less immunogenic viral epitopes (such as AdV) in the final product. However, it has been shown that low frequencies of infused donor-derived CTLs can sufficiently expand in vivo with clinical benefit [44].

Donor-derived VST infusions are not always feasible in clinical practice due to the lack of specific immunity of donor cells (e.g., high-risk patients: CMV-seropositive receiving HSCT from CMV-seronegative donor), or the availability of the donor (e.g., patients undergoing UCB transplantation), and the time required for manufacture of the cellular product might be too prolonged to deal with the rapid clinical evolution of viral infection. Moreover, treatment failure can occur due to specific HLA restriction of donor-derived CTLs that are unable to recognize viral epitopes generated by viral DNA mutation and presented by a different HLA complex. In this scenario, use of more specific HLA restriction of T cells could correctly recognize viral antigens and clear the virus [53]. Ideally, the use of selected T cells with higher grades of specificity for particular HLA types could add additional benefit in terms of viral clearance, minimizing the risk of treatment failure.
The encouraging results following infusion of viral-specific T cells in solid organ-transplanted patients [59] suggested that third-party CTLs could be effectively used also in the setting of HSCT [53]. After a few initial reports [60,61] (Figure 1), demonstrating efficacy of third-party virus-specific T cells in HSCT patients, banks of third-party CTLs were developed in order to store specific antiviral T cell products that could be immediately available in the case of refractory infections. However, there are potential drawbacks to this approach: (1) partially matched cells might be recognized by the host immune system leading to rejection of CTLs; (2) the risk of alloreactive phenomena against recipient cells. Although few centers have implemented an “off-the-shelf” program of CTLs for HSCT recipients, and no randomized trials have been conducted yet, the published results suggest an overall response rate around 60–80% [62,63], both as prophylaxis and therapy, with a relatively low burden of severe complications (GvHD > grade II), similarly to donor-derived CTLs. This approach may be clinically beneficial in the early phases of post-transplant refractory infection, but lack of persistence of third party CTLs represents a concern, and there are still few data on long-term effects on viral clearance and specific immune reconstitution. Third-party CTLs have been detected up to 90 days after infusion, but persistence is expected to be shorter. Intriguingly, viral clearance is usually sustained, possibly related to specific antiviral immunity recovery following CTL infusion [63]. As mentioned above, third-party CTLs could also represent a promising alternative in patients who fail to respond to donor-derived CTLs and present viral genome mutations that lead to specific antigen–HLA combinations that are unrecognized by donor T cells. A more complete understanding of the mechanism of viral recognition by CTLs could lead to a personalized approach to adoptive cell therapy by matching the recipient HLA–epitope combination with the more appropriate HLA-restricted CTLs.

Viral infections after HSCT can be challenging for clinicians, and are a major cause of morbidity and mortality, especially in high-risk patients. Infusion of adoptive VSTs can tackle viral replication and restore antiviral immunity in patients not responding to antiviral drugs. The expected response rates are between 50–90%, with different manufacturing techniques, and even in the HLA partially matched setting, antiviral efficacy is reported around 50–70%. Toxicity is usually temporary and easily controlled, occurring only in a small proportion of patients. Further challenges might be addressed by broadening applicability to all transplanted patients (i.e., patients with active GvHD) and reducing the time to access cellular products using VST cell banks. Moreover, transplant-related mortality also arises from respiratory virus infections, JC and BK virus, and other viral infections that lack an effective antiviral treatment. Therefore, cellular products that can also target these viruses are required. Future challenges of adoptive therapies will include broadening applicability to different categories of patients, and the better definition of patient-oriented strategies. 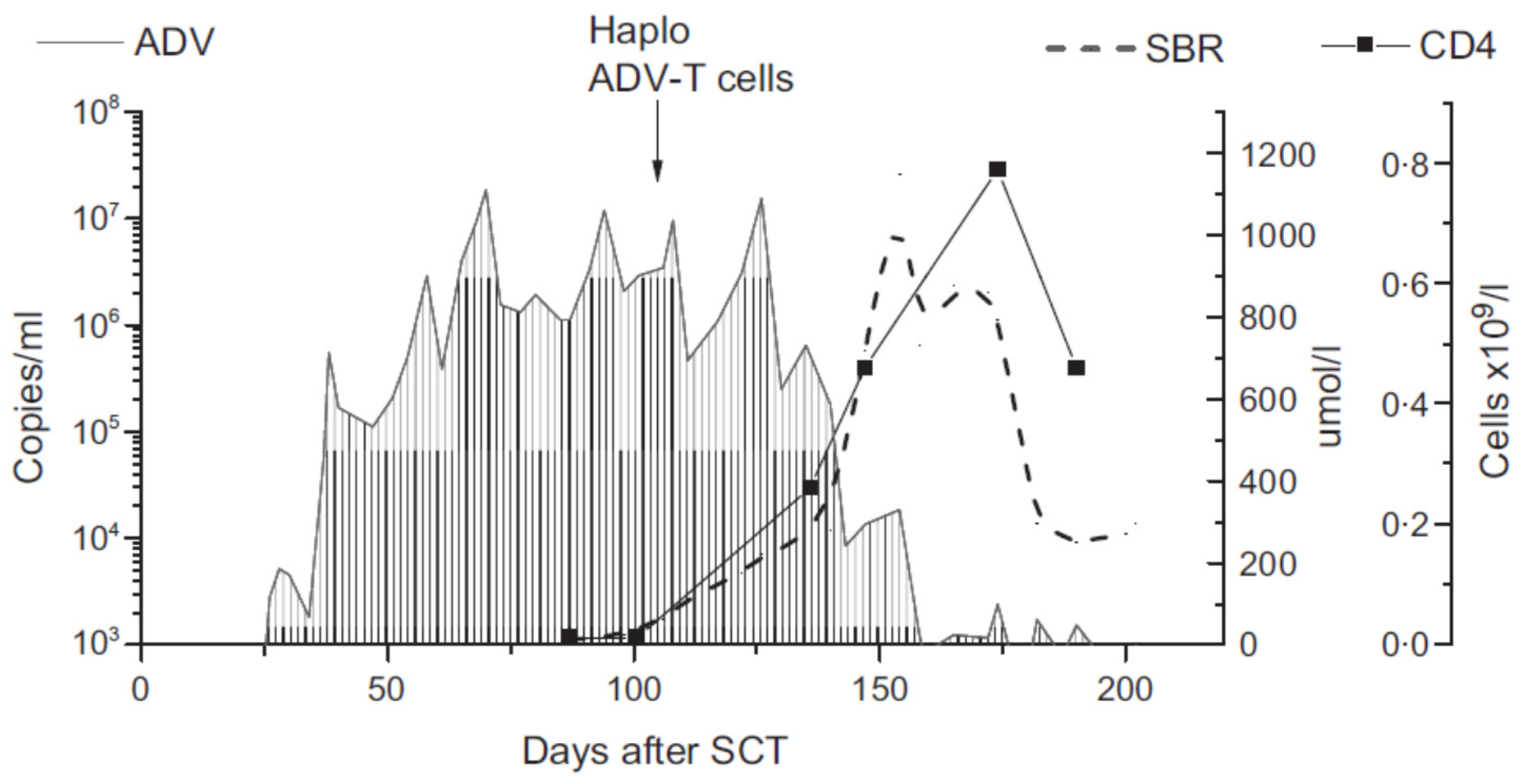