The intestinal mucosa of Crohn’s disease (CD) patients is abnormally colonized with adherent-invasive Escherichia coli (AIEC) that are able to adhere to and to invade intestinal epithelial cells (IECs), to survive in macrophages, and to induce a pro-inflammatory response. AIEC persist in the intestine, and induce inflammation in CEABAC10 transgenic mice expressing human CAECAM6, the receptor for AIEC. SUMOylation is a eukaryotic-reversible post-translational modification, in which SUMO, an ubiquitin-like polypeptide, is covalently linked to target proteins. Here, we investigated the role of SUMOylation in host responses to AIEC infection. We found that infection with the AIEC LF82 reference strain markedly decreased the levels of SUMO-conjugated proteins in human intestinal epithelial T84 cells. This was also observed in IECs from LF82-infected CEABAC10 transgenic mice. LF82-induced deSUMOylation in IECs was due in part to increased level of microRNA (miR)-18, which targets PIAS3 mRNA encoding a protein involved in SUMOylation. Over-expression of SUMOs in T84 cells induced autophagy, leading to a significant decrease in the number of intracellular LF82. Consistently, a decreased expression of UBC9, a protein necessary for SUMOylation, was accompanied with a decrease of LF82-induced autophagy, increasing bacterial intracellular proliferation and inflammation. Finally, the inhibition of miR-18 significantly decreased the number of intracellular LF82. In conclusion, our results suggest that AIEC inhibits the autophagy response to replicate intracellularly by manipulating host SUMOylation. View Full-Text
Keywords: Crohn’s disease; AIEC; post-translational modifications; SUMO; autophagy Crohn’s disease; AIEC; post-translational modifications; SUMO; autophagy
►▼ Show Figures 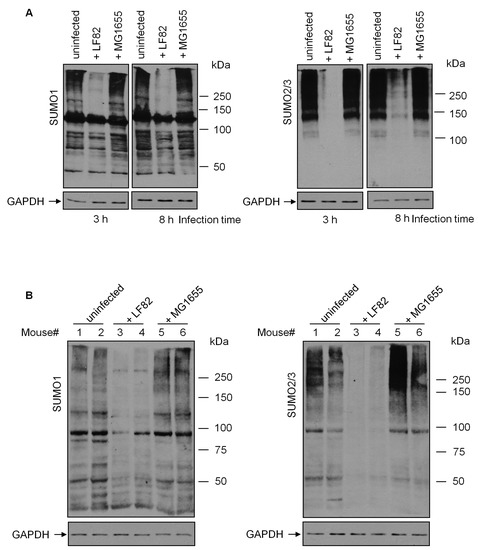