Long-term exposition to morphine elicits structural and synaptic plasticity in reward-related regions of the brain, playing a critical role in addiction. However, morphine-induced neuroadaptations in the dorsal striatum have been poorly studied despite its key function in drug-related habit learning. Here, we show that prolonged treatment with morphine triggered the retraction of the dendritic arbor and the loss of dendritic spines in the dorsal striatal projection neurons (MSNs). In an attempt to extend previous findings, we also explored whether the dopamine D4 receptor (D4R) could modulate striatal morphine-induced plasticity. The combined treatment of morphine with the D4R agonist PD168,077 produced an expansion of the MSNs dendritic arbors and restored dendritic spine density. At the electrophysiological level, PD168,077 in combination with morphine altered the electrical properties of the MSNs and decreased their excitability. Finally, results from the sustantia nigra showed that PD168,077 counteracted morphine-induced upregulation of μ opioid receptors (MOR) in striatonigral projections and downregulation of G protein-gated inward rectifier K+ channels (GIRK1 and GIRK2) in dopaminergic cells. The present results highlight the key function of D4R modulating morphine-induced plasticity in the dorsal striatum. Thus, D4R could represent a valuable pharmacological target for the safety use of morphine in pain management. View Full-Text
Keywords: dopamine; morphine; addiction; dopamine D4 receptor; caudate putamen; plasticity; receptor–receptor interaction dopamine; morphine; addiction; dopamine D4 receptor; caudate putamen; plasticity; receptor–receptor interaction
►▼ Show Figures 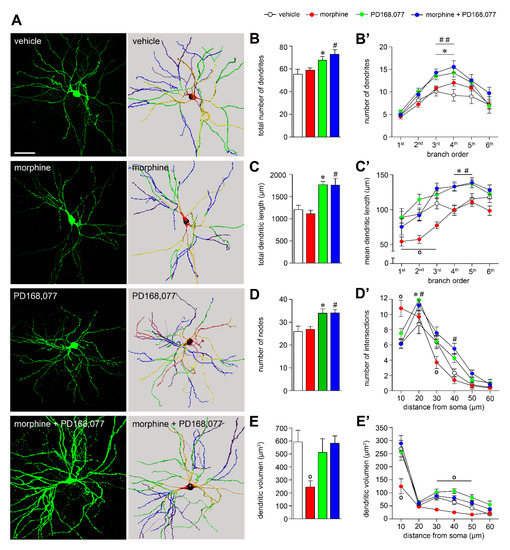