Background: Most work in endocrinology focus on the action of a single hormone, and very little on the cross-talks between two hormones. Here we characterize the nature of interactions between thyroid hormone and glucocorticoid signaling during Xenopus tropicalis metamorphosis. Methods: We used functional genomics to derive genome wide profiles of methylated DNA and measured changes of gene expression after hormonal treatments of a highly responsive tissue, tailfin. Clustering classified the data into four types of biological responses, and biological networks were modeled by system biology. Results: We found that gene expression is mostly regulated by either T3 or CORT, or their additive effect when they both regulate the same genes. A small but non-negligible fraction of genes (12%) displayed non-trivial regulations indicative of complex interactions between the signaling pathways. Strikingly, DNA methylation changes display the opposite and are dominated by cross-talks. Conclusion: Cross-talks between thyroid hormones and glucocorticoids are more complex than initially envisioned and are not limited to the simple addition of their individual effects, a statement that can be summarized with the pseudo-equation: TH ∙ GC > TH + GC. DNA methylation changes are highly dynamic and buffered from genome expression. View Full-Text
Keywords: Xenopus metamorphosis; thyroid hormone; glucocorticoids; cross-talks; functional genomics; DNA methylation Xenopus metamorphosis; thyroid hormone; glucocorticoids; cross-talks; functional genomics; DNA methylation
►▼ Show Figures 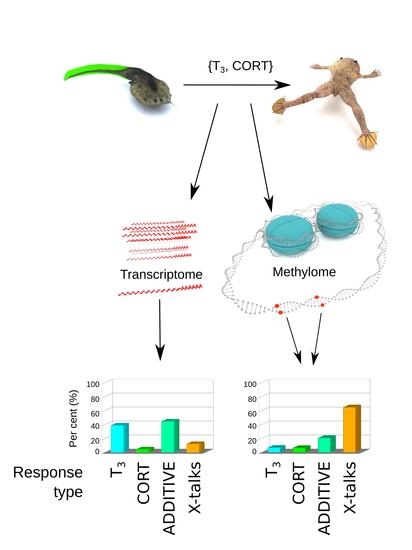