Dynamic, Transient, and Robust Increase in the Innervation of the Inflamed Mucosa in Inflammatory Bowel Diseases
Next Article in Special Issue

Identification of Novel Cathepsin B Inhibitors with Implications in Alzheimer’s Disease: Computational Refining and Biochemical Evaluation

Housekeeping Genes for Parkinson’s Disease in Humans and Mice

Currently, active investigations of gene expression are being carried out. The simplest and most widely used method for analysis of gene expression at the mRNA level is a semiquantitative approach based on the reverse transcription (RT) reaction and real-time quantitative polymerase chain reaction (qPCR). This method is considered the gold standard for the study of changes in gene expression at the mRNA level in biomedical investigations [1,2].
A critical aspect of this method, as for other semiquantitative methods, is the presence of reference genes as an internal control for the normalization of expression data for the genes of interest. Based on this, we can conclude that the precise determination of changes in the expression of candidate genes depends on the correct choice of internal reference genes. These genes are called housekeeping genes (HKGs).
Genes with stable expression in all biological samples and whose expression does not change under experimental conditions or under conditions of disease are most often considered as HKGs [3]. HKGs are considered to be genes that control basic metabolism and are responsible for cell survival, maintenance of cell homeostasis, and/or other fundamental processes in the cell [4].
It is believed that the expression of these genes should not depend on the influence of various factors acting on the cell, tissue, and organism, or these factors should have minimal effect. However, it is now becoming clear that the expression of the most common HKGs can depend on external conditions and changes in pathologies [5,6]. The significant disadvantages of using such HKGs in studies are the lack of validation of HKGs in specific experimental conditions, as well as the blind transfer of HKGs selected for one organism to another, without the accompanying careful verification. This, in turn, can leave an imprint on the results obtained and/or lead to false results in assessing changes in the expression of candidate genes [7,8,9].
Based on this observation, a search and selection of the most stably expressed HKGs for the analysis of gene expression in Parkinson’s disease (PD) were carried out. PD is one of the most common neurological diseases and is characterized predominantly by the death of dopaminergic neurons in the substantia nigra. Degeneration of dopaminergic neurons leads to disorganization of the function of almost all neurotransmitter systems of the brain. In this regard, the etiopathogenesis of PD has been widely studied, and active analysis of changes in gene expression under conditions of this pathology is being carried out. However, experimental results are often not reproducible or do not match. Perhaps this is due to differences in the HKGs used.
In this regard, we analyzed the reference genes in the peripheral blood of patients with PD, as well as in the tissues of the brain and peripheral blood of mice (Mus musculus), as the most widespread object for modeling PD [10].

In this study, 35 untreated and 12 treated patients with the sporadic form of PD (stages 1 and 2 of the Hoehn–Yahr scale) were analyzed. The mean age ± standard deviation (SD) at disease onset was 58.6 ± 7.4 years (range 46–71), and the mean age at enrollment was 59.2 ± 7.1 years (range 47–73). The PD patients with treatment received different medications with dopamine receptor agonists (l-dopa, piribedil, pramipexole, or amantadine) in various combinations.
PD patients were diagnosed with PD at the Research Center of Neurology (Moscow, Russia). They were selected and studied according to the International Movement Disorder Society Unified Parkinson’s Disease Rating Scale [11] and Hoehn–Yahr scores [12]. The diagnosis of PD was based on the UK PD Society Brain Bank Criteria [13].
44 neurologically normal healthy individuals were studied as controls. These participants were matched to the PD patients regarding gender, age, and ethnicity.
Patients and neurologically healthy volunteers (of Russian ethnic origin residing in European Russia) were selected at the Research Center of Neurology (Moscow, Russia). All participants were examined for the presence of frequent mutations in all genes responsible for monogenic forms of PD and did not have any family history of PD. All participants had no severe concomitant diseases, such as severe cardiovascular disease, cancer, or diabetes mellitus.
The study was conducted in accordance with the World Medical Assembly Declaration of Helsinki—Ethical Principles for Medical Research Involving Human Subjects. All blood samples were collected with the informed consent of the investigated subjects. The study was approved by the Ethics Committee of the Research Center of Neurology (Moscow, Russia), protocol 18/4.

Twenty C57BL/6 mice were purchased from the specific pathogen-free licensed nursery of the Shemyakin–Ovchinnikov Institute of Bioorganic Chemistry of the Russian Academy of Sciences. Eight-week-old male mice weighing 22–25 g were randomly divided into two groups for analysis: one control group and one experimental group. Each group of mice contained 10 individual animals. The mice were housed 3–4 to a cage under standard conditions with free access to food and water with a 12:12 h light:dark regime.

2.3. Modeling of Parkinson-like Phenotype with MPTP

A mouse model of the early symptomatic stage of PD was used in this study. Experimental work with laboratory animals was carried out in accordance with The Guide for the Care of Animals [14] as approved by the Ethics Committee of the Institute of Molecular Genetics of National Research Centre “Kurchatov Institute” (Moscow, Russia), protocol 3/21. Samples of 5.5 ± 0.35 mg of striatum, cortex, and cerebellum; 1.4 ± 0.22 mg of the substantia nigra; and 477.8 ± 80 μL of peripheral blood were taken from each animal for the study following decapitation.
All efforts were made to minimize the potential suffering and discomfort of animals, and care was taken according to the 3R rule (replacement, reduction, and refinement).

2.5. Analysis of Changes in Relative Levels of mRNAs

Gene expression analysis was conducted using RT-qPCR with TaqMan probes. All samples were handled as equally as possible in order to minimize any random biases. Single-stranded DNA was synthesized using 120 ng of total RNA, 100 ng of Escherichia coli tRNA as a carrier [15], specific primers, and the RevertAid H Minus First Strand cDNA Synthesis Kit (Thermo Fischer Scientific Inc., Waltham, MA, USA) according to the manufacturer’s recommendations. Each RT reaction was run in triplicate.
Primers and probes for qPCR were selected using the Beacon Designer 7.0.2 program and the nucleotide sequences of the genes of humans, mice, and rats. The sequences of gene-specific primers and probes are listed in Table S1.
cDNA obtained in the reverse transcription reaction was used as a template for qPCR. This was diluted 50 times in an aqueous solution of tRNA from Escherichia coli (0.02 ng/μL) [15]. qPCR was performed using the StepOnePlus System (Applied Biosystems, USA), QuantStudio 3 System (Thermo Fischer Scientific Inc., Waltham, MA, USA), and PCR reagents (Syntol, Moscow, Russia). Thermal cycling for samples from mice and humans was performed as follows: 60 s at 50 °C; 40 cycles of 15 s at 95 °C and 40 s at 61 °C; 30 s at 25 °C. Thermal cycling for samples from rats was performed as follows: 600 s at 95 °C and 45 cycles: 5 s at 95 °C followed by 10 s at 60 °C. The reaction was repeated three times for each cDNA to correct for differences in sample quality and reverse transcription efficiency.

Primers and probes for analysis were selected using Beacon Designer 7.0 (Premier Biosoft International, San Francisco, CA, USA) and corresponding sequences from the NCBI database [16]. The specificities of primers and probes were checked using Primer3 [17] and Primer-BLAST [18]. Evaluation of expression of reference genes was performed using Cq values and the RefFinder tool [19].
The RefFinder program calculates the score of reference genes using the algorithms of geNorm [7], Normfinder [8], and BestKeeper [20] programs and the comparative ΔΔCt method [21].
Based on these scores, the program assigns an appropriate score to each gene and calculates the geometric mean of their weights for the overall final ranking. The program chooses the lowest score among the ranks assigned by each algorithm separately and then assigns the final comprehensive score. The closer the final score is to one, the more stably expressed the HKG is considered to be.

The data obtained indicate that there is no universal HKG both for different brain tissues of one organism and for similar tissues of different organisms. This conclusion is supported by other studies: researchers must select and validate a set of reference genes for each specific cell line [41].
In addition, we have shown that the presence of a pathological process may affect the expression of HKGs. This fact must be taken into account when choosing the optimal HKG for expression analysis in pathological conditions. In this case, it is necessary to choose those HKGs that are most stably expressed in both experimental and control groups, in other words, regardless of experimental conditions.
In conclusion, it should be noted that there are certain limitations of the use of the HKGs selected in this study as the most stably expressed. Thus, these HKGs can be most confidently used to study the pathological process caused by the pathogenesis of PD in young mice, as well as for PD patients at relatively early stages of the pathological process.

The following are available online at https://www.mdpi.com/article/10.3390/cells10092252/s1, Table S1: Sequences of gene-specific primers and probes for qPCR (TaqMan).

We are deeply grateful to Sergey N. Illarioshkin and Alexey V. Karabanov (Research Center of Neurology) for the provided samples of peripheral blood of patients and healthy volunteers. 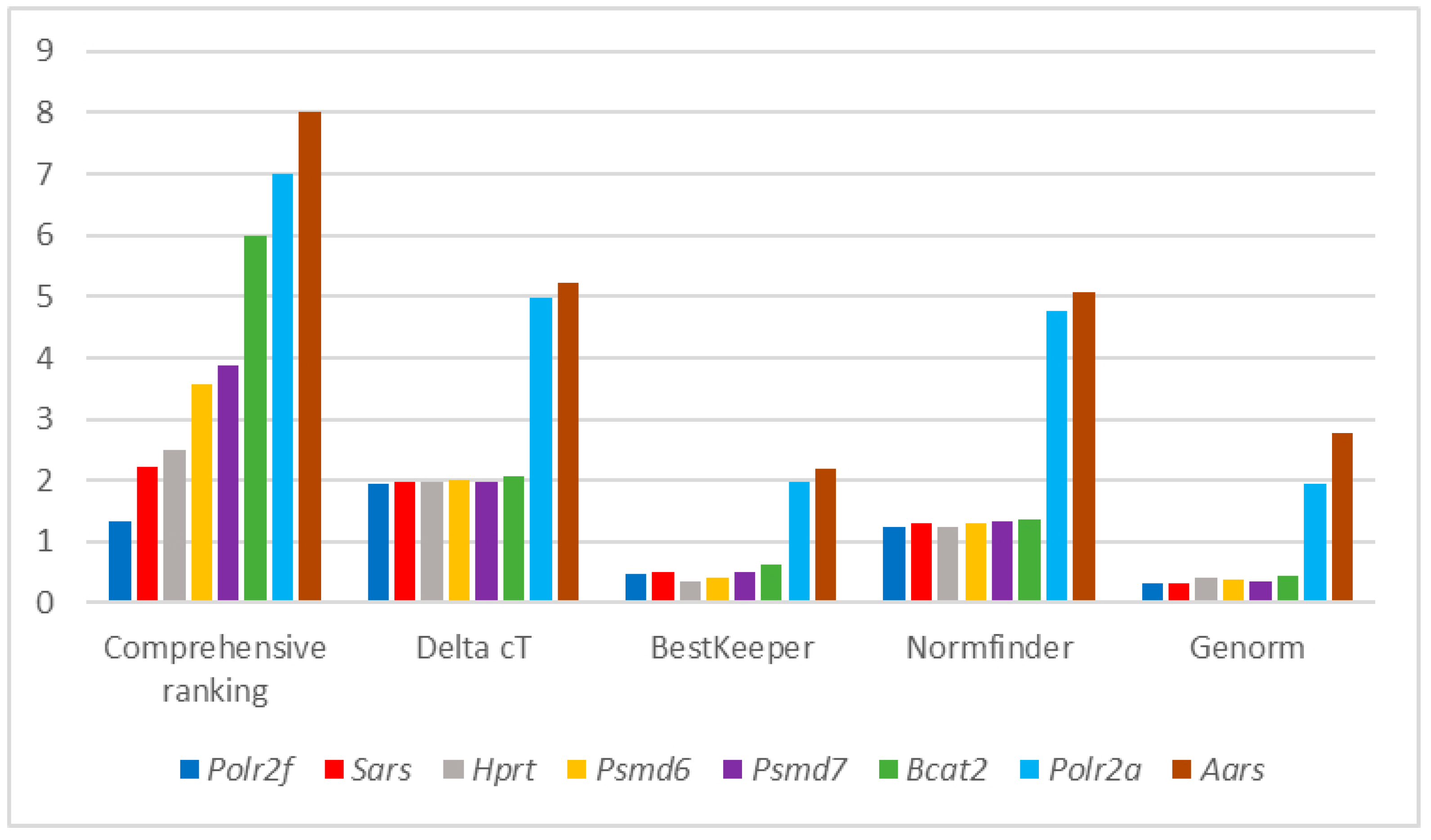