Influence of Subcellular Localization and Functional State on Protein Turnover

The regulator of G-protein signaling 5 (RGS5) acts as an inhibitor of Gαq/11 and Gαi/o activity in vascular smooth muscle cells (VSMCs), which regulate arterial tone and blood pressure. While RGS5 has been described as a crucial determinant regulating the VSMC responses during various vascular remodeling processes, its regulatory features in resting VSMCs and its impact on their phenotype are still under debate and were subject of this study. While Rgs5 shows a variable expression in mouse arteries, neither global nor SMC-specific genetic ablation of Rgs5 affected the baseline blood pressure yet elevated the phosphorylation level of the MAP kinase ERK1/2. Comparable results were obtained with 3D cultured resting VSMCs. In contrast, overexpression of RGS5 in 2D-cultured proliferating VSMCs promoted their resting state as evidenced by microarray-based expression profiling and attenuated the activity of Akt- and MAP kinase-related signaling cascades. Moreover, RGS5 overexpression attenuated ERK1/2 phosphorylation, VSMC proliferation, and migration, which was mimicked by selectively inhibiting Gαi/o but not Gαq/11 activity. Collectively, the heterogeneous expression of Rgs5 suggests arterial blood vessel type-specific functions in mouse VSMCs. This comprises inhibition of acute agonist-induced Gαq/11/calcium release as well as the support of a resting VSMC phenotype with low ERK1/2 activity by suppressing the activity of Gαi/o. View Full-Text
Keywords: RGS proteins; G-protein signaling; VSMC phenotype; ERK1/2; blood pressure RGS proteins; G-protein signaling; VSMC phenotype; ERK1/2; blood pressure
►▼ Show Figures 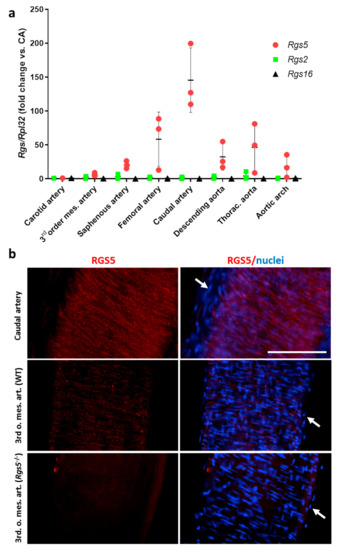