NNRTI and Liver Damage: Evidence of Their Association and the Mechanisms Involved
Previous Article in Special Issue

ROCK Inhibition as Potential Target for Treatment of Pulmonary Hypertension

Background: Endothelial dysfunction is central to PAH. In this study, we simultaneously analysed circulating levels of endothelial microvesicles (EMVs) and progenitor cells (PCs) in PAH and in controls, as biomarkers of pulmonary endothelial integrity and evaluated differences among PAH subtypes and as a response to treatment. Methods: Forty-seven controls and 144 patients with PAH (52 idiopathic, 9 heritable, 31 associated with systemic sclerosis, 15 associated with other connective tissue diseases, 20 associated with HIV and 17 associated with portal hypertension) were evaluated. Forty-four patients with scleroderma and 22 with HIV infection, but without PAH, were also studied. Circulating levels of EMVs, total (CD31+CD42b−) and activated (CD31+CD42b−CD62E+), as well as circulating PCs (CD34+CD133+CD45low) were measured by flow cytometry and the EMVs/PCs ratio was computed. In treatment-naïve patients, measurements were repeated after 3 months of PAH therapy. Results: Patients with PAH showed higher numbers of EMVs and a lower percentage of PCs, compared with healthy controls. The EMV/PC ratio was increased in PAH patients, and in patients with SSc or HIV without PAH. After starting PAH therapy, individual changes in EMVs and PCs were variable, without significant differences being observed as a group. Conclusion: PAH patients present disturbed vascular homeostasis, reflected in changes in circulating EMV and PC levels, which are not restored with PAH targeted therapy. Combined measurement of circulating EMVs and PCs could be foreseen as a potential biomarker of endothelial dysfunction in PAH. View Full-Text
Keywords: pulmonary arterial hypertension; endothelial dysfunction; biomarkers; progenitor cells; endothelial extracellular vesicles; PAH-specific treatment pulmonary arterial hypertension; endothelial dysfunction; biomarkers; progenitor cells; endothelial extracellular vesicles; PAH-specific treatment
►▼ Show Figures 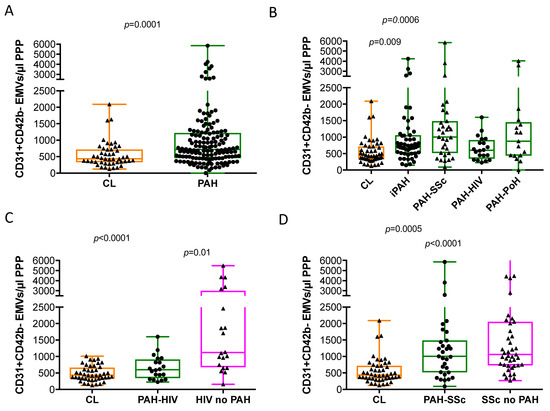