Mycobacterium tuberculosis Binds Human Serum Amyloid A, and the Interaction Modulates the Colonization of Human Macrophages and the Transcriptional Response of the Pathogen
Previous Article in Journal

Mycobacteria exploit at least two independent global systems in response to DNA damage: the LexA/RecA-dependent SOS response and the PafBC-regulated pathway. Intracellular pathogens, such as Mycobacterium tuberculosis, are exposed to oxidative and nitrosative stress during the course of infection while residing inside host macrophages. The current understanding of RecA-independent responses to DNA damage is based on the saprophytic model of Mycobacterium smegmatis, a free-living and nonpathogenic mycobacterium. The aim of the present study was to identify elements of RecA-independent responses to DNA damage in pathogenic intracellular mycobacteria. With the help of global transcriptional profiling, we were able to dissect RecA-dependent and RecA-independent pathways. We profiled the DNA damage responses of an M. tuberculosis strain lacking the recA gene, a strain with an undetectable level of the PafBC regulatory system, and a strain with both systems tuned down simultaneously. RNA-Seq profiling was correlated with the evaluation of cell survival in response to DNA damage to estimate the relevance of each system to the overall sensitivity to genotoxic agents. We also carried out whole-cell proteomics analysis of the M. tuberculosis strains in response to mitomycin C. This approach highlighted that LexA, a well-defined key element of the SOS system, is proteolytically inactivated during RecA-dependent DNA repair, which we found to be transcriptionally repressed in response to DNA-damaging agents in the absence of RecA. Proteomics profiling revealed that AlkB was significantly overproduced in the ΔrecA pafBCCRISPRi/dCas9 strain and that Holliday junction resolvase RuvX was a DNA damage response factor that was significantly upregulated regardless of the presence of functional RecA and PafBC systems, thus falling into a third category of DNA damage factors: RecA- and PafBC-independent. While invisible to the mass spectrometer, the genes encoding alkA, dnaB, and dnaE2 were significantly overexpressed in the ΔrecA pafBCCRISPRi/dCas9 strain at the transcript level. View Full-Text
Keywords: DNA damage repair; SOS response; tuberculosis DNA damage repair; SOS response; tuberculosis
►▼ Show Figures 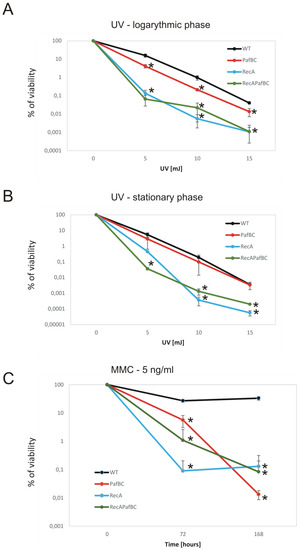