The chemical structures of ar-turmerone analogs are shown in Figure 1A–H. The synthetic procedures of (S)-ar-turmerone, (R)-ar-turmerone, ar-atlantone, turmeronol A, α-atlantone, and analog 1 have been described previously [19,20]. Analogs 2 and 3 were prepared according to the reported method [20,21]. Detailed methods for preparing analogs 2 and 3 are described in the supplementary materials and are shown in Figure S1. All chemicals were purified to >98% by high-performance liquid chromatography.

2.2. Cultivation of Cells and Slices and Drug Treatment

Reverse transcription–quantitative polymerase chain reaction (RT-qPCR) was conducted as previously described [25]. After drug treatment for the indicated periods, total RNA was extracted from cultured cells or slices using RNAiso plus (catalog No. 9109, TaKaRa-Bio, Shiga, Japan), according to the manufacturer’s protocol. RT was performed using PrimeScript® RT Master Mix (Catalog No. RR036B, TaKaRa-Bio). Real-time qPCR was performed using a KAPA SYBR Fast qPCR Kit (catalog No. KAPA Biosystems, Wilmington, MA, USA) on a CFX Connect™ real-time system (Bio-Rad Laboratories, Hercules, CA, USA). The primer sequences are listed in Table 1. The reactions were quantified by selecting the amplification cycle when the PCR product of interest was first detected (the threshold cycle). Data were analyzed with the comparative threshold cycle method. The glyceraldehyde 3-phosphate dehydrogenase (GAPDH) mRNA level was used as the internal control for each sample. The Ct values of GAPDH in all RT-qPCR experiments are shown in Figure S2. The Ct values of GAPDH in each experiment were relatively similar and were not significantly affected by any treatment.

The concentration of nitrite in the culture medium reflects the amount of NO released from the cultured slices. Its concentration was determined with a colorimetric Griess assay. The culture media were reacted with an equal volume of Griess reagent (catalog No. G4410, Sigma-Aldrich) for 10 min at room temperature. The amount of diazonium compound was determined based on the absorbance at a wavelength of 560 nm.

3.1. Effects of Aromatic-Turmerone Analogs on the Inflammatory Activation of Microglial BV2 Cells

The chemical structures of the naturally occurring S-enantiomer of ar-turmerone ((S)-ar-turmerone (S-Tur)) and its analogs are shown in Figure 1. We first compared the anti-inflammatory effects of S-Tur, an R-enantiomer of ar-turmerone ((R)-ar-turmerone (R-Tur)), a racemic mixture of S-Tur and R-Tur ((±)-ar-turmerone (±-Tur)), ar-atlantone (Atl), and turmeronol A (TurA) (Figure 1A–D) on the LPS-triggered inflammatory activation of BV2 cells. All analogs were treated at 20 μM because S-Tur prominently inhibited LPS-induced microglial activation at this concentration in a previous study [14].BV2 cells were concomitantly treated with each analog and LPS (10 ng/mL) for 24 h. All five compounds significantly inhibited the mRNA elevation of iNOS and IL-1β, which are inflammatory factors and are upregulated by LPS treatment (Figure 2A,B). Among the four analogs of S-Tur, R-Tur, and Atl inhibited the LPS-induced elevation of iNOS mRNA more potently than S-Tur (Figure 2A), although all analogs similarly hampered the upregulation of IL-1β mRNA (Figure 2A). To obtain better derivatives, we synthesized four different analogs from Atl: α-atlantone (α-Atl) and three unnamed compounds (analog 1–3, A1–A3) (Figure 1E-H). Among these four analogs, one analog (A2) significantly inhibited the LPS-triggered elevation of iNOS mRNA (Figure 2C). Regarding IL-1β mRNA, α-Atl, A2, and A3 significantly prevented its upreglulation (Figure 2D). A2 showed a stronger inhibitory effect than that of S-Tur on the elevation of both inflammatory factors in BV2 cells.

Next, we investigated the effect of S-Tur and three analogs (R-Tur, Atl, and A2) that showed stronger anti-inflammatory effects than those of S-Tur in BV2 cells on dopaminergic neurodegeneration triggered by sequential treatments of IFNγ and LPS in midbrain slice cultures from rats [7]. These four compounds significantly prevented the loss of tyrosine hydroxylase (TH)-positive dopaminergic neurons (Figure 3A,B). Nitric oxide (NO) is involved in the inflammatory degeneration of dopaminergic neurons in the midbrain slice cultures [7]. However, none of these compounds altered the elevation of nitrites, a metabolite of NO, in the culture media (Figure 3C). In addition, none of these compounds affected the elevated immunoreactivity of iNOS in the midbrain slice cultures (Figure 3D). Furthermore, S-Tur and R-Tur did not inhibit the elevation of iNOS and IL-1β mRNA levels, while Atl prevented the significant elevation of iNOS mRNA triggered by IFNγ/LPS (Figure 3E,F). A2 significantly inhibited the elevation of iNOS and IL-1β mRNAs in cultured midbrain slices (Figure 3G,H). However, the inhibitory effects of A2 were around 50% and were smaller than those in BV2 cells (more than 80% inhibition, Figure 2C,D). These findings indicate that ar-turmerone analogs prevent dopaminergic neurodegeneration independently of the inhibition of NO production, although Atl and A2 partly inhibit microglial activation by IFNγ/LPS in cultured midbrain slices.

To elucidate the mechanism of how ar-turmerone analogs directly protect dopaminergic neurons, we used the immortalized dopaminergic neuronal precursor cells, Lund human mesencephalic (LUHMES) cells [24], because the population of dopaminergic neurons is small among all cells in midbrain slice cultures. A previous report demonstrated that ar-turmerone (S-Tur) activates nuclear factor erythroid 2-related factor 2 (Nrf2) in BV2 cells [14]. Activation of Nrf2 upregulates various anti-oxidative proteins, including heme oxidase-1 (HO-1) and NAD(P)H:quinone oxidoreductase 1 (NQO1), and increases glutathione (GSH) through the upregulation of glutamate-cysteine ligase (GCL), a rate-limiting enzyme for GSH synthesis [31]. GCL consists of catalytic (GCLC) and modifier (GCLM) subunits. As MPP+ inhibits mitochondrial complex I and increases mitochondrial reactive oxygen species (ROS) in dopaminergic neurons [2], anti-oxidative proteins and GSH would protect dopaminergic neurons from MPP+ toxicity. Therefore, we investigated the effects of ar-turmerone analogs on Nrf2 activation. LUHMES cells were treated with 10 μM MPP+ in the presence or absence of 20 μM ar-turmerone analogs for 48 h. Immunoblot analyses revealed that co-treatment of A2 and MPP+ significantly increased the amount of Nrf2 in LUHMES cells compared with MPP+ alone (Figure 6). In addition, immunostaining experiments revealed that Atl and A2 significantly enhanced the nuclear translation of Nrf2 compared with MPP+ alone (Figure 7A,B). Furthermore, Atl and A2 prominently increased nuclear Nrf2 in TH-positive dopaminergic neurons in midbrain slice cultures (Figure 7C).
Under normal conditions, Kelch-like ECH-associated protein 1 (Keap1) interacts with Nrf2 in the cytoplasm and negatively regulates the expression of Nrf2 via the ubiquitination and proteasomal degradation of Nrf2 [31]. Keap1 acts as a sensor protein of oxidative and electrophilic stress [32]. In stress conditions, Nrf2 is released from Keap1, increased, and translocated to nuclei, leading to the upregulation of anti-oxidative proteins, as described above. Although the cotreatment of MPP+ and A2 significantly increased the amount of Keap1, none of the analogs significantly altered the amount of Keap1, compared with MPP+ alone (Figure 6). Interestingly, Atl and A2 triggered slight bandshifts of Keap1 to higher molecular weights (Figure 6A, arrow). A2 significantly increased the expression of GCLM, GCLC, HO-1, and NQO1 compared with MPP+ alone (Figure 6). Atl also significantly increased GCLM and NQO1 (Figure 6). These findings indicate that Atl and A2 activate Nrf2 and upregulate anti-oxidative proteins in LUHMES cells.

In the present study, we first revealed that ar-turmerone and its analogs inhibit dopaminergic neurodegeneration in midbrain slice cultures, probably through the activation of Nrf2 in dopaminergic neurons. This direct neuroprotective effect is supported by the recent finding that ar-turmerone inhibits apoptosis of primary cultured cerebellar granule cells [45]. Among the analogs, A2 has both anti-inflammatory and neuroprotective activities. Therefore, A2 might be a potential candidate for treating PD. As oral administration of ar-turmerone shows anti-depressive activity in mice [46], A2 would also be orally available and penetrate the blood-brain barrier. Further studies are expected to evaluate the in vivo efficacy of A2 on PD model animals.

The following are available online at https://www.mdpi.com/article/10.3390/cells10051090/s1, Figure S1: Schematic illustration of the synthetic procedures of analog 2 and analog 3, Figure S2: Ct values of GAPDH in all RT-qPCR experiments, Figure S3: Whole images of immunoblot experiments in Figure 6, Figure S4: The effect of R-Tur on the markers of anti-inflammatory activation of microglia in midbrain slice cultures, Figure S5: Effect of 8 h of treatment with MPP+ and S-Tur on Nrf2 expression in LUHMES cells. 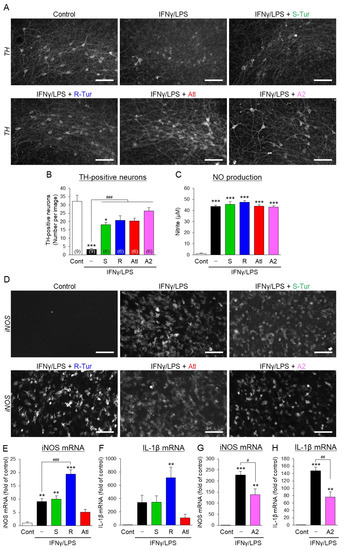 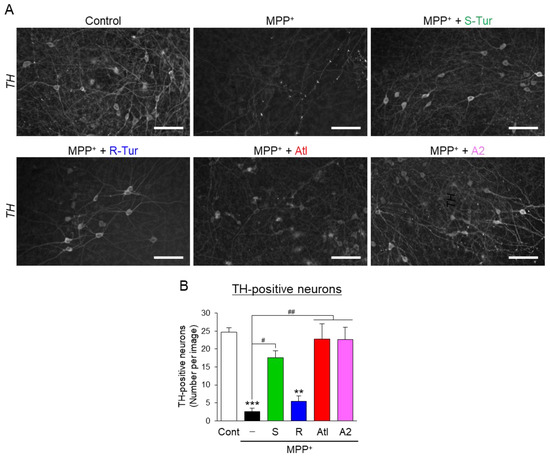 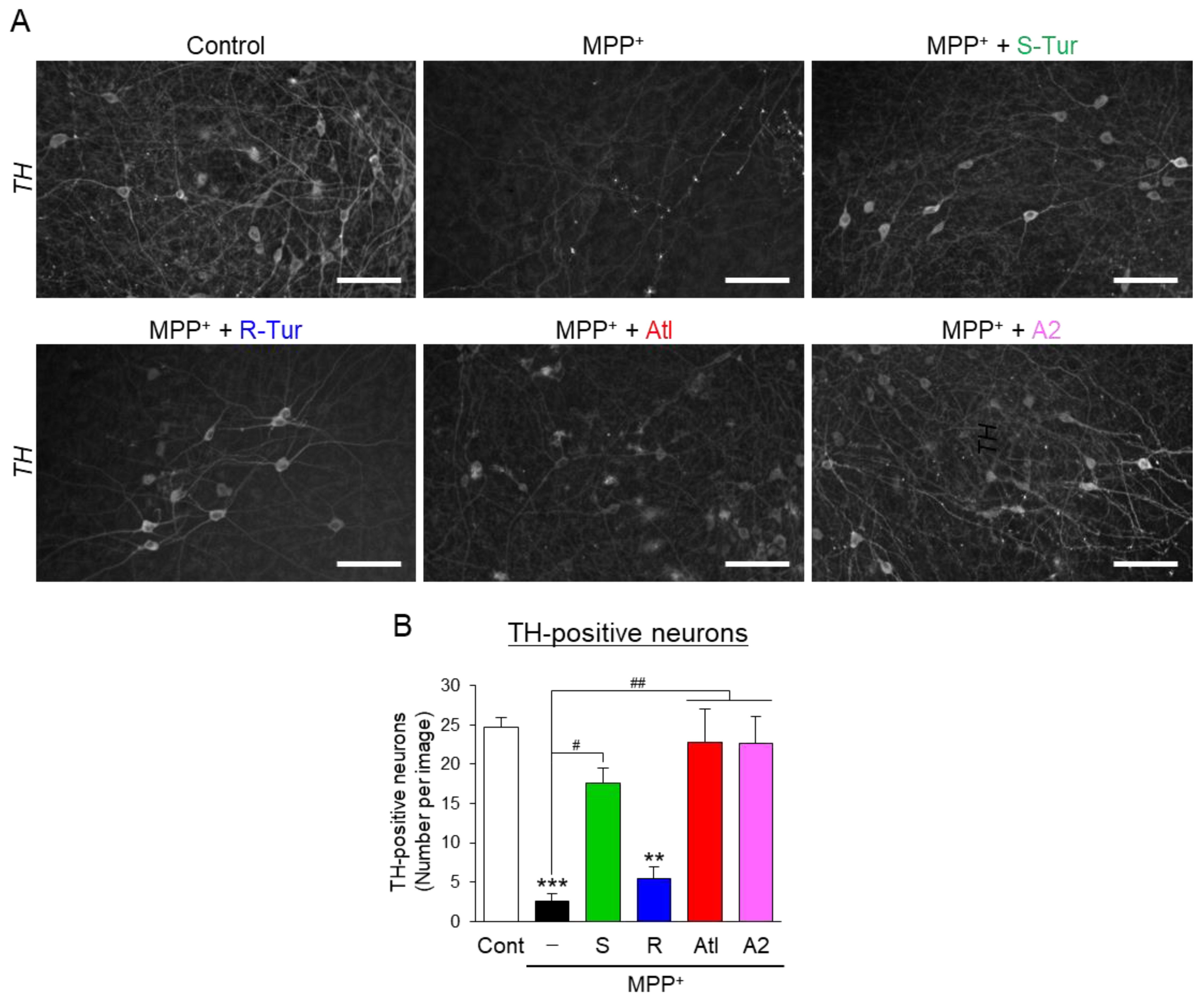 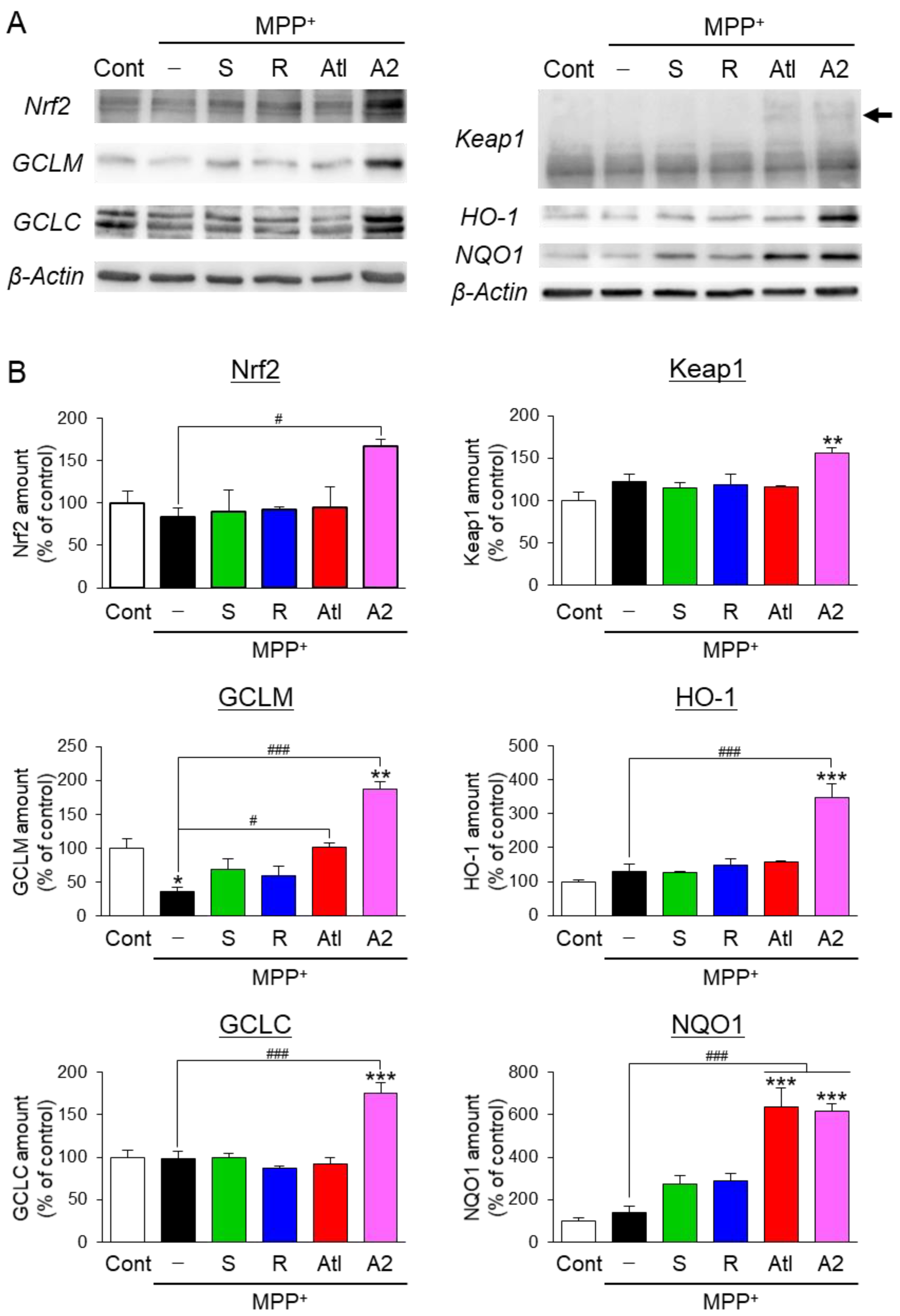 Table 1. Primer sequences used in the RT-PCR analyses.
Table 1. Primer sequences used in the RT-PCR analyses.
© 2021 by the authors. Licensee MDPI, Basel, Switzerland. This article is an open access article distributed under the terms and conditions of the Creative Commons Attribution (CC BY) license (https://creativecommons.org/licenses/by/4.0/).
We use cookies on our website to ensure you get the best experience. Read more about our cookies here.
Accept
We have just recently launched a new version of our website. Help us to further improve by taking part in this short 5 minute survey here. here.
Never show this again