Cells: Are They (Still) Essential for Dental Regeneration?
Previous Article in Journal

Current gold-standard strategies for bone regeneration do not achieve the optimal recovery of bone biomechanical properties. To bypass these limitations, tissue engineering techniques based on hybrid materials made up of osteoprogenitor cells—such as mesenchymal stem cells (MSCs)—and bioactive ceramic scaffolds—such as calcium phosphate-based (CaPs) bioceramics—seem promising. The biological properties of MSCs are influenced by the tissue source. This study aims to define the optimal MSC source and construct (i.e., the MSC–CaP combination) for clinical application in bone regeneration. A previous iTRAQ analysis generated the hypothesis that anatomical proximity to bone has a direct effect on MSC phenotype. MSCs were isolated from adipose tissue, bone marrow, and dental pulp, then cultured both on a plastic surface and on CaPs (hydroxyapatite and β-tricalcium phosphate), to compare their biological features. On plastic, MSCs isolated from dental pulp (DPSCs) presented the highest proliferation capacity and the greatest osteogenic potential. On both CaPs, DPSCs demonstrated the greatest capacity to colonise the bioceramics. Furthermore, the results demonstrated a trend that DPSCs had the most robust increase in ALP activity. Regarding CaPs, β-tricalcium phosphate obtained the best viability results, while hydroxyapatite had the highest ALP activity values. Therefore, we propose DPSCs as suitable MSCs for cell-based bone regeneration strategies.
Keywords: mesenchymal stem cell; dental pulp; beta-tricalcium phosphate; hydroxyapatite; osteogenesis; regenerative medicine mesenchymal stem cell; dental pulp; beta-tricalcium phosphate; hydroxyapatite; osteogenesis; regenerative medicine

Bone regeneration and bone remodelling can be considered two sides of the same coin. While bone remodelling is a life-long process, bone regeneration occurs mainly during bone healing [1]. It is described that, for small fractures or injuries, the bone has an innate ability to repair without scarring [2]. These regenerative processes are largely surpassed by major bone damage, such as skeletal reconstruction surgeries, bone defects of various origins (e.g., traumatic, infectious, or tumoral), or congenital skeletal dysplasias. Current orthopaedic surgery strategies are mostly bone grafting (both autologous and allogeneic) and osteodistraction [3]. They can be combined with the use of growth factors or osteoinductive scaffolds. However, the successful recovery of the biomechanical properties of bone is limited. To bypass these limitations, novel strategies have been developed. Among these, hybrid materials consisting of osteoprogenitor cells, such mesenchymal stem cells (MSCs) and bioactive ceramic scaffolds, have been proposed as promising tools [4].
Calcium phosphate-based (CaPs) bioceramics have been used both in maxillo-facial surgeries and dentistry for over 30 years. CaPs are biocompatible, osteoconductive, osteoinductive and, in some cases, bioactive. Due to these properties, CaPs have been widely used as scaffolds for bone regeneration and tissue engineering. Among the different CaPs bioceramics, hydroxyapatite (HA) and β-tricalcium phosphate (β-TCP) have been widely used [5]. The Ca:P ratio determines certain properties, such as solubility and tendency for resorption in the body [6]. HA is considered relatively non-biodegradable, while β-TCP degrades readily and can be completely replaced by newly formed bone.
Adult MSCs can be isolated from almost every tissue [7]. They have multipotential capacities and can differentiate into cells of several mesenchymal lineages (e.g., cartilage, bone, tendons, muscles, and adipocytes), among other cell types [8]. Moreover, MSCs have migratory and homing abilities that are crucial for wound healing, and their immunomodulatory and immunological tolerance induction potentials have been communicated [9,10,11]. Although MSCs derived from different sources present similar phenotypic characteristics, the intensity of these varies depends on the tissue source [12].
Bone marrow MSCs (BM-MSCs) were the first MSCs known, described by Friedenstein et al. [13]. They have been widely used and studied in trials looking for potential regenerative therapies. Adipose-derived MSCs (ASCs) present several advantages, compared to MSCs obtained from other sources: Adipose depots are ubiquitous in the body, easily accessible with minimal invasion, and contain a large number of stem cells [14]. Furthermore, their capacity to promote osteogenesis in animal models has been described [15]. MSCs isolated from dental pulp (DPSCs) are usually isolated after the surgical removal of wisdom teeth and, so, they are considered a non-invasive source of MSCs. DPSCs present a high proliferative capacity and easily differentiate into odontoblasts, osteoblasts, and chondrocytes [16,17]. DPSCs have been recently proposed for use in regenerative therapies for bone diseases, among other conditions [18].
Considering the osteogenic potential as a property influenced by the tissue, several comparative studies of MSCs derived from various sources on different surfaces have been published [19,20,21,22,23,24]. Despite these studies, clarification is still needed regarding the influence of the cell source and surface on the osteogenic potential. Osteogenic potential maximisation in the context of bone-regeneration processes would serve as an important step. This study aims to define the MSC source and construct (MSC and scaffold) combination with the highest osteogenic potential.

Data were obtained in a previous proteomic analysis, in which MSCs from subchondral bone and cartilage were compared (not published). Specifically, the results obtained after comparing these locations in healthy individuals were analysed.
Briefly, MSCs were obtained surgically from subchondral bone and cartilage of a donor without osteoporotic or osteoarthritic signs. Total protein content was isolated, dried in air, and then re-suspended in 25 μL of iTRAQ dissolution buffer (ABSciex, Foster City, CA, USA). Protein concentrations were determined by Bradford assay (Sigma-Aldrich, St. Louis, MO, USA). TRAQ labelling (ABSciex, Foster City, CA, USA) was performed with SB(116) and C(117) mass tags and desalted with home-made C-18 Stage-tips. Fractions separated in a nanoLC system (Tempo, Eksigent) were automatically deposited on a MALDI plate and analysed by MS/MS (4800 MALDI-TOF/TOF system; ABSciex). Relative quantitative analysis was performed using the ProteinPilot software (ABSciex) with the Paragon™ Algorithm for protein identification and quantification. Only proteins identified with at least 95% confidence, a Prot Score of at least 1.3, a p-value ≤ 0.05, and ratio ≠ 1 were considered as modulated.

MSCs from three different localisations (bone marrow, dental pulp, and adipose tissue), obtained from healthy donors (Table 1), were used for in vitro biological studies. Written informed consent was obtained from all donors before sample collection. The study was approved following the guidelines of the institutional ethics committee (Comité Ético de Investigación Clínica Hospital Clínico San Carlos) and the principles expressed in the Declaration of Helsinki.
Discs of CaPs bioceramics used in this study were synthesised, sintered, and polished (if needed). They were kindly supplied by the Instituto de Cerámica y Vidrio (ICV-CSIC). The discs had a diameter of 18 mm and 4 mm thickness. The sintering temperature employed for β-TCP was 1130 °C, and that for HA was 1250 °C [25,26].

ASCs were obtained from adipose tissue after surgical biopsies, according to Yang et al. [27]. DPSCs were isolated after dental pulp mechanical extraction from wisdom exodontias, as described by Huang et al. [28]. Finally, BM-MSCs were obtained from femoral channel aspirates of bone marrow, taken during joint replacement surgery, in a Ficoll density gradient and cultured directly, as described by Gudlevicine et al. [29].
Once isolated, cells were expanded in growth medium: DMEM supplemented with 10% FBS and antibiotics. DPSCs required 20% FBS, instead of the 10% usually established, as described by Alkhalil et al. [30]. Cell cultures were expanded at 37 °C in a 5% CO2 atmosphere. The medium was changed every 3 days until cell confluence at passage 3.

In order to confirm that cells satisfied the minimal criteria for the definition of MSC proposed by the International Society for Cellular Therapy [31], flow cytometry and histochemistry assays were carried out, as we have previously described [32].

2.5. Biological Features on the Plastic Surface

During cell expansion, cell proliferation was evaluated by calculating the population doubling time (Dt), which is defined by:
Dt = T ln2/ln(Nf/Ni)
where “T” represents the time elapsed between determinations of the final number of cells (Nf) obtained from an initial cell number (Ni).

2.5.2. Osteogenic Commitment of Each MSC

Alizarin Red staining was carried out along culture on plastic. The coloured area of cell cultures after Alizarin red staining was quantified, in terms of percentage, using the ImageJ 1.43v software (National Institutes of Health, freely available: https://imagej.nih.gov/ij/index.html, accessed on 5 November 2020).

The cellular organisation, adhesion, and colonisation of the scaffolds were assessed at 24 h and 7 days. Each sample was subjected to fixation with phosphate buffer solution containing 4% paraformaldehyde and 2.5% glutaraldehyde for 30 min. After fixation, samples were washed 3 times with phosphate-buffered saline (PBS) for 20 min, followed by incubation for 45 min with a solution of 1% osmium tetraoxide and, finally, washed again with PBS 3 times for 10 min. The next step was the dehydration of samples by immersing them in increasing ethanol concentrations: 30%, 50%, 70%, 96%, and 100%. The final step was to introduce the samples into a critical-point device and cover them with vaporised gold. Samples were then observed and analysed by scanning electron microscopy (SEM JEM 6400, JEOL, Akishima-shi, Japan).

Early osteoblast differentiation was evaluated by measuring the alkaline phosphatase (ALP) activity, which is expressed just before the matrix mineralisation occurs, and its role as an osteogenic activity marker is established [33]. The evaluation was made using 24-well plates, and three conditions for each sample were evaluated: cell in plastic with growth medium as an internal control, and cells seeded on HA with osteogenic medium or β-TCP with osteogenic medium. Duplicates for each experimental condition were made.
Osteogenesis progression was measured between 24 h and 7 days. At these time points, media were discarded, and ceramic discs recovered, washed with PBS, stored at −20 °C, and soaked in lysis buffer (0.1 wt%, Triton-X 100, 1 mM MgCl2, 0.1 mM ZnCl2). ALP activity was determined by a colourimetric method using a commercial kit (Thermo Fisher Scientific, Cat#37629), following the manufacturer instructions, and measuring the absorbance at 405 nm.

The difference in protein components between MSCs from subchondral bone and cartilage were analysed using an iTRAQ-based comparative analysis. The results obtained revealed the identification of 1012 unique proteins in the samples. Fifty of these proteins displayed statistically significant differences (Table 2). Among those, five proteins have been previously associated with the osteoblast differentiation process: PALLD, HSPA5/GRP78, FLNA, IGFBP3, and DSTN.

3.2. Biological Features on the Plastic Surface

Cell morphology and behaviour, when grown on β-TCP and HA scaffolds, were studied by SEM at both 24 h and 7 days after culture. In all cases, cells did not show visual signs of cytotoxicity. Cells were visualised in their normal shape and size.
Regarding β-TCP, cell adhesion seemed to be faster in BM-MSCs (Figure 3C) than in ASCs and DPSCs (Figure 3A,E, respectively). After 7 days, cell overlays were observed in β-TCP discs, independently of the MSC seeded (Figure 3B,D,F). When culturing on HA, the adhesion process was similar for all MSCs (Figure 4A,C,E). On day 7, BM-MSCs and ASCs (Figure 4B–D) exhibited similar appearances, where the number of cells increased without forming layers. In contrast, DPSCs (Figure 4F) formed a multilayer covering the entire surface. Finally, all MSCs colonised the existing internal pores in both CaPs (Figure 5).

Our results indicate DPSCs as the ideal cell for bone regeneration scenarios. Within bone regeneration, DPSCs are potentially beneficial in periodontal regeneration. Supporting this, a Phase 3 clinical study using DPSCs for alveolar cleft lip and palate repair has recently been initiated (ClinicalTrials.gov Identifier: NCT03766217), and promising results regarding the use of DPSCs for periodontal regeneration have been published [50]. Moreover, a combination of the best viability obtained with β-TCP and the enhanced osteogenic capacity of HA may be appropriate. Future studies are necessary to obtain the best combination of cells and biomaterials, together with other signalling enhancers or inhibitors and different proteins that have been demonstrated in the field of dentistry and bone regeneration [51].

The study was conducted according to the guidelines of the Declaration of Helsinki, and approved by the Institutional Review Board of Comité Ético de Investigación Clínica Hospital Clínico San Carlos.

The study reports no data.

We thank Pilar Pena and Carmen Baudín from the Instituto de Cerámica y Vidrio, (ICV-CSIC) for providing the bioceramic samples used in the study. 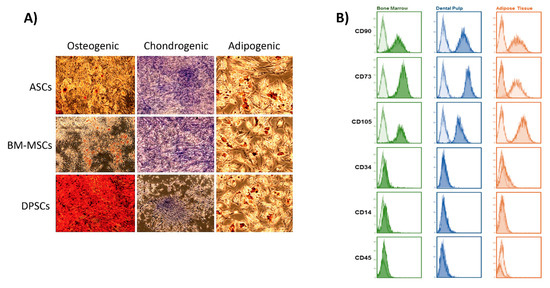 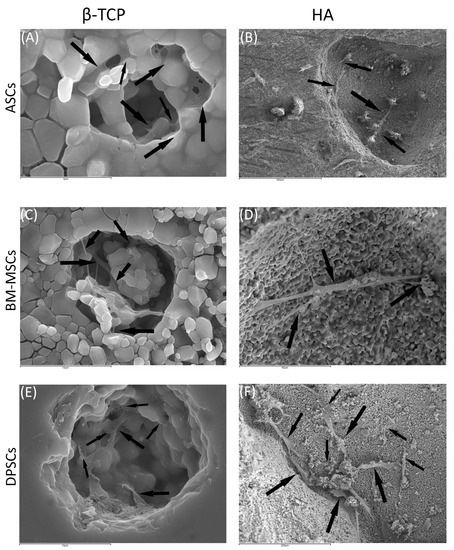 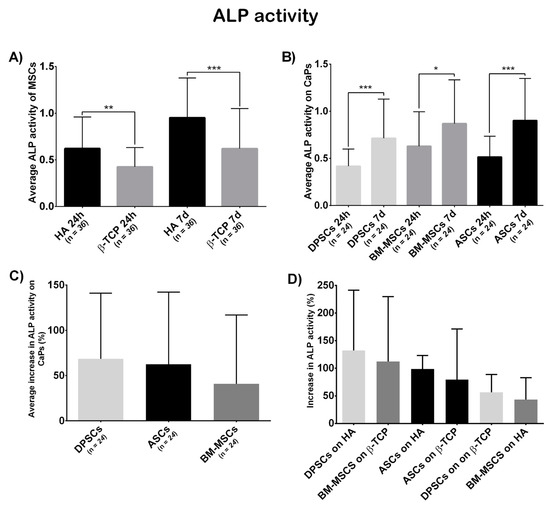