The Microenvironment’s Role in Mycosis Fungoides and Sézary Syndrome: From Progression to Therapeutic Implications
Next Article in Special Issue

Molecular and Cellular Mechanisms of Glioblastoma

Malignant glioma is one of the most lethal cancers with rapid progression, high recurrence, and poor prognosis in the central nervous system. Fatty acid-binding protein 6 (FABP6) is a bile acid carrier protein that is overexpressed in colorectal cancer. This study aimed to assess the involvement of FABP6 expression in the progression of malignant glioma. Immunohistochemical analysis revealed that FABP6 expression was higher in glioma than in normal brain tissue. After the knockdown of FABP6, a decrease in the migration and invasion abilities of glioma cells was observed. The phosphorylation of the myosin light chain was inhibited, which may be associated with migration ability. Moreover, expression levels of invasion-related proteins, matrix metalloproteinase-2 (MMP-2) and cathepsin B, were reduced. Furthermore, tube formation was inhibited in the human umbilical vein endothelial cells with a decreased concentration of vascular endothelial growth factor (VEGF) in the conditioned medium after the knockdown of FABP6. The phosphorylation of the extracellular signal-regulated kinase (ERK), c-Jun NH2-terminal kinase (JNK), and p65 were also decreased after FABP6 reduction. Finally, the bioluminescent images and immunostaining of MMP-2, cluster of differentiation 31 (CD31), and the VEGF receptor 1 (VEGFR1) revealed attenuated tumor progression in the combination of the FABP6-knocked-down and temozolomide (TMZ)-treated group in an orthotopic xenograft mouse tumor model. This is the first study that revealed the impact of FABP6 on the invasion, angiogenesis, and progression of glioma. The results of this study show that FABP6 may be a potential therapeutic target combined with TMZ for malignant gliomas. View Full-Text
Keywords: FABP6; invasion; angiogenesis; glioblastoma FABP6; invasion; angiogenesis; glioblastoma
►▼ Show Figures 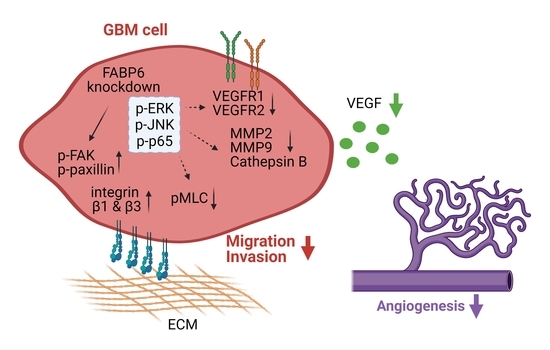 Ying Chen
Cancer biology and research.
Zoom | Orient | As Lines | As Sticks | As Cartoon | As Surface | Previous Scene | Next Scene
We use cookies on our website to ensure you get the best experience. Read more about our cookies here.
Accept
We have just recently launched a new version of our website. Help us to further improve by taking part in this short 5 minute survey here. here.
Never show this again