Plectin, a member of the plakin family, is a 500 kDa-large protein with various roles as a cytoskeletal crosslinker and signaling scaffold. Twelve isoforms of the molecule have been described, arising through alternative splicing, primarily within the N-terminal domain [1]. Plectin is a multi-faceted, highly interesting molecule since different isotypes are expressed in various cells (including keratinocytes, fibroblasts, myoblasts, and Schwann cells), fulfilling distinct functions [1]. Only four are expressed in the epidermis, namely P1, P1a, P1c, and P1f [1]. Structurally, plectin has a central α-helical coiled-coil rod domain with N- and C-terminal globular domains [2]; its role in the skin and other organs is revealed by the effects of mutations in the distinct plectin domains and isoforms [3]. In the skin, plectin is a mediator of keratinocyte mechanical stability, primarily through the connection of intermediate filaments (IFs) to hemidesmosomes (HD) [4]. Specifically, the N-terminus contains an actin-binding domain and a plakin domain with binding sites for integrin α6β4 [5,6] and collagen XVII/ BP180 [7], while the C-terminus comprises six plakin domains with binding sites for IFs, vinculin, and integrins [8,9,10]. Plectin is also a component of desmosomes and focal adhesions [11]. It has been suggested that the binding of plectin to integrin β4 prevails over that with the actin cytoskeleton, resulting in the preferential distribution of plectin in the hemidesmosomes [12], which accounts for the important role of plectin in regulating keratinocyte adhesion. It also plays a role in organizing mitochondria and nuclei within the intermediate filament network [11,13], thus being involved in the cellular metabolome [14]. Skin fragility may occur through the presence of mutations in the gene encoding for plectin, PLEC, or through the presence of autoantibodies directed against the molecule. To date, more than 100 mutations have been reported to result in different inherited disease subtypes (Human Gene Mutation Database- HGMD 2021.1). The manifestations of these specific disorders are summarized below.

Autoantibodies against plakins have been associated with autoimmune blistering disorders, specifically with paraneoplastic pemphigus (PNP), a life-threatening and rare disease, but also cases of more common bullous pemphigoid (BP) [47,48]. Due to its cytoplasmatic localization, pathogenicity, and development of anti-plectin antibodies, it is not fully understood, and the detection of plectin by blotting or immunoprecipitation is difficult due to its large size of 500 kDa [3]. Anti-plectin reactivity in BP, an acquired subepidermal blistering disease with autoreactivity to mainly hemidesmosomal proteins BP180 and/or BP230 [49], is a rare phenomenon and only rarely reported, while it is considered to occur through epitope spreading [50,51,52]. An analysis of plectin subdomains suggested the rod domain as being the immunodominant epitope [48].
Clinical hallmarks of PNP are polymorphous erosions, crusts, blisters, and/or lichenoid lesions with chronic and treatment-refractory mucositis, cheilitis, and conjunctivitis [50]. In addition, the disease shows an association with solid tumors or hematologic neoplasms (especially stomach, lung, or colon cancer, thymomas, and B-cell lymphomas) [53]. In 2001, the systemic nature of PNP was discussed by characterizing the multiorgan involvement occurring in patients, including respiratory or muscular manifestations, and the term “paraneoplastic autoimmune multiorgan syndrome” was introduced [51]. Direct immunofluorescence shows epithelial cell surface depositions of IgG and C3, but in around 50% of cases linear C3 also exists along the basement membrane zone of patients’ skin [52]. Indirect immunofluorescence on a monkey esophagus reveals IgG cell surface deposition, as occurring in pemphigus vulgaris or pemphigus foliaceus [50]. Several antigens have been associated with PNP. In the majority of patients, these include, besides plectin, the plakin family member envoplakin, desmoplakin I and II, desmogleins, desmocollins, BP230, and anti-alpha-2-macroglobulin-like 1 [54,55,56,57].

4. The Role of Plectin in Fibroblast Organization

The role of plectin in skin fibroblasts and its relevance for cutaneous disorders has remained largely unexplored. Plectin is connected to vimentin and plays a role in its network distribution within fibroblasts during the early stages of filament assembly [4]. It affects the mitosis, cell shape, polarization, and size of the cells. It also participates in forming connections between fibroblasts and their underlying extracellular matrix, while plectin-deficient fibroblasts have fewer protrusions and are rounder [58]. Their mechanical properties also seem to be impaired [59], since they are stiffer, seem to migrate less [44], and are more susceptible to stress-induced disruption [60].

5. Treatment Option for Patients with EBS-MD

Currently, no treatment options exist for plectinopathies, besides the symptomatic use of specific bandages for skin lesions and the early identification and management of disease-associated complications, e.g., surgical correction of the pyloric atresia. An elegant way to ameliorate the muscular phenotype due to the desmin-positive protein aggregates was described by Winter et al. with the use of the repurposed drug 4-phenylbutyrate [32]. An attempt to use this chaperone to rescue the aggregate formation and adhesion defects in keratinocytes and 3D skin equivalents of patients with EBS due to mutations in the keratin 5 or 14 genes, with a similar disease pathogenesis, was published recently [61]. However, treatment was challenging since the rescue of the aggregate formation was not followed by more stable adhesion structures, and the drug was toxic for keratinocytes in higher dosages [61]. Using other chaperones or small molecules as a symptom-relief therapy would be an interesting, symptom-relief treatment approach since gene therapies [62] or other curative approaches will be quite demanding to establish for such a rare disease and huge molecule.

Identifying several distinct disease subtypes linked to mutations in the PLEC gene provided insights into the role of plectin in specific organs, especially of the different isotypes. Nonetheless, there are still open questions, e.g., regarding the muscular disease and how its progression can be influenced, and the need for an explanation of the myasthenic symptoms and the urological abnormalities that only occur in some patients. Initial data on the pathogenetic background of the disease features have been unraveled but need to be further complemented to address the role of plectin as a signaling molecule. More research into understanding the disease variability in patients with the same genetic background is also needed. Finally, novel therapeutic strategies are to be expected since several mouse models are available, as well as cell lines and 3D skin equivalents, to test possible molecules.

Writing—original draft preparation, D.K.; writing—review and editing, D.K., L.T. and F.S.; funding acquisition, D.K. and F.S. All authors have read and agreed to the published version of the manuscript.

This work was supported by the Berta-Ottenstein Advanced Clinician Scientist Programme of the University of Freiburg to F.S. and D.K. and by the German Research Foundation (DFG) through SFB1160 project B03 and SFB-1479—Project ID: 441891347, as well as KI1795/2-1, the Fritz Thyssen Foundation and EB Research Partnership to D.K.

We thank Leena Bruckner-Tuderman for the continuous support, as well as the colleagues of the EB Center Freiburg for caring for the patients with plectin-associated diseases. We are grateful to Kaethe Thoma, Annegret Bedorf, and Ioannis Athanasiou for expert technical assistance. 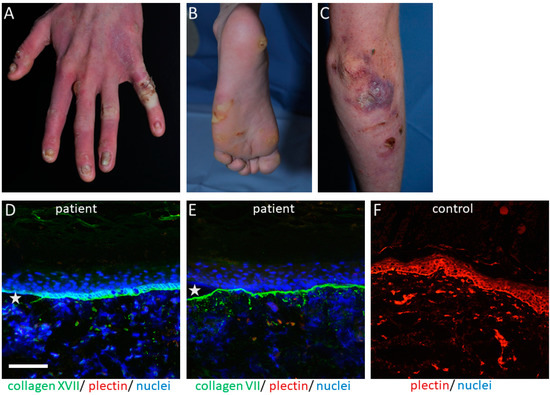 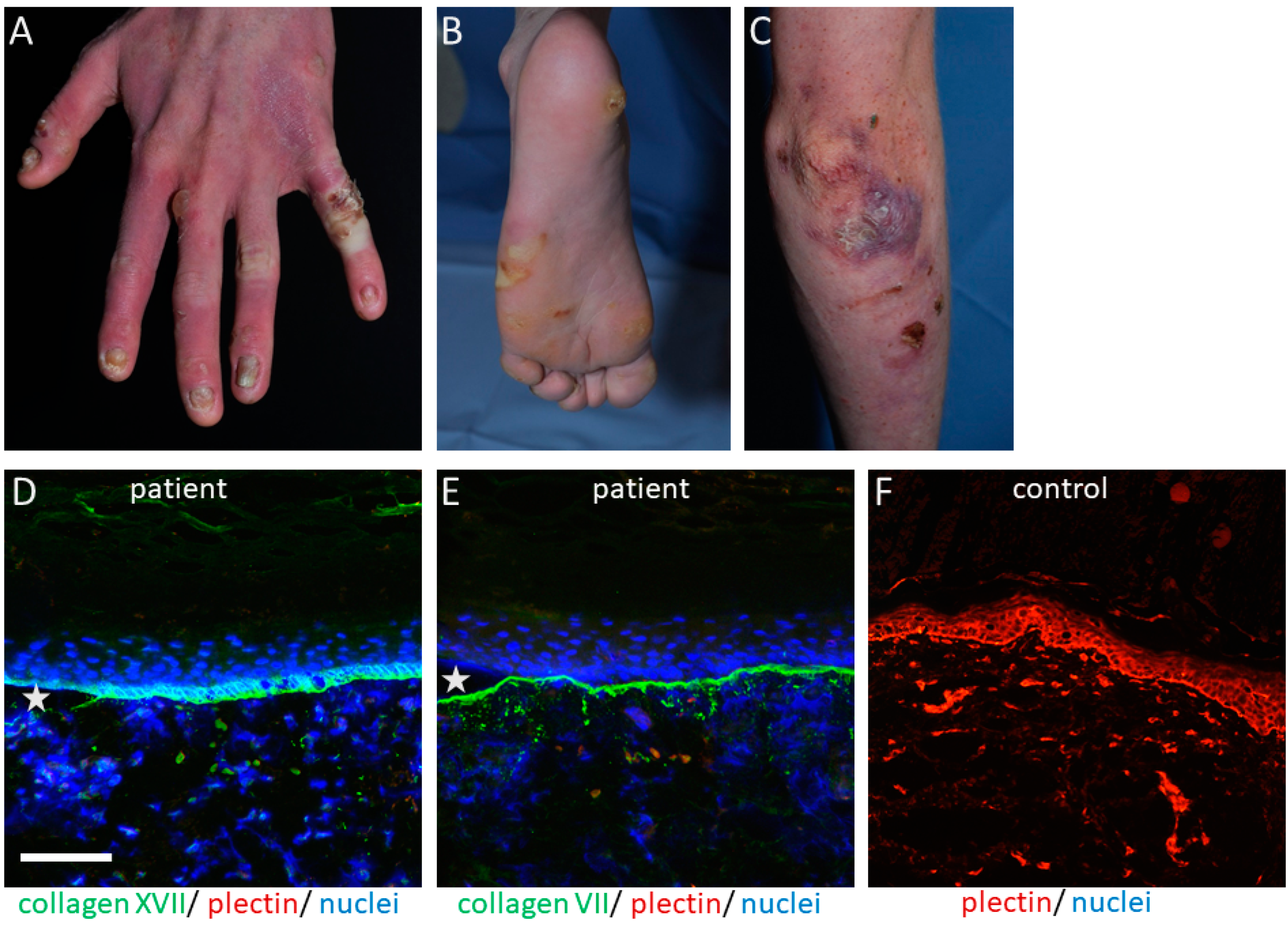