The proper regulation of RNA processing is critical for muscle development and the fine-tuning of contractile ability among muscle fiber-types. RNA binding proteins (RBPs) regulate the diverse steps in RNA processing, including alternative splicing, which generates fiber-type specific isoforms of structural proteins that confer contractile sarcomeres with distinct biomechanical properties. Alternative splicing is disrupted in muscle diseases such as myotonic dystrophy and dilated cardiomyopathy and is altered after intense exercise as well as with aging. It is therefore important to understand splicing and RBP function, but currently, only a small fraction of the hundreds of annotated RBPs expressed in muscle have been characterized. Here, we demonstrate the utility of Drosophila as a genetic model system to investigate basic developmental mechanisms of RBP function in myogenesis. We find that RBPs exhibit dynamic temporal and fiber-type specific expression patterns in mRNA-Seq data and display muscle-specific phenotypes. We performed knockdown with 105 RNAi hairpins targeting 35 RBPs and report associated lethality, flight, myofiber and sarcomere defects, including flight muscle phenotypes for Doa, Rm62, mub, mbl, sbr, and clu. Knockdown phenotypes of spliceosome components, as highlighted by phenotypes for A-complex components SF1 and Hrb87F (hnRNPA1), revealed level- and temporal-dependent myofibril defects. We further show that splicing mediated by SF1 and Hrb87F is necessary for Z-disc stability and proper myofibril development, and strong knockdown of either gene results in impaired localization of kettin to the Z-disc. Our results expand the number of RBPs with a described phenotype in muscle and underscore the diversity in myofibril and transcriptomic phenotypes associated with splicing defects. Drosophila is thus a powerful model to gain disease-relevant insight into cellular and molecular phenotypes observed when expression levels of splicing factors, spliceosome components and splicing dynamics are altered. View Full-Text
Keywords: RNA binding proteins; SF1; Hrb87F; Bru1; Drosophila; flight muscle; RNAi; splicing RNA binding proteins; SF1; Hrb87F; Bru1; Drosophila; flight muscle; RNAi; splicing
►▼ Show Figures 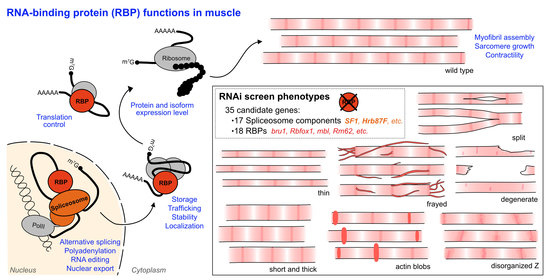