Towards a Functional Cure for Diabetes Using Stem Cell-Derived Beta Cells: Are We There Yet?
Next Article in Special Issue

White matter interstitial neurons (WMIN) are a subset of cortical neurons located in the subcortical white matter. Although they were fist described over 150 years ago, they are still largely unexplored and often considered a small, functionally insignificant neuronal population. WMIN are adult remnants of neurons located in the transient fetal subplate zone (SP). Following development, some of the SP neurons undergo apoptosis, and the remaining neurons are incorporated in the adult white matter as WMIN. In the adult human brain, WMIN are quite a large population of neurons comprising at least 3% of all cortical neurons (between 600 and 1100 million neurons). They include many of the morphological neuronal types that can be found in the overlying cerebral cortex. Furthermore, the phenotypic and molecular diversity of WMIN is similar to that of the overlying cortical neurons, expressing many glutamatergic and GABAergic biomarkers. WMIN are often considered a functionally unimportant subset of neurons. However, upon closer inspection of the scientific literature, it has been shown that WMIN are integrated in the cortical circuitry and that they exhibit diverse electrophysiological properties, send and receive axons from the cortex, and have active synaptic contacts. Based on these data, we are able to enumerate some of the potential WMIN roles, such as the control of the cerebral blood flow, sleep regulation, and the control of information flow through the cerebral cortex. Also, there is a number of studies indicating the involvement of WMIN in the pathophysiology of many brain disorders such as epilepsy, schizophrenia, Alzheimer’s disease, etc. All of these data indicate that WMIN are a large population with an important function in the adult brain. Further investigation of WMIN could provide us with novel data crucial for an improved elucidation of the pathophysiology of many brain disorders. In this review, we provide an overview of the current WMIN literature, with an emphasis on studies conducted on the human brain. View Full-Text
Keywords: WMIN; subplate; human brain; stereology; epilepsy; schizophrenia; cerebral cortex WMIN; subplate; human brain; stereology; epilepsy; schizophrenia; cerebral cortex
►▼ Show Figures 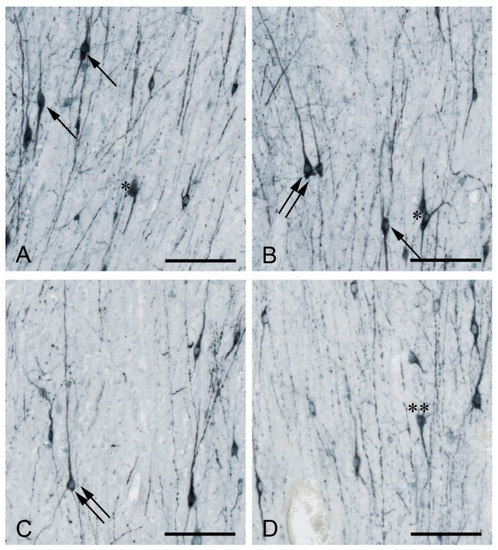