Cytosolic 5′-Nucleotidase II Is a Sensor of Energy Charge and Oxidative Stress: A Possible Function as Metabolic Regulator
Previous Article in Special Issue

Motor exercise, such as sport or musical activities, helps with a plethora of diseases by modulating brain functions in neocortical and subcortical regions, resulting in behavioural changes related to mood regulation, well-being, memory, and even cognitive preservation in aging and neurodegenerative diseases. Although evidence is accumulating on the systemic neural mechanisms mediating these brain effects, the specific mechanisms by which exercise acts upon the cellular level are still under investigation. This is particularly the case for music training, a much less studied instance of motor exercise than sport. With regards to sport, consistent neurobiological research has focused on the brain-derived neurotrophic factor (BDNF), an essential player in the central nervous system. BDNF stimulates the growth and differentiation of neurons and synapses. It thrives in the hippocampus, the cortex, and the basal forebrain, which are the areas vital for memory, learning, and higher cognitive functions. Animal models and neurocognitive experiments on human athletes converge in demonstrating that physical exercise reliably boosts BDNF levels. In this review, we highlight comparable early findings obtained with animal models and elderly humans exposed to musical stimulation, showing how perceptual exposure to music might affect BDNF release, similar to what has been observed for sport. We subsequently propose a novel hypothesis that relates the neuroplastic changes in the human brains after musical training to genetically- and exercise-driven BDNF levels. View Full-Text
Keywords: music; BDNF; BDNF gene music; BDNF; BDNF gene
►▼ Show Figures 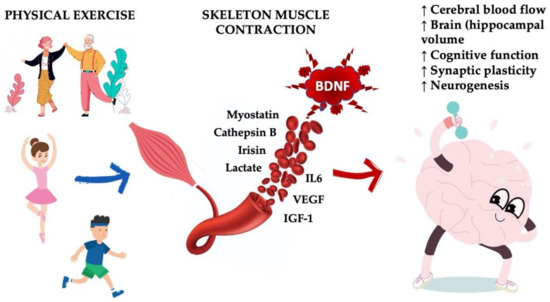