The tung tree, Vernicia fordii (Herbert Kenneth Airy Shaw), is a woody species native to South-East Asia (from Central and Southwest China to North Vietnam), which is also cultivated in China for the production of industrial oil. It is listed as a Category II invasive plant species in Florida, USA. During the introduction period of the tung tree from China to other countries in the last century, its low invasion feature led to its successful establishment in only a few countries. However, the genetic consideration for the population in its widespread native environment remains lacking. In this study, a set of 95 accessions covering most of the tung tree distribution areas in China were collected. Fifty simple sequence repeat (SSR) primer pairs were selected for the genotyping of the germplasm. Population genetics analysis indicated a medium level of genetic variation within the collected samples. The genetic diversity of the tung tree from the main production region was obviously higher than those from the marginal regions. A significant genetic differentiation occurred between the two regions, as well as among the 12 regional groups of administration. The dendrogram based on Nei’s gene diversity showed that the clustering pattern for the germplasm collections basically coincided with their geographic distribution. In their native environment, human activities have had a significant impact on the gene flow via seed movement among the production areas of the tung tree in history. This study will be helpful for molecular breeding and germplasm preservation of the tung tree, and for understanding the tung tree as a biodiesel plant species with a low invasion risk when introduced into foreign countries. View Full-Text
Keywords: genetic diversity; woody plant; tung tree (Vernicia fordii); geographic differentiation; simple sequence repeat (SSR) marker; invasion risk genetic diversity; woody plant; tung tree (Vernicia fordii); geographic differentiation; simple sequence repeat (SSR) marker; invasion risk
►▼ Show Figures 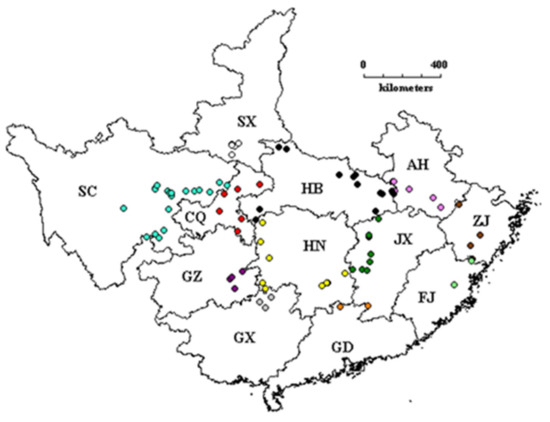