Perennial polyculture cropping systems are a novel agroecological approach used to mirror some of the ecological benefits provided by native perennial ecosystems including increased carbon and nitrogen storage, more stable soils, and reduced anthropogenic input. Plants selected for perennial agroecosystems are often closely related to native perennials known to be highly dependent on microbiome biota, such as arbuscular mycorrhizal (AM) fungi. However, most plantings take place in highly disturbed soils where tillage and chemical use may have rendered the AM fungal communities less abundant and ineffective. Studies of mycorrhizal amendments include inoculation densities of 2–10,000 kg of inocula per hectare. These studies report variable results that may depend on inocula volume, composition, or nativeness. Here, we test the response of 19 crop plant species to a native mycorrhizal fungal community in a greenhouse and field experiment. In our field experiment, we chose eight different densities of AM fungal amendment, ranging from 0 to 8192 kg/hectare, representing conventional agricultural practices (no AM fungi addition), commercial product density recommendations, and higher densities more typical of past scientific investigation. We found that plant species that benefited from native mycorrhizal inocula in the greenhouse also benefited from inoculation in the field polyculture planting. However, the densities of mycorrhizal inocula suggested on commercial mycorrhizal products were ineffective, and higher concentrations were required to detect significant benefit plant growth and survival. These data suggest that higher concentrations of mycorrhizal amendment or perhaps alternative distribution methods may be required to utilize native mycorrhizal amendment in agroecology systems. View Full-Text
Keywords: arbuscular mycorrhizal fungi; inoculation density; perennial agriculture; plant microbiome arbuscular mycorrhizal fungi; inoculation density; perennial agriculture; plant microbiome
►▼ Show Figures 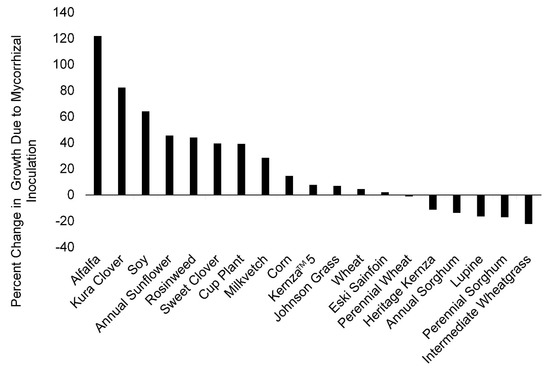