Wx Gene in Hordeum chilense: Chromosomal Location and Characterisation of the Allelic Variation in the Two Main Ecotypes of the Species

Starch, as the main grain component, has great importance in wheat quality, with the ratio between the two formed polymers, amylose and amylopectin, determining the starch properties. Granule-bound starch synthase I (GBSSI), or waxy protein, encoded by the Wx gene is the sole enzyme responsible for amylose synthesis. The current study evaluated the variability in Wx genes in two representative lines of Hordeum chilense Roem. et Schult., a wild barley species that was used in the development of tritordeum (×Tritordeum Ascherson et Graebner). Two novel alleles, Wx-Hch1a and Wx-Hch1b, were detected in this material. Molecular characterizations of these alleles revealed that the gene is more similar to the Wx gene of barley than that of wheat, which was confirmed by phylogenetic studies. However, the enzymatic function should be similar in all species, and, consequently, the variation present in H. chilense could be utilized in wheat breeding by using tritordeum as a bridge species. View Full-Text
Keywords: starch; tritordeum; waxy proteins; wheat quality; wild barley starch; tritordeum; waxy proteins; wheat quality; wild barley
►▼ Show Figures 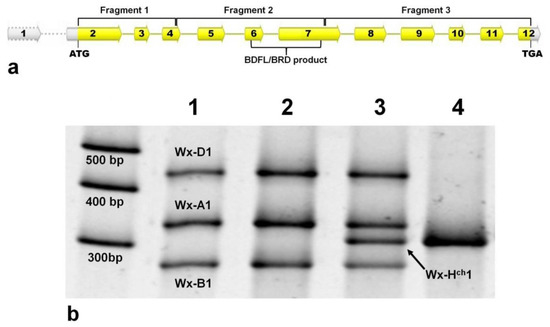 
Alvarez, Juan B., Laura Castellano, Rocío Recio, and Adoración Cabrera. 2019. "Wx Gene in Hordeum chilense: Chromosomal Location and Characterisation of the Allelic Variation in the Two Main Ecotypes of the Species" Agronomy 9, no. 5: 261. https://doi.org/10.3390/agronomy9050261