Grassland Management Influences the Response of Soil Respiration to Drought

The CenW ecosystem model simulates carbon, water, and nitrogen cycles following ecophysiological processes and management practices on a daily basis. We tested and evaluated the model using five years eddy covariance measurements from two adjacent but differently managed grasslands in France. The data were used to independently parameterize CenW for the two grassland sites. Very good agreements, i.e., high model efficiencies and correlations, between observed and modeled fluxes were achieved. We showed that the CenW model captured day-to-day, seasonal, and interannual variability observed in measured CO2 and water fluxes. We also showed that following typical management practices (i.e., mowing and grazing), carbon gain was severely curtailed through a sharp and severe reduction in photosynthesizing biomass. We also identified large model/data discrepancies for carbon fluxes during grazing events caused by the noncapture by the eddy covariance system of large respiratory losses of C from dairy cows when they were present in the paddocks. The missing component of grazing animal respiration in the net carbon budget of the grazed grassland can be quantitatively important and can turn sites from being C sinks to being neutral or C sources. It means that extra care is needed in the processing of eddy covariance data from grazed pastures to correctly calculate their annual CO2 balances and carbon budgets. View Full-Text
Keywords: grassland; eddy covariance; carbon cycling; grazing; mowing; CenW model grassland; eddy covariance; carbon cycling; grazing; mowing; CenW model
►▼ Show Figures 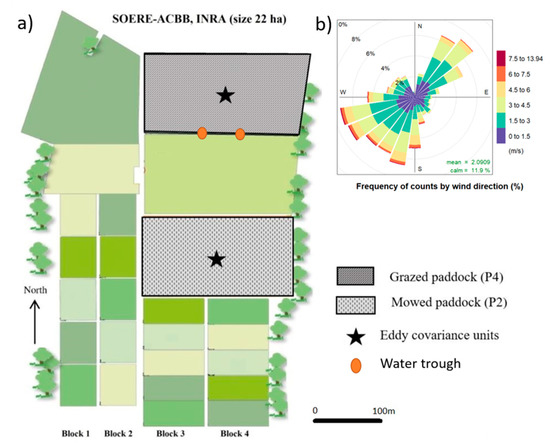