Effect of Selenium Enrichment and Type of Application on Yield, Functional Quality and Mineral Composition of Curly Endive Grown in a Hydroponic System
Previous Article in Journal

Effects of Temperature and Grafting on Yield, Nutrient Uptake, and Water Use Efficiency of a Hydroponic Sweet Pepper Crop

In areas characterized by mild winter climate, pepper is frequently cultivated in unheated greenhouses in which the temperature during the winter may drop to suboptimal levels. Under low temperature (LT) conditions, the uptake of nutrients may be altered in a different manner than that of the water and thus their uptake ratio, known as uptake concentration, may be different than in greenhouses with standard temperature (ST) conditions. In the present study, pepper plants of the cultivars “Sammy” and “Orangery”, self-grafted or grafted onto two commercial rootstocks (“Robusto” and “Terrano”), were cultivated in a greenhouse under either ST or LT temperature conditions. The aim of the study was to test the impact of grafting and greenhouse temperature on total yield, water use efficiency, and nutrient uptake. The LT regime reduced the yield by about 50% in “Sammy” and 33% in “Orangery”, irrespective of the grafting combination. Grafting of “Sammy” onto both “Robusto” and “Terrano” increased the total fruit yield by 39% and 34% compared with the self-grafted control, while grafting of “Orangery” increased the yield only when the rootstock was “Terrano”. The yield increase resulted exclusively from enhancement of the fruit number per plant. Both the water consumption and the water use efficiency were negatively affected by the LT regime, however the temperature effect interacted with the rootstock/scion combination. The LT increased the uptake concentrations (UC) of K, Ca, Mg, N, and Mn, while it decreased strongly that of P and slightly the UC of Fe and Zn. The UC of K and Mg were influenced by the rootstock/scion combination, however this effect interacted with the temperature regime. In contrast, the Ca, N, and P concentrations were not influenced by the grafting combination. The results of the present study show that the impact of grafting on yield and nutrient uptake in pepper depend not merely on the rootstock genotype, however on the rootstock/scion combination. View Full-Text
Keywords: abiotic stress; Capsicum annuum L.; calcium; rootstock; uptake concentrations; soilless culture abiotic stress; Capsicum annuum L.; calcium; rootstock; uptake concentrations; soilless culture
►▼ Show Figures 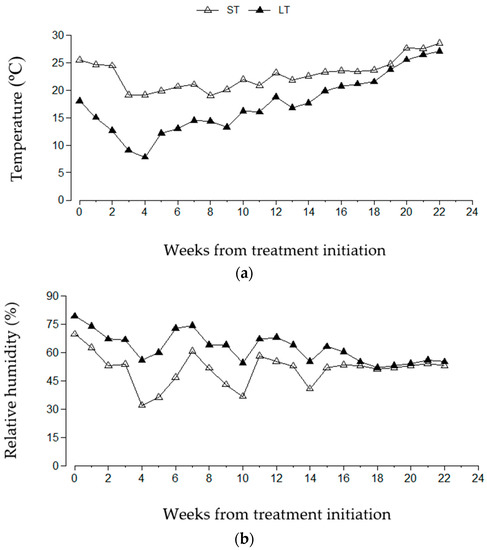