Effects of Temperature and Grafting on Yield, Nutrient Uptake, and Water Use Efficiency of a Hydroponic Sweet Pepper Crop

Deficiencies in phosphorus (P), an essential factor for plant growth and aided phytostabilization, are commonly observed in soil, especially near mining areas. The objective of this study was to compare the effect of P-based fertilizer types on arsenic (As) extractability and phytotoxicity in As-contaminated soil after stabilizer treatment. Different treatments with respect to the P-releasing characteristics were applied to soil to determine As mobility and phytotoxicity in P-based fertilizers, with bone meal as a slow-releasing P fertilizer and fused superphosphate as a fast-releasing P fertilizer. In addition, P fertilizers were used to enhance plant growth, and two types of iron (Fe)-based stabilizers (steel slang and acid mine drainage sludge) were also used to reduce As mobility in As-contaminated soil under lab-scale conditions. A water-soluble extraction was conducted to determine As and P extractability. A phytotoxicity test using bok choy (Brassica campestris L. ssp. chinensis Jusl.) was performed to assess the elongation and accumulation of As and P. Within a single treatment, the As stabilization was higher in steel slag (84%) than in acid mine drainage sludge (27%), and the P supply effect was higher in fused superphosphate (24740%) than in bone meal (160%) compared to the control. However, a large dose of fused superphosphate (2%) increased not only the water-soluble P, but also the water-soluble As, and consequently, increased As uptake by bok choy roots, leading to phytotoxicity. In combined treatments, the tendency towards change was similar to that of the single treatment, but the degree of change was decreased compared to the single treatment, thereby decreasing the risk of phytotoxicity. In particular, the toxicity observed in the fused superphosphate treatments did not appear in the bone meal treatment, but rather the growth enhancement effect appeared. These results indicate that the simultaneous application of bone meal and stabilizers might be proposed and could effectively increase plant growth via the stabilization of As and supplementation with P over the long term. View Full-Text
Keywords: arsenic; bok choy; bone meal; gentle soil remediation options; phytotoxicity arsenic; bok choy; bone meal; gentle soil remediation options; phytotoxicity
►▼ Show Figures 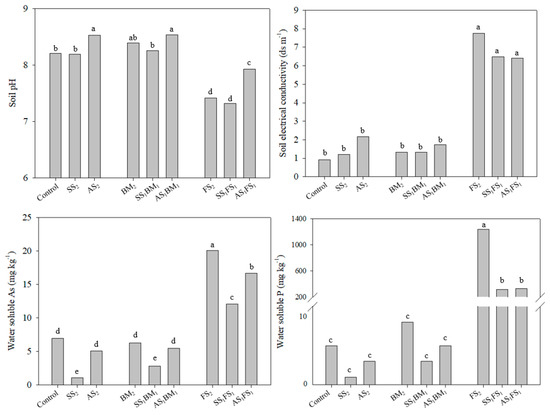