An Assessment of the Spatial and Temporal Distribution of Soil Salinity in Combination with Field and Satellite Data: A Case Study in Sujawal District

Soil salinization is a serious environmental issue that significantly influences crop yield and soil fertility, especially in coastal areas. Numerous studies have been conducted on the salinity status in Pakistan. Information about the geospatial and temporal distribution of salinity in the Sujawal district is still lacking. The present study examines the soil salinity status and the impact of seawater intrusion in the entire district from 1990 to 2017 using field and remote sensing (RS) data. In addition, 210 soil samples at different depths (0–20, 20–40, and 40–60 cm) were collected from randomly selected locations for lab measurements of physiochemical properties. The results showed that the soil texture classes were mainly fine to medium particles. The samples collected at the 0–20 cm depth were mostly dominated by three textural classes of soil: clay at 19.5%, clay loam at 25.6%, and loam at 32.9%. The electrical conductivity (EC) of 65.7% soil samples collected from the top layer exceeded the normal range. The quantitative results indicated that the exchangeable sodium percentage (ESP) ranged between 1.38 and 64.58, and 72.2% of the top layer soil samples had ESP >15, while 81.5% of soil samples were in the normal range of soil pH. Furthermore, the results indicated that the vegetation decreased by 8.6% from 1990 to 2017, while barren land and water bodies increased significantly, by approximately 4.4% and 4.2%, respectively. The extreme and high salinity classes were characterized by high contents of soluble salt on the surface in the Jati and Shah Bandar subdistricts. In addition, the soil EC values at the 0–20 cm depth were significantly correlated with the salinity index (S1). Therefore, it was concluded that more than 50% of the top layer of soil was affected by salinity due to seawater intrusion, low rainfall, climate change, and erratic river flow. It is suggested that remote sensing (RS) data are more suitable for the detection of the soil salinity status of a region and impose a lower cost compared to other conventional approaches. However, this study could provide significant knowledge to land managers, policymakers, and government officials to allow them to take action to implement salinity control measures in the study area. View Full-Text
Keywords: soil salinity; field surveys; remote sensing; salinity indices; Sujawal district soil salinity; field surveys; remote sensing; salinity indices; Sujawal district
►▼ Show Figures 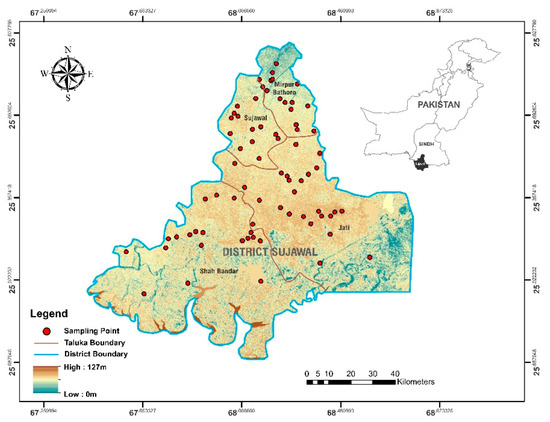