Rice Blast: A Disease with Implications for Global Food Security

Soil biota consists of a wide variety of living organisms, both visible and microscopic; from plants, insects, amphibians, reptiles and mammals, to bacteria, fungi and nematodes. Farmlands are not an exception. Biodiversity on farmland is a precondition for sustainable farming [1]. Among soil organisms, nematodes play important roles in soil ecosystem function, such as nutrient cycling, decomposition and disease suppression [2]. Feeding activities of free-living nematodes generally lead to an increase in nutrient availability as a result of increased soil microbial activity and excretion of excess ingested nutrients [3], especially nitrogen mineralization [4,5]. Free-living nematodes also play significant roles in regulating soilborne pathogens (bacteria, fungi and plant-parasitic nematodes) [6]. Thus, nematode diversity in soil is a good indicator of soil health [7] and associated with sustainable agriculture [8]. Plant-parasitic nematodes, on the other hand, weaken plants, and reduce the yield and quality of harvests [9].
In order to enhance farmland productivity, fumigants, such as methyl bromide, chloropicrin and 1,3-dichloropropene, and also nematicides including organophosphates and carbamates have been widely used to suppress plant-parasitic nematodes in farmlands [10]. Because of its ozone-depleting property, methyl bromide phased out under the Montreal Protocol [11]. Also, some fumigants and nematicides have been banned or restricted in some countries due to their toxicity to non-target organisms and impact on the environment. For example, a nematicide, carbofuran reduced both total nematode abundance and the number of taxa [12], while another nematicide, aldicarb, also decreased abundances of non-target free-living nematodes [13,14,15]. Effective chemical nematicides may be potentially harmful to non-target free-living nematodes because of their biocidal activity. Further, imicyafos, another widely used nematicide, did not affect the total numbers of non-target nematodes, but it altered overall nematode fauna evaluated by PCR-DGGE (denaturing gradient gel electrophoresis) [16]. Thus, nematicides with minimum impact on non-target free-living nematodes are desired for promoting farmland productivity by suppressing target plant-parasitic nematodes while keeping free-living nematodes’ abundance and diversity.
Environmental conditions after nematicide application, such as temperature, soil moisture and pH, may affect the dissipation of nematicides [17,18]. While rapid dissipation is expected for nematicides, prolonged uses of the same nematicide has been a new problem for controlling plant-parasitic nematodes. This may be due to enhanced biodegradation by soil microbes [19]. Such phenomena have been reported in several nematicides (e.g., aldicarb, cadusafos, oxamyl and fosthiazate) [20,21,22,23]. Therefore, a variety of nematicides with different modes of action may be of great demand to avoid potential biodegradation of chemicals due to successive application of a single nematicide [24].
Fluensulfone (5-chloro-2-(3,4,4-trifluorobut-3-enylsulfonyl)-1,3-thiazole; CAS number 318290-98-1) is a heterocyclic fluoroalkenyl sulfone nematicide and its mode of action is different from that of the anticholinesterases and macrocyclic lactones [25]. The target nematodes cover three important plant-parasitic nematode groups, root-knot, root-lesion and cyst nematodes [9]. Efficacies of fluensulfone against the root-knot nematodes Meloidogyne incognita and M. javanica were shown in different experimental settings, including pot and field experiments using tomato and pepper and in a tomato-cucumber double cropping system, as well as in lima bean fields [26,27,28,29,30,31]. Fluensulfone was shown to be effective against Pratylenchus spp. (root-lesion nematodes) in pot experiments [32], so was against the potato cyst nematode, Globodera pallida [33] and sting nematode, Belonolaimus longicaudatus [34]. Fluensulfone also showed its efficacy on Nacobbus aberrans in pot experiments using tomato and cucumber [35]. Further, fluensulfone has less toxicity to Caenorhabditis elegans, a free-living nematode, than to M. javanica [25]. Recently, it was reported that fluensulfone had less impact to non-target nematodes in turfgrass, while its damage control of ground cover was limited [36]. For field crops, fluensulfone’s efficacy on other free-living nematodes as well as M. incognita has not been tested until now.
In this study, we used tomato and sweet potato crops in fields to test the efficacy of fluensulfone on nematodes, since tomato and sweet potato are major hosts of Meloidogyne sp. [37,38], which reduced their yields by 20.6% and 10.2%, respectively [9]. In Japan, both tomato and sweet potato are very important agricultural products and their total productions in 2017 were ca 2.2 billion and ca 0.9 billion dollars, respectively [e-Stat: Portal Site of Official Statistics of Japan website (https://www.e-stat.go.jp/)].
Our hypothesis was that fluensulfone may be an efficient means to control root-knot nematodes in tomato and sweet potato. We further hypothesized that fluensulfone might not adversely affect the overall non-target free-living nematode fauna and population density. Therefore, the objectives of the current study were to confirm the efficacy of fluensulfone for root-knot nematodes and to explore the effects of fluensulfone on a broad range of non-target free-living nematodes, which are key players in sustainable crop production [7]. This study will provide in-depth insights into proper use of nematicides for farmers and researchers in the perspective not only from the efficacy on plant-parasitic nematodes but also from the impact on non-target free-living nematodes.

The experimental plots of Ushiku I were treated with two nematicides, fluensulfone (in a granular form, 2% active ingredient; a.i.) supplied by ADAMA JAPAN K.K. (Tokyo, Japan) and fosthiazate (Nemathorin in a granular form, 1.5% a.i., Ishihara Sangyo Kaisha, Tokyo, Japan), and a fumigant (97.5% of 1,3-dichloropropene, DCP: Telone II in a liquid form, Dow AgroSciences, Tokyo, Japan) 2 weeks before crop planting, in triplicate. The experimental plots of Ushiku II, Miyazaki, and Chiba were treated with the two nematicides, fluensulfone and fosthiazate, separately just before crop planting, in triplicates. For each individual experiment, the surface 15 to 20 cm soil was tilled and each chemical was incorporated. Non-treated controls were also prepared in triplicates and each treatment was randomly arranged. Fluensulfone, fosthiazate and DCP were applied at 200 kg ha−1 in granular form (4 kg a.i. ha−1), 200 kg ha−1 of Nemathorin (3 kg a.i. ha−1), and 150 L ha−1 of Telone II (177 kg a.i. ha−1), respectively. The plots applied with DCP after tillage were covered in plastic mulch until planting tomato seedlings.

Nematodes were extracted in triplicate from 20 g subsample of each well mixed soil sample to evaluate nematode fauna using the Baermann funnel extraction method (room temperature, 72 h), and counted under a stereomicroscope (BX53, Olympus, Tokyo, Japan). The soils were confirmed to be infested by M. incognita by identifying the extracted root-knot nematodes with PCR-RFLP (restriction fragment length polymorphism) [39]. Occasional occurrences of Pratylenchus penetrans, Paratylenchus sp., Trichodorus sp. and Xiphinema sp. were observed, but not considered in this study because of their relatively low populations. Free-living nematodes were counted in total and classified separately for the first 100 individuals or all, if total numbers were less than 100, based on their morphological characters [40] and general feeding habits [41]. The classification of free-living nematodes in the current study covered Acrobeloides, Cephalobus, Rhabditis, other genus in the Rhabditidae family, and the other bacterial feeders. The other feeding types including fungal feeders (Aphelenchus, Aphelenchoides, Filenchus and Ditylenchus) and mostly omnivorous nematodes in the Dorylaimida order were also recorded. The proportion of each nematode classification to the total free-living nematodes was shown in the Supplementary Table S1, in which the proportion of Acrobeloides and that of frugivorous and omnivorous nematodes, among other nematode groups, showed noticeable fluctuation after chemical treatments. Therefore, we further statistically analyzed the proportion of Acrobeloides and that of fungivorous and omnivorous nematodes.

Ten out of 18 (Ushiku I and Ushiku II), 22 (Miyazaki) tomato plants, and 17 sweet potato plants (Chiba) in each plot were randomly selected to evaluate root galling. Nematode damage to roots was assessed per plant using a 5-scale index system (0 = no galling, 4 = abundant galling) and was converted into disease index expressed as 0–100 based on the formula: disease index = (the number of infested plants in each index × each index scale)/(4 × total number of plants) [42,43].

The Shannon-Wiener index (H’) was used to evaluate diversity of soil free-living nematode fauna and the Simpson’s D was applied to assess dominance of abundant taxa [44]. Species richness (Margalef index) and evenness J’ was evaluated using genus and family levels as taxa classification [44]. Maturity index [45,46], maturity index (colonizer-persister (cp) value 2–5) [47] and maturity index (Cephalobidae adjusted; Cephalobidae’s cp adjusted from 2 to 1 to reflect the fact that Cephalobidae can be the first colonizer in the experimental fields) were also used to gauge the condition of the soil ecosystem. All the indices were calculated primarily following Yeates and Bongers [7]. Values of each indicator before chemical application were not significantly different (p > 0.183) among treatments. At first, the statistical difference of the values in each experiment was analyzed by ANOVA followed by Dunnett’s tests, and the analyses were conducted using Microsoft Excel add-in software Statcel (3rd ed.; OMS, Tokyo, Japan). Then, results from the field experiments (combined, excluding the DCP treatment) were also analyzed in R v.3.6.1 [48] using linear mixed-effects models (LMM; lmer library of lme4 package; [49]) for all variables (square-rooted). Chemical treatment was fitted as the categorical explanatory variable and experiment (different soils, hosts and seasons) was treated as a random effect to control for variation in disease index, species abundance, nematode diversity and maturity indices among experiments. To analyze the response of subgroups within nematode fauna a principal component analysis (PCA) was carried out using 9 to 11 nematode species or groups that were present in the samples. PCAs were conducted using Microsoft Excel add-in software Mulcel (OMS, Tokyo, Japan).

At 1-month after planting, the number of free-living nematodes was significantly (p < 0.05) lower in DCP than that in the non-treated control, but not in the other treatments (Figure 2A). At 2-months after planting, the free-living nematode numbers were similar among treatments (Figure 2B). A mixed-effect model at 1- and 2-months among the four experiments did not show significant (p > 0.082) difference among treatments.

The result of PCA analysis showed that DCP in Ushiku I, and fosthiazate in Ushiku II and Chiba after chemical treatments were seen in the dotted circles (Figure 7), which were remote from the other treatments. Among the loading factors (LF) for Ushiku I, Ushiku II and Chiba, the values of Acrobeloides sp. were over 0.98, while most of the other LF values were negative. Rhabditis sp. was the most important LF value (0.99) for Miyazaki (Table 1).

As a conclusion, fluensulfone was an effective nematicide against galling on tomato and sweet potato roots by root-knot nematodes with very limited impact on the soil free-living nematode fauna. This is the first report of fluensulfone’s nematicidal activity against M. incognita, but less activity against non-target free-living nematode fauna in field crops.

For the details of each experiment, the following is available online at https://www.mdpi.com/2073-4395/9/12/853/s1, Table S1: Proportion of each nematode classification to the total free-living nematodes. 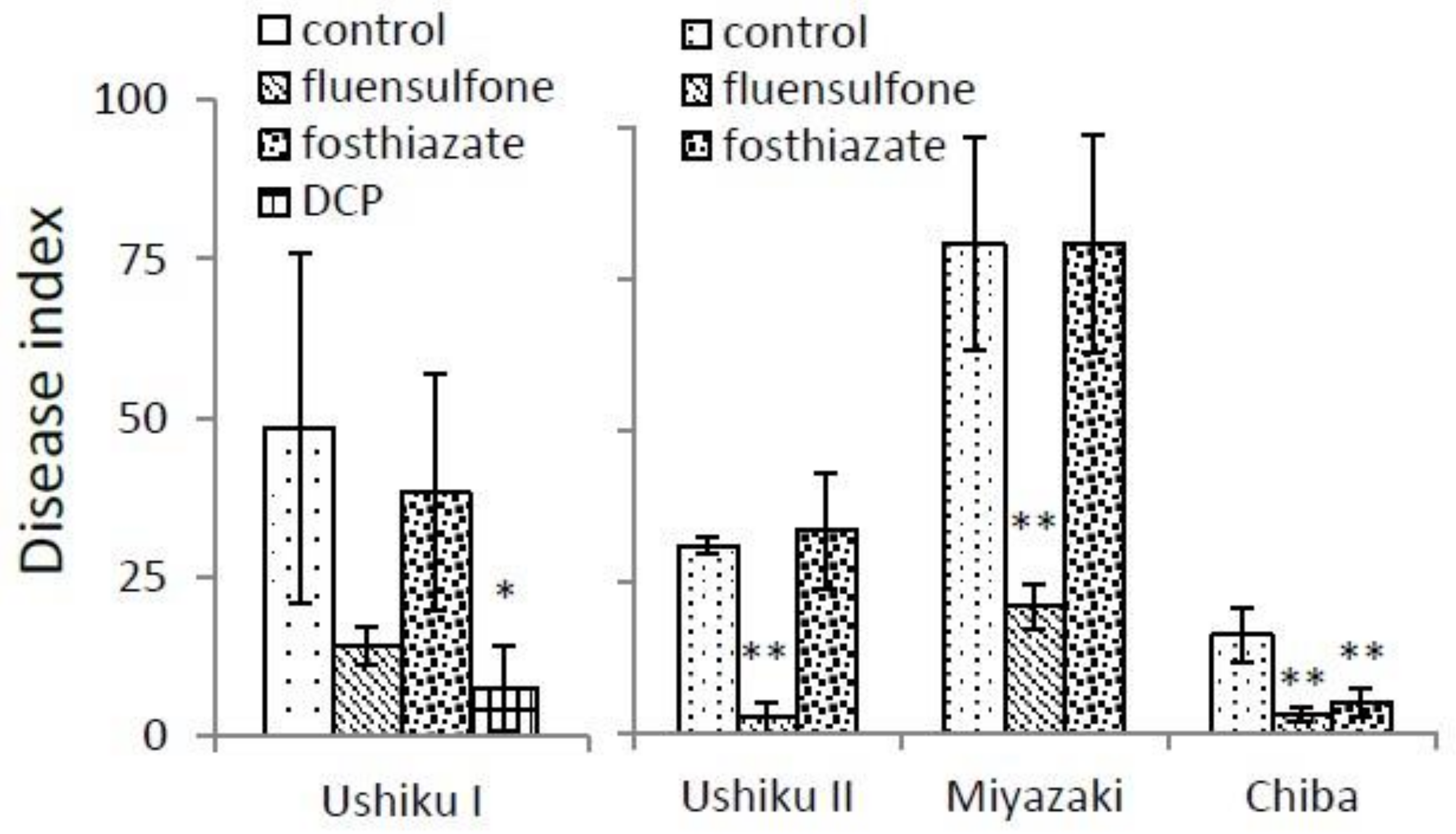 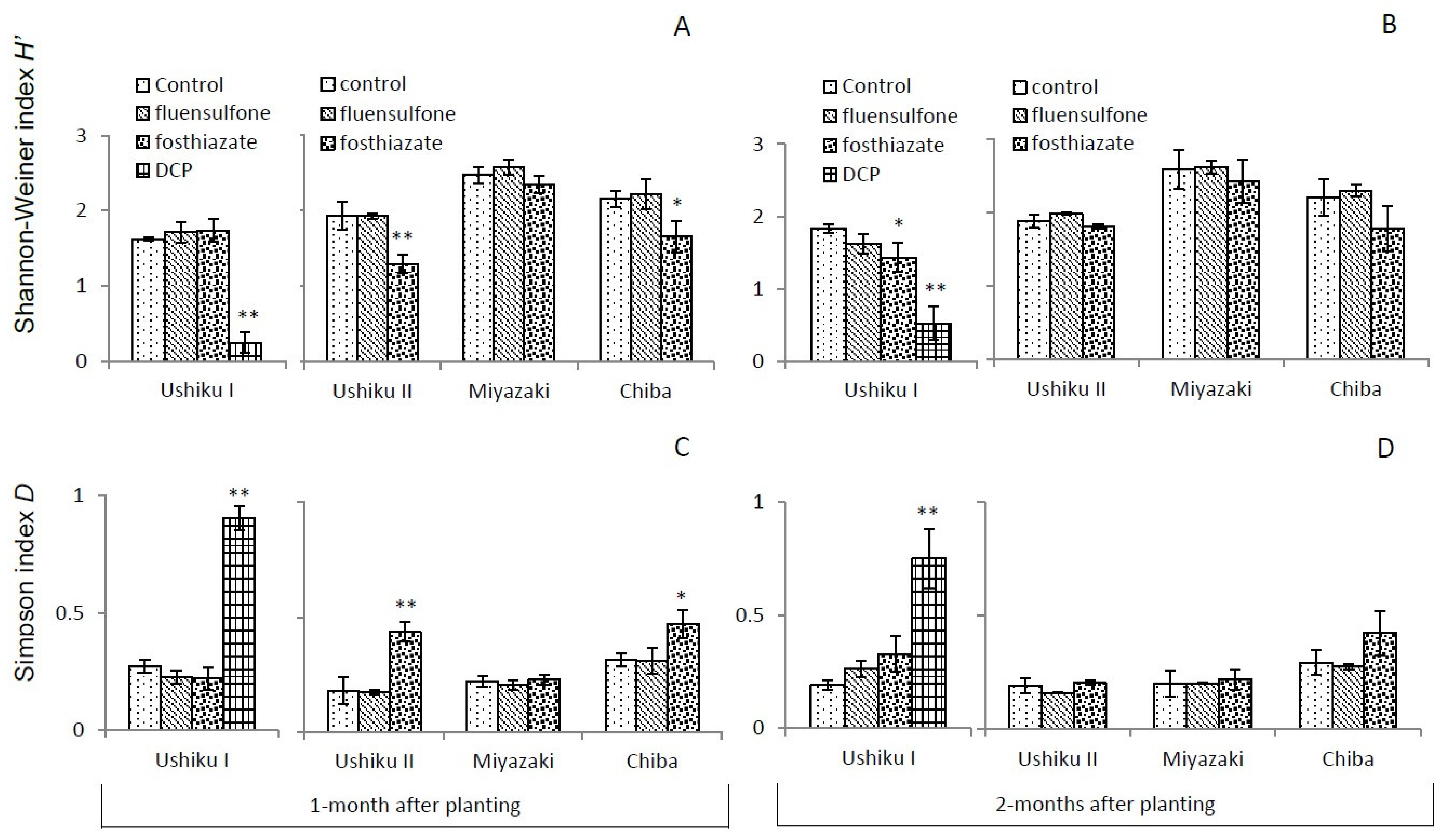 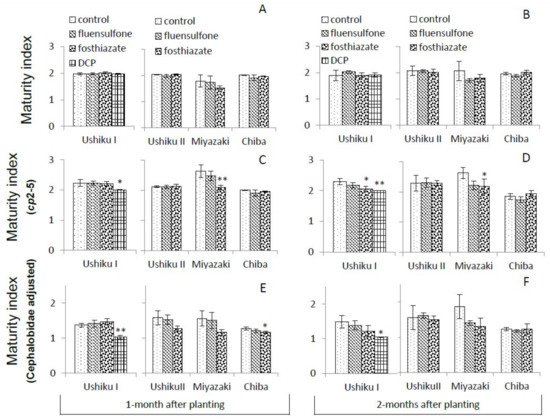 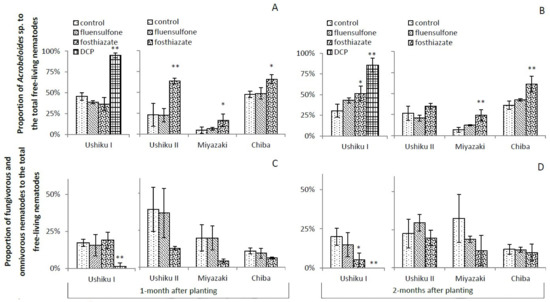 Table 1. Principal component analysis.
Table 1. Principal component analysis.
© 2019 by the authors. Licensee MDPI, Basel, Switzerland. This article is an open access article distributed under the terms and conditions of the Creative Commons Attribution (CC BY) license (http://creativecommons.org/licenses/by/4.0/).
We use cookies on our website to ensure you get the best experience. Read more about our cookies here.
Accept
We have just recently launched a new version of our website. Help us to further improve by taking part in this short 5 minute survey here. here.
Never show this again