Response of Annual Weeds to Glyphosate: Evaluation and Optimization of Application Rate Based on Fecundity-Avoidance Biomass Threshold Criterion
Previous Article in Special Issue

In maize-based cropping systems, leaching of nitrate-nitrogen (NO3-N) to drainage tile and groundwater is a significant problem. The purpose of this study was to assess whether a winter rye cover crop planted after silage maize or soybean harvest and injected with liquid manure could decrease soil NO3-N without reducing the yield of the following maize crop. An experiment was conducted at 19 sites with predominant occurrence of Mollisols (15 out of 19 sites) in the upper Midwest USA immediately after soybean or maize silage harvest to compare a drilled rye cover crop and a non-cover crop control. Later in the fall, liquid swine or dairy manure was injected into the cover crop and control plots. Rye was terminated the following spring using herbicide, usually before reaching 20 to 25 cm in height, and incorporated with tillage at most sites, after which maize was planted and harvested as silage or grain. Across sites, soil NO3-N at rye termination was reduced by 36% (range = 4% to 67%) with rye compared to no rye. Nitrogen in aboveground rye biomass at termination ranged from 5 to 114 kg N ha−1 (mean = 51 kg N ha−1). Across sites, there was no significant difference in yield of maize silage or grain between treatments. These results demonstrate in a Mollisol-dominated region the potential of a winter rye cover crop planted before manure application to effectively reduce soil NO3-N without impacting yield of the following maize crop, thereby reducing risk of negative environmental impacts.
Keywords: cover crop; manure; nitrate; nitrogen; cereal rye; maize cover crop; manure; nitrate; nitrogen; cereal rye; maize

Agricultural intensification over the past few decades has led to degradation of aquatic systems, and the impact of downstream nutrient export from agricultural lands continues to be of concern. Nitrate-nitrogen (NO3-N) is particularly troublesome as it leaches through the soil into subsurface drainage or groundwater, which ultimately leads to surface waters. There are now over 400 aquatic systems across the world experiencing hypoxia due to excess nutrients fueling algal blooms [1].
In the Midwest region of the United States, nutrient losses have been exacerbated by both intensified crop and livestock production. This has led to a large hypoxic, or dead, zone forming annually in the Gulf of Mexico [2,3]. In cropping systems, the use of commercial fertilizers along with increased mineralization of nitrogen from drained soils is problematic [4,5,6]. Where animal feeding operations have concentrated, the amount of manure often exceeds the nearby cropland nutrient needs and manure is treated as more of a waste rather than a resource [7,8]. As an example, the US Department of Agriculture’s (USDA) Agricultural Resource Management Survey found that 95% of manure applications to maize (Zea mays L.) acres did not follow national recommendations for application rate, timing, and placement [9]. In Minnesota, USA, where the headwaters of the Mississippi River, which constitutes a major inflow to the Gulf of Mexico, are located, the 2-year maize-soybean (Glycine max (L.) Merr.) rotation dominates the agricultural landscape, similar to most places in the Midwest [10]. A survey of Minnesota growers found that those using manure applied on average 25.6 kg per hectare more N than recommended for maize [11], and overapplications most notably occurred where maize followed soybean [12].
In the upper Midwest USA, the cold climate adds further challenges to manure management. Due the short growing season and increasingly wet springtime conditions [13], liquid swine (Sus scrofa L.) and dairy cow (Bos taurus L.) manure are frequently applied in the fall prior to planting maize the following spring. However, maize does not begin taking up substantial amounts of nitrogen (N) until the mid-vegetative stages [14]. This creates risk of soil nitrate-nitrogen leaching below the maize rooting zone, since most of the N in liquid swine manure and about one-half in liquid dairy manure is ammonium [15], which is rapidly converted to NO3-N when the soil temperature in the zone of application exceeds 10 °C [16]. This challenge is exacerbated when warm weather and excess precipitation occur between manure application and maize N uptake [5,17,18], which are expected to occur more frequently with climate change [19].
One strategy for managing excess N in soil between cash crops includes using cover crops to take up N and release it following termination. It has been well established that grasses are particularly effective at scavenging N and holding it in the biomass that is produced [20,21,22,23,24], although it is questionable whether N release from the cover crop biomass will synchronize with maize uptake the following growing season. Huntington et al. reported that in a no-till system, N release from hairy vetch (Vicia villosa Roth) and rye (Secale cereale L.) was typically highest after the maize silking stage and thus did not synchronize well with maize uptake [25]. Jahanzad et al. found that forage radish (Raphanus sativus L.) and winter pea (Pisum sativum subsp. arvense L.) decomposed much more quickly than rye and N release was more synchronized with early cash crop N demands, but they also reported that rye had faster decomposition and N release when buried in the soil as opposed to being left on the soil surface after being terminated [26]. In some cases, this lack of synchronization may cause losses in maize yield [27], but on the other hand, many studies have reported minimal or even positive impacts on yields following grass cover crops over the long term [28,29,30,31], particularly when fertilization regimes were optimized [32].
Most studies have evaluated cover crops in systems utilizing commercial fertilizers, but few studies have evaluated use with fall-applied manure. In Ontario Canada, fall cover crops of perennial ryegrass (Lolium perenne L.), oat (Avena sativus L.), and red clover (Trifolium pratense L.) reduced residual soil mineral N by 26% to 42% compared to no cover crop after fall-applied liquid swine manure, but the following year maize grain yield was reduced by up to 15% [33]. In Iowa, USA, Singer et al. found that a rye-oat mixture interseeded into soybean reduced soil NO3-N in the 0–30 cm depth during the early growing season of maize without affecting maize grain yield after liquid swine manure was injected into the growing cover crop the previous fall [34]. In Pennsylvania, USA, maize yields were highest when manure was injected in late fall (November) into a rye cover crop compared with rye being planted after an early application of manure in September, and furthermore, manure injected into the cover crop resulted in better yields than when manure was simply broadcast onto the cover crop [35]. These findings have practical implications for growers because it is counterintuitive to plant a cover crop and then reduce biomass by injecting liquid manure into it.
While there have been some promising results when adding cover crops as a best management practice for fall manure application, this practice has not been evaluated in a cold climate, i.e., the upper Midwestern USA. It is unclear how results from other studies would transfer to this region when the short growing season adds additional constraints. Furthermore, practical applications for growers need to be considered because there has been little reported research conducted on working farms with large scale equipment. To convince growers of the merit of this practice and to increase adoption rates, more on-farm research is needed. The objective of this study was to assess whether a winter rye cover crop planted after silage maize or soybean harvest and injected with liquid swine or dairy manure in the fall could decrease soil NO3-N without reducing yield of the following maize crop.

Across sites, maize silage and grain yields were not significantly influenced by cover cropping (p = 0.252 and p = 0.422, Table 4 and Table 5). Similarly, there was no significant difference in maize N recovery in aboveground biomass with a winter rye cover crop compared to no cover crop (p = 0.412, Table 2).

In these 19 trials conducted in the upper Midwest USA, 15 of which were carried out by commercial growers with their own equipment and management, a rye cover crop was successfully established by drill-seeding following harvest of maize for silage or soybean. Although aboveground fall biomass was limited both by the short growth period prior to freezing and by disturbance from the manure injection equipment, spring growth was sufficient to result in significant N uptake. This study was conducted at sites with predominant occurrence of Mollisols and relatively high soil organic matter levels, hence high soil N mineralization capacity. This, coupled with termination of the rye prior to the reproductive stage by herbicide and tillage and subsequent release of N, may have been partially responsible for the lack of yield reduction of the maize crop following rye compared to no rye. While removing N from exposure to leaching, as demonstrated in these trials as well as in earlier trials in Minnesota, USA [46], Iowa, USA [54] and Illinois, USA [57], the rye cover crop can also reduce soil erosion following the low residue crops of maize harvested for silage and soybean [63,64], an increasing threat as a changing climate in the Upper Midwest results in more intense rainstorms [65]. Reduced nitrate loss to groundwater and surface water and reduced soil erosion, increase the sustainability and reduce the environmental impact of the production system. Future research should focus on understanding the dynamics of nutrient release from grass legumes in a manured system.

This research was funded by a Section 319 grant from the U.S. Environmental Protection Agency through the Minnesota Pollution Control Agency, grant number 103675/PO3000015229, and by funds from the Minnesota Agricultural Experiment Station, University of Minnesota. 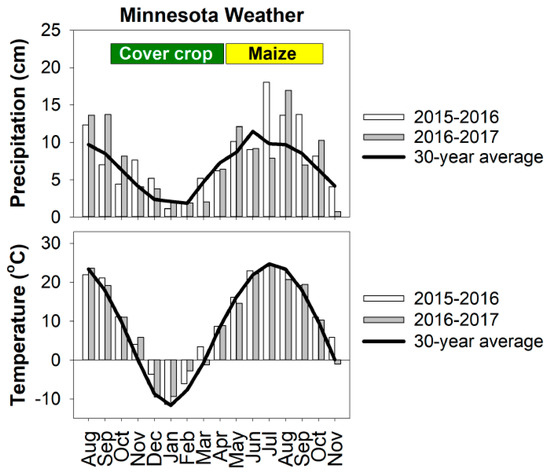 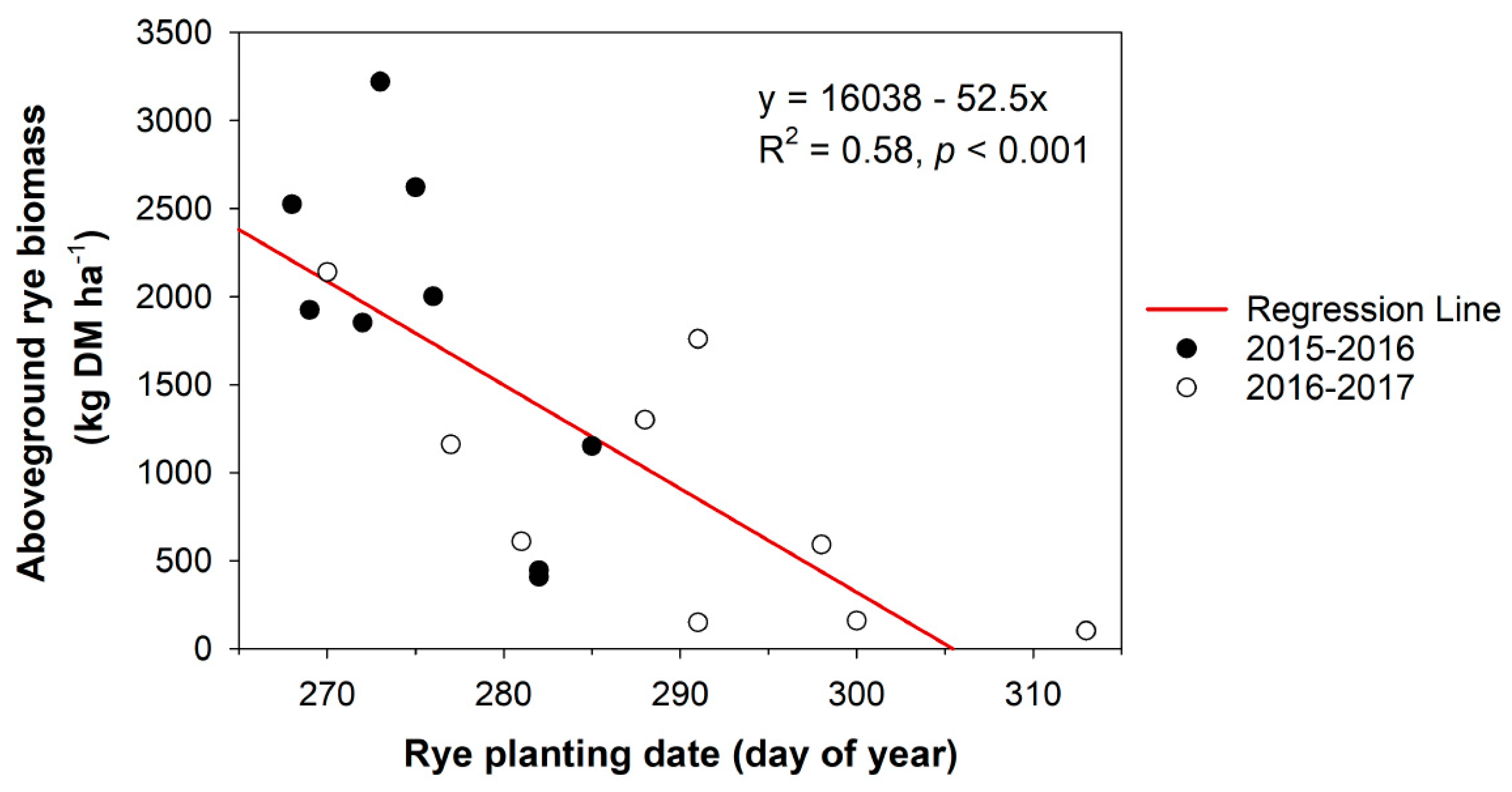