Moderation of Inulin and Polyphenolics Contents in Three Cultivars of Helianthus tuberosus L. by Potassium Fertilization
Next Article in Special Issue

Introducing agro-ecological techniques such as no-tillage systems with cover crops in rotations with soybean (Glycine max (L.) Merr.) could provide more resilience to changing climatic conditions and, at the same time, reduce soil erosion, nitrate leaching, and weed density in the main crop. However, there are challenges in introducing no-tillage techniques in crop systems in Europe as there is little quantitative knowledge about the agro-economic impact. The objectives of this study were to evaluate the agronomic and economic impacts of three soybean cropping systems involving a rye (Secale cereal L.) cover crop prior to soybean, i.e., two no-tillage systems; either herbicide-free with crimping the rye or herbicide-based without rye crimping and one plough-based in which rye was cut as green silage. The impacts of these cropping strategies were compared in a three-year cropping system experiment at a research station in north-eastern Germany with and without irrigation. The following parameters were measured: (1) cover crop biomass; (2) weed biomass; (3) soybean plant density; (4) soybean grain yield; and (5) gross margin of the cropping system. The results showed that all three soybean cropping systems can effectively suppress weeds. System (C), the no-tillage herbicide-based system, produced the lowest rye biomass and highest soybean yield; system (B), the no-tillage herbicide-free/crimped rye system, produced the highest rye biomass and lowest soybean yield compared to system (A), the standard cutting/plough-based system. The differences in rye biomass and soybean yield observed between the three systems could be mainly attributed to the timing of the cover crop termination and the soybean sowing date. The gross margin was highest in system (C), due to the high soybean grain yield. The low soybean grain yield in system (B) resulted in lower revenues and gross margins compared to systems (A) and (C), although system (B) could be economically attractive in organic farming with higher prices for organic soybean. In the particularly dry year 2016, gross margins were higher when soybean was irrigated compared to the rainfed cultivation, due to significantly higher grain yields. Before recommending the application of the no-tillage with cover crop technique for the conditions tested in north-eastern Germany, more investigations on the benefits and risks of this technique are needed. Further research needs to focus on maintaining a high rye biomass as well as on ensuring an early soybean planting date. Optimizing the crimping and drilling equipment is still required in order to develop good management practices for no-tillage herbicide-free systems in European conditions. View Full-Text
Keywords: no-tillage; cover crop; irrigation; weed suppression; gross margin no-tillage; cover crop; irrigation; weed suppression; gross margin
►▼ Show Figures 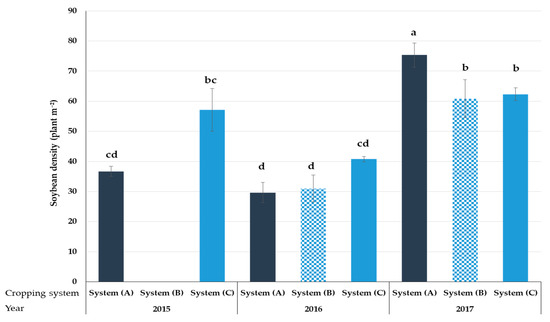