Environmental stressors negatively affect crop growth and yield. Limited information is available about the synergistic use of biochar and plant growth-promoting rhizobacteria (PGPR). A field study was conducted to evaluate the effect of biochar in combination with PGPR (Pseudomonas koreensis and Bacillus coagulans) for alleviating water deficit and saline soil in rice (Oryza sativa L.). Two growing seasons, 2017 and 2018, were examined using twelve combinations of three irrigation intervals every 6 days (I1), 8 days (I2), and 10 days (I3) and four soil treatments (control, PGPR, biochar, and combination of PGPR + biochar) in salt-affected soil. The findings exhibited that synergistic use of biochar and PGPR alleviated the negative effect of these stressors. The integrative use of biochar and PGPR caused an increment in soil moisture content and physicochemical properties. Significant increasing in chlorophyll content, relative water content, stomatal conductance, K+ and K+/Na+ contents occurred with decreasing proline content and Na+ content, which confirmed the efficacy of this approach. As a result, the highest yield and its related traits were attained when biochar and PGPR were added together under irrigation interval I1, which was on par with I2. We concluded that increased nutrients uptake (N, P, and K) were the cause of the superior rice productivity resulting from co-PGPR biochar. Synergistic use of biochar and PGPR could be an effective strategy for improving plant growth and productivity under stressors. View Full-Text
Keywords: water deficit; salt-affected soil; soil moisture constants; rice; soil properties; soil amendments water deficit; salt-affected soil; soil moisture constants; rice; soil properties; soil amendments
►▼ Show Figures 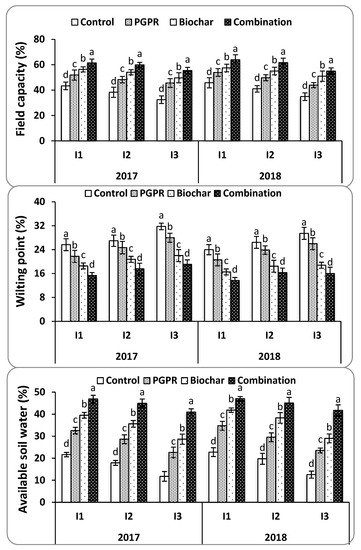