The experiment reported herein involved an irrigated, grain maize (Zea mays L.)-forage oats (Avena sativa L.) rotation and tested several soil tillage practices and residue retention levels. It was located at the “San Luis” Experiment Station of the Instituto Nacional de Investigaciones Forestales, Agricolas y Pecuarias (INIFAP) in Soledad de Graciano Sánchez, San Luis Potosí, Mexico (22°13′35.30″ N 100°50′56.67″ W, 1838 m above sea level).
At the start of the experiment in 1997, the soil was characterized as a xerosol with a sandy clay loam texture and 1.4% organic matter, pH of 8.1 and electric conductivity of 0.81 dS m−1. The electric conductivity of irrigation water was 0.29 dS m−1 and it had a sodium ratio of 1.26. The region has a dry temperate climate with an annual average temperature of 16.8 °C, a frost-free period from April to September, and an annual average rainfall of 332 mm (Figure 1). Monthly averages of precipitation and temperature from 1997 to 2018 were taken from the weather station closest to the trial (Supplementary Table S1).
The seven treatments evaluated consisted of four tillage methods: three conventional and one comprising four variants of permanent raised beds (PB) (Table 1). The three conventional methods were (1) inversion tillage with a disc plow and disk harrowing to a depth of 30 cm (P+D), (2) disk harrowing to a depth of 30 cm (D), and (3) non-inversion tillage with a “multiplow”, a ripper equipped with sweeps to break up the soil at the operating depth (Supplementary Figures S1 and S2), followed by disk harrowing to a depth of 30 cm (M+D). In all three conventional tillage treatments, 1.65 m wide beds were shaped after disking; because all three treatments were disked, the soil was left in a similar condition, with clods of up to 5 cm on the surface. In treatments P+D, D, and M+D, soil preparation took place at the beginning of each maize and oats cycle. The PB were created in 1996 and were 1.65 m wide. Furrows in the PB have been reshaped every five years; the tops of the beds were not tilled during the study period. Furrows in all treatments were approximately 10 cm deep, with some variation in the periods between reshaping (every five years in PB) or remaking (every season in tilled treatments) of the furrows, when they gradually become shallower.
Four levels of soil cover with maize residues were tested on the PB: zero (PB0%), one-third (PB33%), two-thirds (PB66%) and full soil cover (PB100%). The amounts of residue to cover one-third, two-thirds and the entire soil surface correspond to 1.3, 2.6, and 4.0 Mg ha−1, respectively. Residues were applied once a year after maize harvest. For oats, only a 5–10 cm tall stubble was retained. All maize residues were removed after harvest, chopped to 15–20 cm long pieces, and appropriate amounts were returned to the soil. No residue was returned to treatments P+D, D and M+D.
Plots were 8.25 m wide and 30.0 m long. Treatments were evaluated in a randomized complete block design with two replications.
Maize was planted in the spring and oats in the fall each year. In the summer cycles of 2009, 2010 and 2011, and in the winter cycles of 2007-2008, 2008–2009, 2009–2010, 2010-2011 and 2011–2012, the trial lay fallow with no activities, due to budget constraints. In the 2002-2003 oats cycle the crop was lost because of frost damage. Different maize hybrids were used in two periods of the trial, each at their recommended planting density. From 1997 to 2008, white maize hybrid H-311 (INIFAP, Mexico) was used, with a planting density of 50,000 plants ha−1. From 2011 to 2017, the white maize hybrid XR-45 (Ceres, Mexico) was planted at 69,000 plants ha−1. Maize row spacing was 0.825 m. The oat cultivar used was “Chihuahua” with a seeding rate of 80 kg ha−1. Oats were planted in two double rows per bed. The center of the double rows was 0.825 m apart, with 0.20 m between each single row within a double row. Planting was done with a zero tillage planter. The fertilization dose for maize and oats was 200-100-00 (kg ha−1 N-P-K) and 80-40-00 respectively, applying half of N and all of P at sowing time and the other half of N at approximately 35 days after planting.
Before sowing maize and oats, weeds in the PB treatments were controlled with glyphosate (1.4 L a.i. ha−1), whereas in the tilled treatments, weeds were controlled by the tillage operations. In the maize crop, atrazine (0.75 L a.i. ha−1) was applied in the first two weeks after planting in all treatments. Additionally, weeds were controlled mechanically in the tilled treatments approximately 35 days after planting, whereas in the PB treatments manual control was used if necessary. In 2017, nicosulfuron (60 g a.i. ha−1) was applied to control grass weeds in the PB treatments. In the oats season, weed pressure was generally low and only mechanical or manual control was used when necessary in all treatments.
The crops were irrigated according to the conventional local practice, approximately every 18 days by furrow irrigation. Maize was irrigated every 14 days during grain filling. When it rained, irrigation was postponed according to the recorded rainfall. All treatments were irrigated simultaneously. In general, six irrigations of an estimated quantity of 1,000,000 L ha−1 (100 mm) of water were applied per cropping cycle for both crops. Water was applied to the furrows but in treatments with low infiltration rates could cover the top of the beds as well.
Maize and oat forage yields were determined in sampling areas of 10.2 m2. Maize was harvested at 14% grain moisture content and oats were harvested when the grain reached milk or dough stage. Oats moisture content was approximately 70% at harvest, yields were reported as dry biomass. Oats outside the sampling area were harvested with a cutter bar, leaving 5 to 10 cm of stubble on the field. Plant height in maize was measured from the ground to the base of the flag leaf.

From 2015 onwards, production costs were documented. The common local costs to contract each operation were used to calculate production costs. Input prices were obtained from local suppliers. No rent or opportunity costs, no residue costs or income, no income from animals were taken into account, as the analysis only took into account the maize production system. All costs per hectare are expressed in Mexican Peso (MXN), the exchange rate of which fluctuated between 14.5 to 22 MXN per USD between January 2015 and December 2017. Grain prices used to calculate income were $4500, $5200 and $4000 MXN t−1 in 2015, 2016 and 2017, respectively.

The complete dataset is available on Dataverse as “Long-term tillage and residue management experiment in San Luis Potosí, Mexico” at the following link: https://data.cimmyt.org/dataset.xhtml?persistentId=hdl:11529/10548248. Statistical analysis of the effect of the treatments on grain yield and soil quality parameters was performed in R 3.1.1 (R core team, Vienna, Austria) using the ‘glm’ and ‘aov’ functions from the ‘stats’ package. The growing cycle and the repetition were considered random factors. Post-hoc analysis was performed using the ‘HSD’ function from the ‘agricolae’ package which performs a Tukey test.

Maize production costs were lower for PB treatments because of the elimination of tillage. The difference was small however, only $1,211 MXN ha−1 on average. Soil preparation accounted for about 11–13% of the total cost in the conventional tillage treatments, while it only accounted for 1% of the total production costs in PB treatments (Table 4). In all treatments, fertilization was the major cost, accounting on average for 22–24% of production costs, while irrigation accounted for 29–31% of the cost. The difference between the highest production cost and the lowest was on average $1,533 MXN ha−1, ranging between $20,189 MXN ha−1 for PB treatments in 2015 and $26,670 MXN ha−1 for P+D in 2016 (Table 5). In contrast, the difference between the highest and lowest total income was on average $22,564 MXN ha−1, ranging from -$12,060 MXN ha−1 for D in 2017 to $56,680 MXN ha−1 for PB66% in 2016. The major impact of conservation agriculture on net income was therefore due to the higher yields, which generated higher total income for these treatments, rather than to the cost reduction due to reduced tillage (Table 5).

Organic carbon content and P Bray were significantly higher in the PB treatments in the 0–5 cm layer (Figure 4). Contents of highly soluble nutrients such as nitrates, Na, K, and S tended to be higher in conventional tillage in the 0–5 cm layer than under PB, leading to higher electric conductivity in this layer under conventional tillage (Supplementary Table S2). On the other hand, Bray-P, organic matter, Fe and Mn were higher in the 0–5 cm and 5–30 cm layers under PB. No clear tendency was observed for P-Olsen, Cu, Zn, Ca, Mg or B. Significant differences between tillage and PB treatments were found in organic matter and Bray phosphorous content in the 0 to 5 cm layer and potassium and sodium in the 5 to 30 cm layer, whereas the differences in other chemical parameters were not significant.
No significant differences were observed in soil bulk density or penetration resistance at any depth, indicating that there was no soil compaction under PB and without tillage for more than 20 years. Direct infiltration was not significantly different between treatments, mainly due to the moment of measuring. The soil was dry at the moment of measuring; water infiltrated readily into the soil pores in the PB treatments but mainly through cracks under conventional tillage. A different moment or method of measuring infiltration might have indicated large differences; for example, irrigation water infiltrates rapidly (3 h 5 min on average) in the PB, whereas in conventional tillage treatments infiltration takes 4 full days due to surface sealing. However, differences in MWD under wet or dry sieving, which could be indicative of differences in soil structural integrity, were not statistically significant, even though the data indicate that aggregate distribution and stability is larger in the PB treatments (Figure 5). No differences in soil quality were observed between the treatments with different levels of soil cover.

Conservation agriculture with permanent raised beds (PB) led to improvements in soil quality that sustained higher maize and oat yields than treatments with tillage. Maize yielded on average 1.2 Mg ha−1 more in PB with the hybrid used from 1997 to 2008 and 3.9 Mg ha−1 more with the hybrid used from 2012 to 2017. Two factors potentially contributed to the larger yield difference for maize in the second period. First, due to soil degradation in the tilled treatments, the irrigation water took several days to infiltrate, reducing the effective growing cycle of the crop, whereas with PB the same quantity of water infiltrated in a couple of hours. Second, the cultivar used in the second period had a higher yield potential and thus was able to take advantage of the improved conditions on PB. Permanent raised beds generated on average $18,424 MXN ha−1 more profit than the tilled treatments, mainly due to the increased yield in those treatments, and increased soil organic carbon on average 63% at 0 to 5 cm depth and 32% at 5 to 30 cm depth. The level of residue cover did not cause significant differences between PB treatments, probably because the soil was almost continuously covered by either the maize or oats crop. The trial showed that conservation agriculture, with PB and residue cover ranging from little to full residue cover, is a viable and sustainable option in similar production systems.

This work was implemented by CIMMYT and INIFAP as part of the project “MasAgro Productor”, made possible by the generous support of SADER, Mexico, and is part of the CGIAR Research Program on Maize (MAIZE) with generous support from W1&W2 donors, which include the Governments of Australia, Belgium, Canada, China, France, India, Japan, Korea, Mexico, Netherlands, New Zealand, Norway, Sweden, Switzerland, U.K., U.S., and the World Bank. Any opinions, findings, conclusion, or recommendations expressed in this publication are those of the authors and do not necessarily reflect the view of the donors mentioned previously. 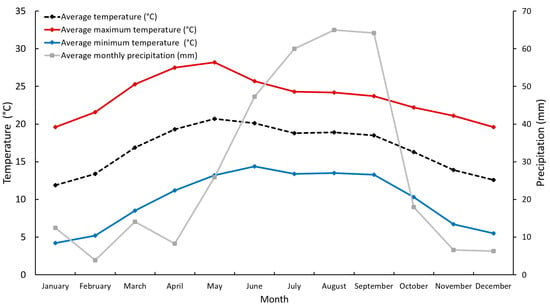 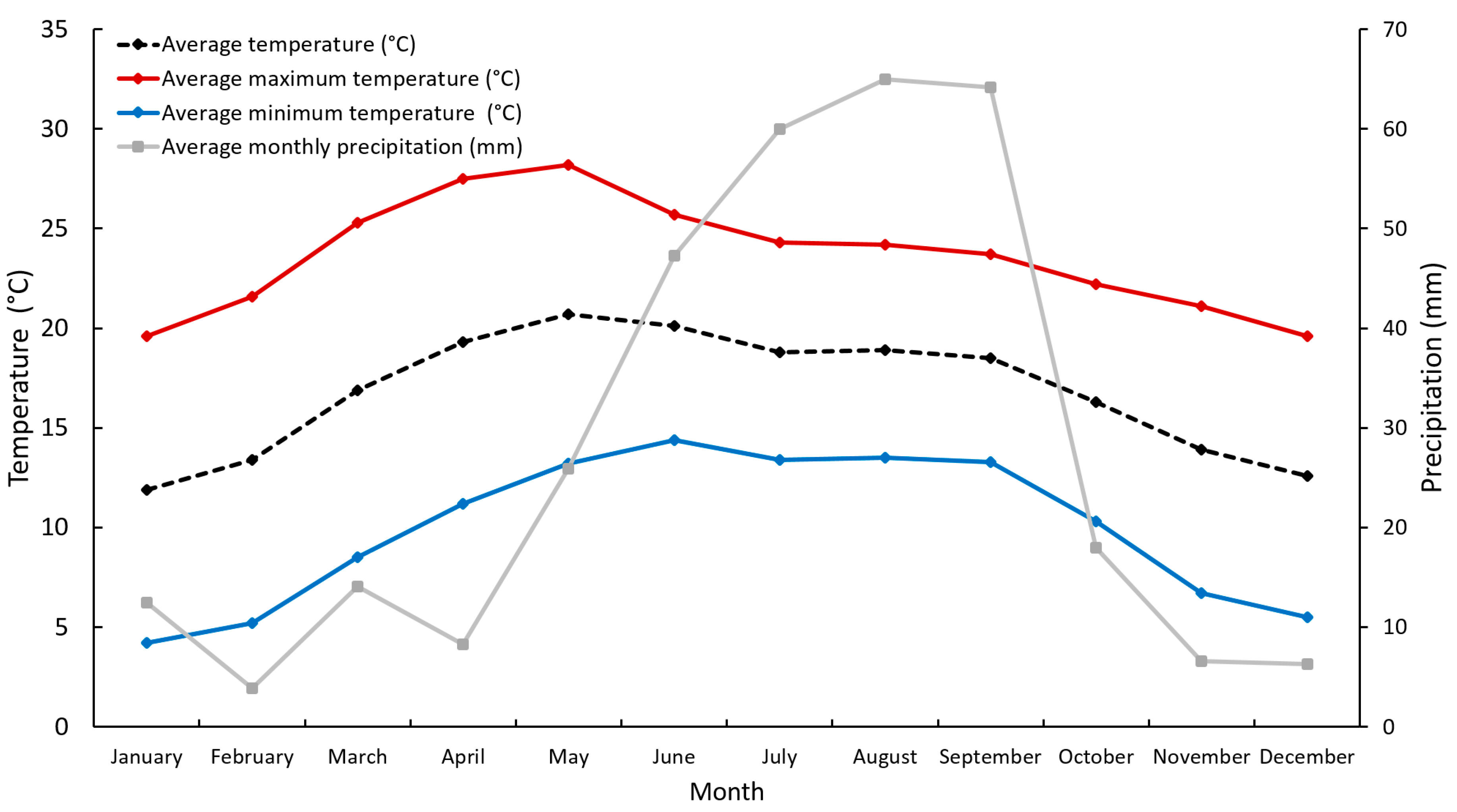 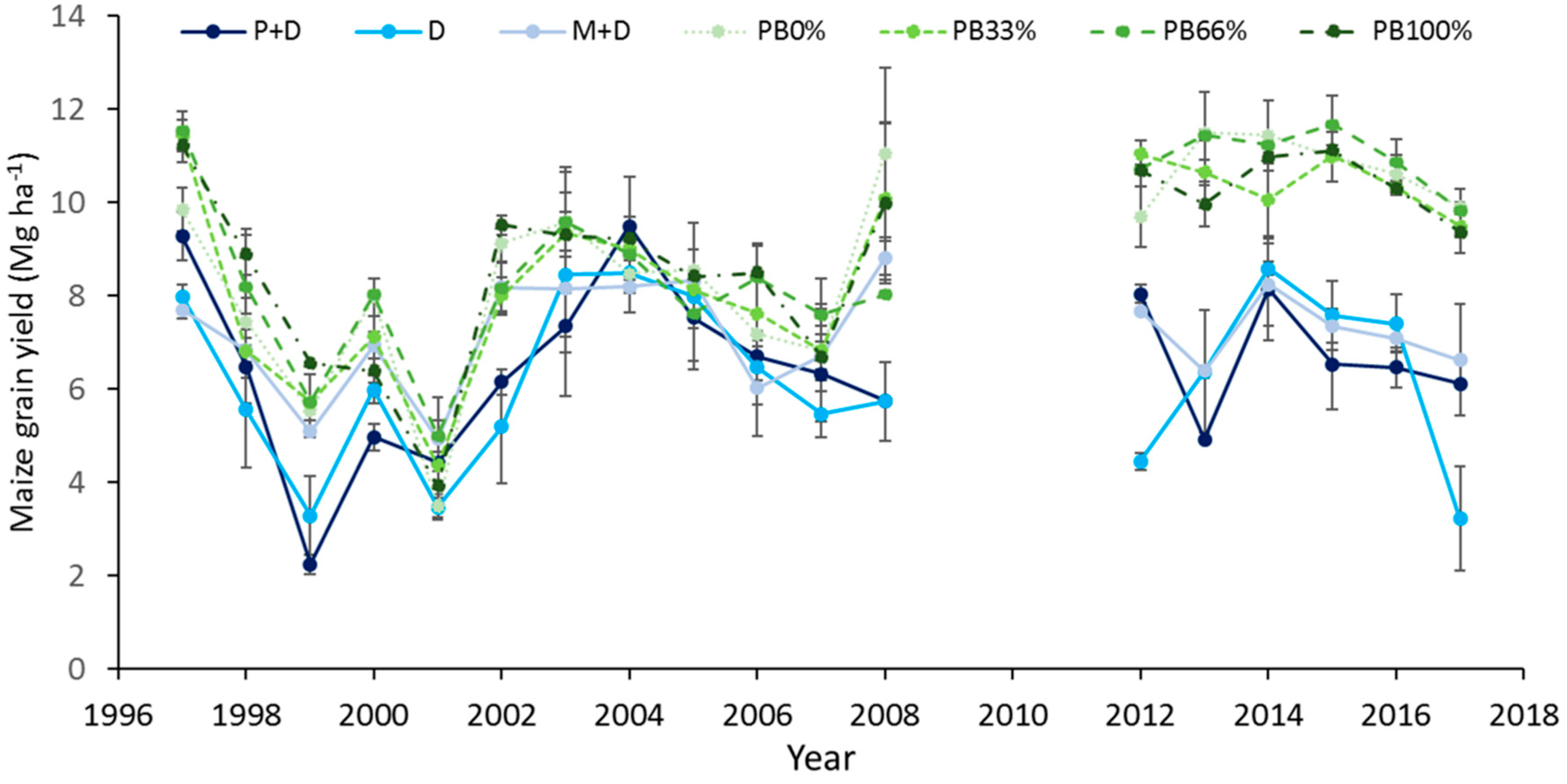 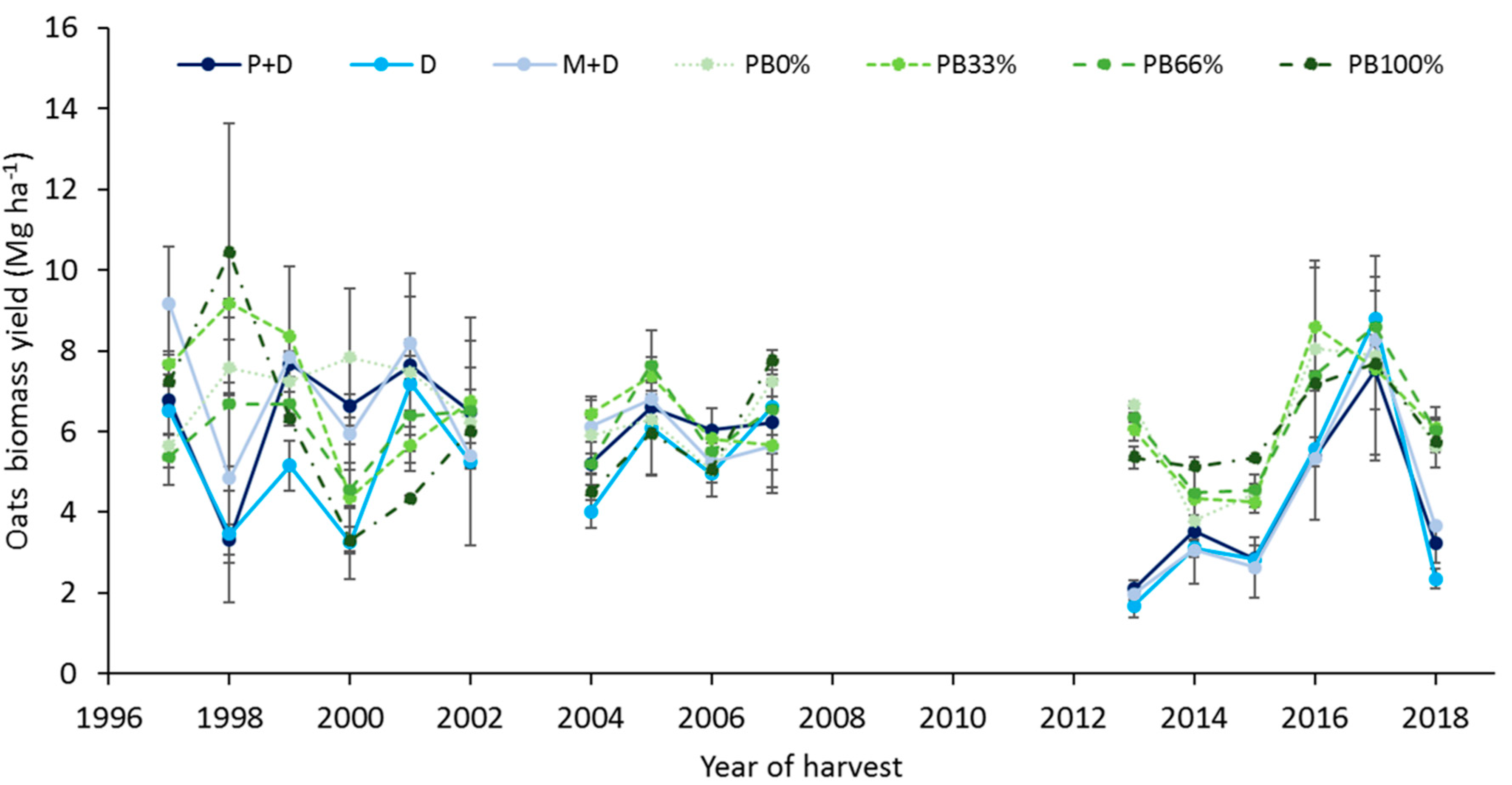 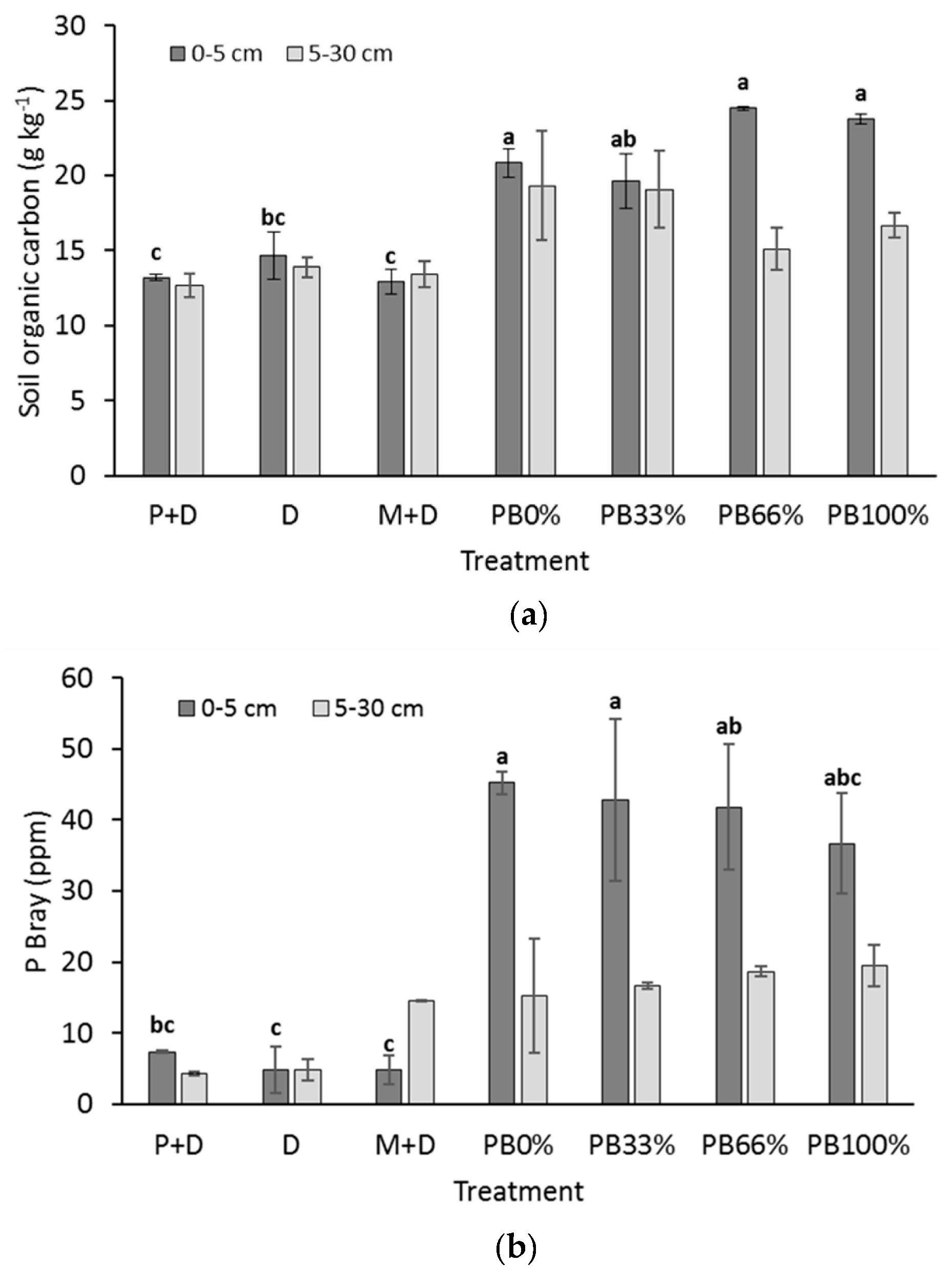 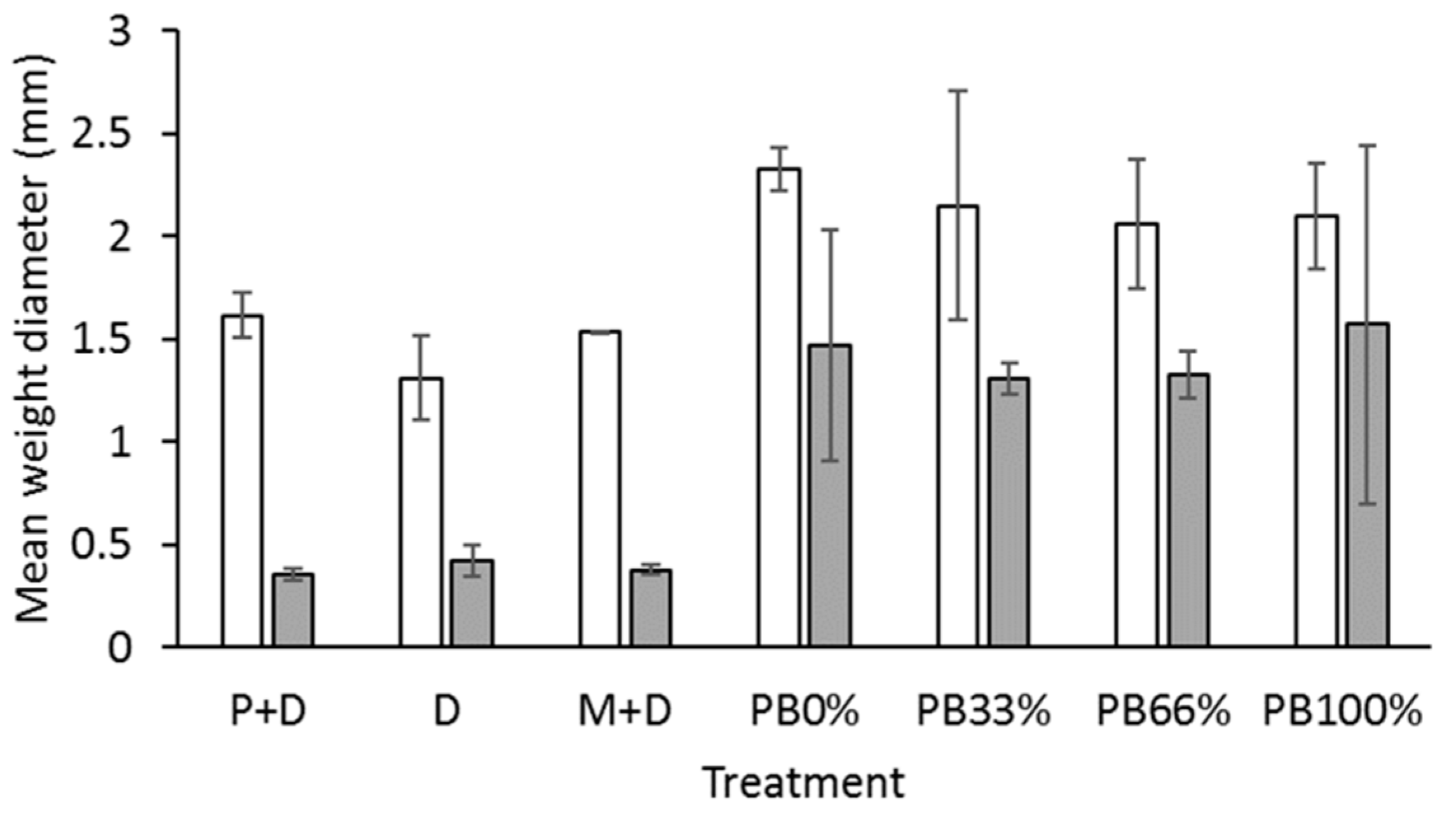